The Wild Is Calling - 405 Magazine 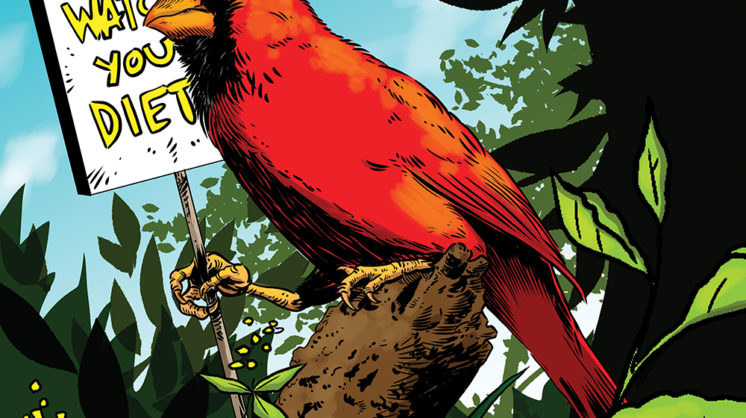 As a city girl whose exposure to wildlife had come exclusively from petting zoos, I’ve been woefully unprepared for life in the country for the past couple of years. The Beau feels a certain “oneness” with nature that I don’t care to know. While he knows the names of most of the bugs, I call them all “sonofabitch.” Instead of defending me against a toddler-eating tarantula on the back patio, the Beau gently ushers it toward the flowerbed, where it’ll only grow larger and more bitter. “He’s a good spider,” the Beau will say. “You want that kind of spider around,” he’ll add, essentially sentencing me to a sleepless night or five.

The daytime critters seem harmless, like a combination of the petting zoo and the happy animals from the woods that flutter about Snow White. Almost daily, a conga line of 25 wild turkeys trots by. A flock of peacocks lives a half mile away. (They’re less flashy than you’d think.) Chickens live next door, geese and herons fly overhead and a couple of dozen cardinals live in the backyard.

When I mentioned the cardinals to my friend, Joe the Navajo, he suddenly became nervous and said, “Those are all dead people! You know that, right? What do they want from you?”
“Black sunflower seeds!” I reply.

Dead people? Dead people should feel sorry for me. The 40-pound raccoon and the five opossums I’ve caught on the bird feeder in the middle of the night already haunt me. The armadillos that refuse to replace their divots across the lawn already haunt me. The great horned owl with the 8-foot wingspan that lives in my backyard in a tree 80 feet over my head haunts me, in large part because we all look like field mice from that distance.

The Beau’s theory is slightly less macabre than Joe’s “flock of grim reapers” theory. The cardinals, he suggests, are spirit guides. I’d like to believe it’s true, but that theory comes from the same guy who thinks that finding a wolf spider in the closet is good luck. The only way to be sure is to consult a dictionary of Power Animals and Spirit Guides.

The Power Animals and Spirit Guides handbook explains that spirits often appear to us in animal form to teach and guide us, or to deliver a message from beyond. The book gives the following descriptions of what their messages could be, but two years of swatting, trapping, chasing and running from all creatures great and small might provide a more down-to-earth translation:

Turkey: You’re about to receive a gift. (Translation: We left you a gift under your bird feeder.)

Spider: You need some time alone. (Translation: I can’t catch two humans in my web at a time, but if I ever catch you alone, you’re mine.)

Opossum: You’re stressed out. (Translation: Wow. You’re up late. Did you know your bird feeder can hold 30 pounds?)

Mouse: Pay attention to detail. (Translation: Tell me if you see that owl. Also, you’re low on black sunflower seeds.)

Armadillo: It’s time to retreat, rather than making headway. (Translation: Go back inside and forget about winning Yard of the Month. Ever.)

Raccoon: Your deceased loved ones are sending you a message. (Translation: The message from beyond is don’t leave the bird feeder out at night.)