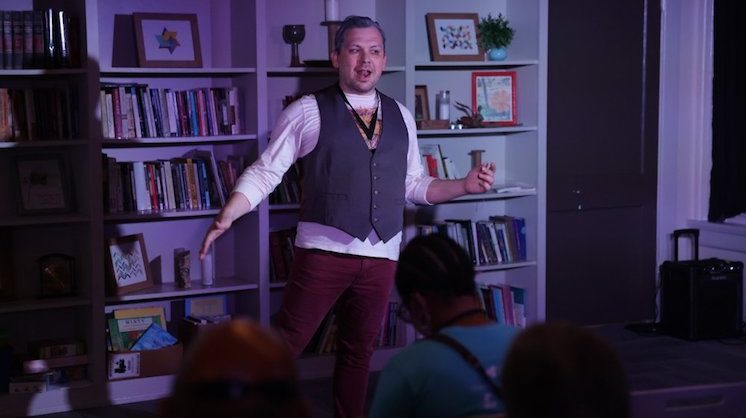 After a few years of living in Oklahoma City, Adam and Jenny Brand noticed an abundance of talented theater people with great ideas and few outlets through which to showcase them. Both of them knew with the technical onslaught that comes with staging a production — finding a venue, establishing a box office, getting event insurance, hiring technicians to run the show — because they organize theater for a living.

“If we just set up the framework so that all the artist has to do is show up and make art, that would be a service to everyone in town who want to make art,” said Adam Brand. The couple founded the Theatre Crude Fringe Festival in 2019 to provide a creative space for artists to craft small unconventional and engaging performances.

Now, Theatre Crude returns to Oklahoma City Sept. 15-24 with a diverse and inventive lineup of 20 in-person and virtual short shows and workshops. The works range from one-act plays to spoken word and puppetry to an interactive seance.

The festival fills each day with multiple performances lasting one hour or less in duration, with 30 minute intermissions separating the shows. This rapid-fire schedule is meant to expose attendees to stories and forms of theater they might not experience otherwise, Brand said.

“The best way to experience this festival is to stick around and see whatever is next without knowing anything about it,” he said. “Just let yourself be surprised.”

Even Brand has little clue how each show will go until days before its first performance when it runs a tech rehearsal. So how does the team decide which shows make the lineup?

When artists pitch a show, they “just have to sell us on the idea,” Brand said. “We have criteria: Does it blur genre lines? Is it a unique story that hasn’t been told anywhere else in town? Is it a brand-new work? And how excited are you about it? One of the things we like to say is we’re not looking for the best of the best. We’re looking for the most passionate of the passionate.”

Some shows might require elaborate staging and lighting, and others might consist of just a person on stage, but the ardent creativity of the performers make each show unique and compelling. The results are often unrefined but full of potential, which is partly the inspiration behind the festival’s name, along with Oklahoma’s oil history. “There’s value in all of it,” Brand said. “We’ve got a lot of people playing around with ideas that are a little bit different than your traditional theater.”

One local performance, The CatMaster Cycle, comprises three absurdist shorts about cats and sentience. Another local one, titled Be Kind, Rewind, is a 1992-themed magic show. Out-of-town productions include God’s Work, a hip-hop dance piece by twin brothers from North Carolina.

Several shows take advantage of the small-scale nature of fringe theater by getting close to audience members in the front row or using audience participation. Oklahoma actor Rebecca McCauley’s Play On Seance asks viewers to help mediums connect to the spiritual world.

Out of the 11 in-person shows the festival is hosting, nine of them are local productions. Two of the five virtual performances are from local artists as well. “We provide that little outlet when you have that little idea that doesn’t fit into what your (theater) company is trying to do,” Brand said.

Someday, he hopes the festival can expand to an outdoor block party with multiple venues and food vendors. But for now, Theatre Crude is steadily growing. “We’re slowly finding more and more people who find this style of entertainment as exciting and interesting as we do.”

You can find more information about the lineup of shows and a full schedule of the 2022 Theatre Crude Fringe Festival on its website.