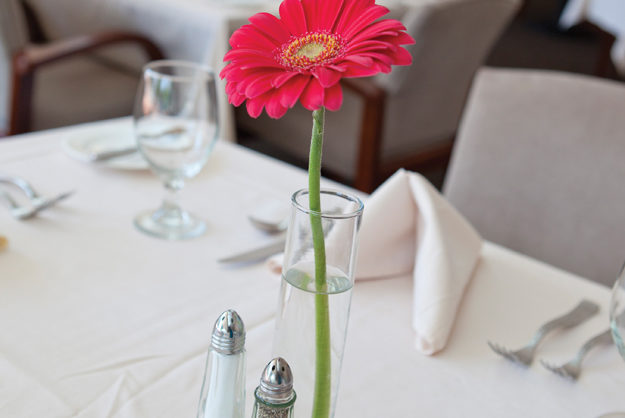 Ambience is a crucial component of the dining experience – orchids or tealights on the table don’t make the food taste any different than a handful of broken crayons or a singing plastic fish would, but each of our senses can affect our enjoyment of the others. In a beautiful setting, a good meal just seems better. In a setting as beautiful as the OKC Museum of Art, brunch seems like the best in the state.

That’s the verdict from Open Table, an online restaurant reservation service that polled its users about their favorite eateries; compiled from over five million reviews of more than 12,000 restaurants nationwide, its list of 100 Best Restaurants for Brunch 2012 includes exactly one Oklahoma establishment: the Museum Cafe.

Admittedly, that’s not a scientific proof – not every restaurant uses Open Table, and not everyone who enjoys a meal takes the time to register their approval. Still, achieving such a high level of popularity among its patrons is an accomplishment in and of itself, and if you have any questions about the excellence of the experience, the Museum Cafe staff would be very happy to show off its metropolitan atmosphere, exceptional service and superb cuisine on the Sunday of your choice. Reservations are recommended; call 235.6262 or visit okcmoa.com/eat… or use opentable.com. And don’t expect to find any crayons.

aris has Vélib’, London has Barclay’s Cycle Hire, Shanghai has Forever Bicycle, Rio de Janeiro has Bikerio… and now Oklahoma City has Spokies. Urban centers around the world have incorporated bicycle sharing systems as an alternative to motorized public transportation or private vehicles, providing users with short-distance transportation that’s environmentally friendly and personally healthy without the demands of buying, storing and maintaining their own bikes. And with the ongoing revitalization and repopulation of downtown OKC (consider the impending Core to Shore park along the Oklahoma River), the City of Oklahoma City’s Office of Sustainability and Downtown OKC, Inc. decided this was the perfect time to introduce the progressive concept.

Bikes can be checked out and returned seven days a week at automated kiosks as part of yearly, monthly or daily memberships; the program was introduced in May with six locations providing docking spaces for 97 bicycles. Some initial problems with the Spokies software led to incidents of vandalism and theft, prompting a temporary shutdown for retooling – this is why we can’t have nice things, people! – but the system has had its tune-up and the program is back in the saddle. For kiosk locations, pricing structure and more information, visit spokiesokc.com.

ankind domesticated cattle around 8000 B.C., which means we as a species have been enjoying delicious beef for a solid 10,000 years. You’d think that in that time we would have learned everything there is to know about eating cow parts, wouldn’t you?

“Meat specialist” Tony Mata, with help from Chicago chef Rick Gresh and Jake Nelson of OSU’s Robert M. Kerr Food and Agricultural Processing Center, has found a cut of meat that’s reputedly every bit as tender and flavorful as current fine dining favorites while coming from part of the cow that’s generally rendered into hamburger. Whereabouts? They can’t say – or, rather, won’t – because they’re in the process of trying to patent the specific knife strokes used to produce their beefy brainchild: the Vegas Strip Steak®. Unveiled in April, it’s already available from a handful of distributors and on the menu at restaurants in Chicago and Boise; if you’re salivating with interest, read more at vegasstripsteak.com.

The satisfaction of a lengthy, arduous job brought successfully to its conclusion, of seeing a cherished vision made reality after years of effort and hope, is its own reward. Also rewarding: having your efforts recognized as exceptional. The Oklahoma Tourism and Recreation Department and Oklahoma Travel Industry Association have presented the 2012 RedBud Award for Outstanding New Attraction in Oklahoma to the Chickasaw Cultural Center in Sulphur. The honor caps off an amazing beginning for the 109-acre campus housing a traditional tribal village, educational cultural exhibits, carefully tended gardens, a 350-seat theatre and outdoor amphitheatre, native art and more – over 100,000 visitors since its opening have experienced the results of its devotion to sharing in and celebrating the Chickasaw culture, a triumphant milestone that’s all the sweeter thanks to this new cause for celebration.

What I Read on My Summer Staycation, by Steve Gill

It’s a vast, varied, beautiful world out there, full of sights to see and wonders to behold… but it’s also full of books I haven’t read yet, and a bunch of those are already at my house, just waiting to be carried out to the hammock on balmy afternoons. I might not make it through all of them, but these are the written worlds on my travel agenda for summer 2012. See anything you like?

Patrick O’Brian
The Commodore through 21

The continuing story of the seafaring adventures shared by Royal Navy officer “Lucky” Jack Aubrey and Stephen Maturin, a physician, naturalist and clandestine intelligence agent. (You might remember the 2003 movie “Master and Commander: The Far Side of the World,” starring Russell Crowe and Paul Bettany – those are the chaps in question.)

These are the last four novels in the series and the fragment of another left unfinished at O’Brian’s death, but it’s not as massive an undertaking as it sounds; they’re immensely enjoyable, breezy reads with propulsive action sequences and surprisingly funny, if dry, dialogue between characters I quickly came to treasure. I’m 16 books in and I’ll genuinely be sorry to reach the end and bid them a final farewell.

A chronicle of GM Billy Beane’s attempt to make the underfunded Oakland A’s successful by concentrating on players’ statistical performances instead of the experienced opinions of scouts and coaches.

My wife read the book after we both saw the movie, and preferred the book because it delves way more deeply into the stats and the mathematics involved. I’m not as fond of baseball as she is, nor of math, but the film – which I enjoyed – was at its best when dealing with those subjects rather than Beane’s personal life, and while I might quietly skip any formulae I come across, it’s a relief to know the book is unlikely to contain a heartwarmingly supportive teenage girl who sings the same cloyingly awful pop song like three times in two hours for NO REASON AT ALL.

A weary, brutalized journalist rebuilds his great-grandfather’s estate in southern Lebanon in what the dust jacket calls “an unforgettable meditation on war, exile, rebirth and the universal longing for home”… so you can tell right away it’s going to be a laugh riot.

It will probably be the heaviest thing I attempt this summer in terms of tone and subject matter, but Shadid has impressive credentials (universally respected journalist, two Pulitzer Prizes, OKC native) and I have an ongoing fascination with the idea – I think the Spanish word is querencia – of developing a spiritual connection to a specific place that goes beyond shelter or familiarity; it’s your haven and refreshes your soul while becoming a part of your identity, even in absentia. I got the impression from reading a few articles in the wake of Shadid’s untimely death that the title house had become that kind of haven for him (his wife chose that spot as his resting place), and I’m looking forward to his description of finding his place of peace.

This, on the other hand, should be lighthearted – or at least funny, since it’s the sequel to the exquisitely clever The Eyre Affair and its cavalcade of literary references, linguistic playfulness, pulp adventure, trans-dimensional romance and the occasional breathtakingly awful pun. I’m a big fan. I haven’t read even the back cover of Fforde’s second effort, as (a) I’m by nature spoiler-averse, and (b) the alternate universe inhabited by literary detective Thursday Next and populated with such wonders as the Prose Portal – which allows the user to enter classic literature and interact with its characters – was more than entertaining enough the first time around to prompt this purchase sight unseen.

A collection of unrelated short stories (and a few poems), it’ll be for filling in gaps here and there rather than bolting through all at once. Probably. Given my previous encounters with Gaiman – devouring novels Neverwhere, American Gods and Anansi Boys, rereading his graphic epic Sandman multiple times and still finding new nuances and connections each time through – it might be difficult to leave off after a couple of anecdotes. And considering his penchant for dreamlike imagery, slightly unhinged reality and a general air of disquiet and/or melancholy, it might be better saved for a dark, rainy autumn evening.

If knowledge is power, these schools are dynamos: Newsweek has released its 2012 list of the top 1,000 public high schools in America (based on components including graduation rate, college acceptance rate, use of and performance in AP classes and SAT/ACT scores), and while Gatton Academy of Mathematics and Science in Kentucky took the top spot, here’s how Oklahoma stacked up:

Also, Edmond North ranked #696 in U.S. News & World Report’s list but was not ranked in Newsweek.

It's the season for visual spectacle, as residents across the country come together to enjoy all the colors of the rainbow: strontium, calcium, sodium, barium, copper, cesium and potassium. Need some illumination? Check out pbs.org/wgbh/nova/kaboom for a burst of insight into how fireworks work and the chemistry and craft of pyrotechnics.

Speaking of explosions, everybody recognizes the 1812 Overture as a great cataclysmic capper to a patriotic concert, but it’s easy to forget the patria in question is technically Russia, as Tchaikovsky wrote the piece to celebrate his country’s defeat of Napoleon’s invasion. Why is it a staple of U.S. Independence Day performances? Pretty much entirely because of the bombastic finale. Plus, it’s an automatic tradition – once you own the cannons, you’re pretty much stuck with the opus… unless you want to use the hardware in a classical arrangement of “For Those About to Rock (We Salute You).”

Grin and Bear It

hey come from Canada and the Cook Islands, Venezuela and Vietnam, Ireland and Israel and the Ivory Coast, and though their cultural backgrounds and even native languages differ widely, their goals for this month are markedly similar: Run faster. Jump higher. Be stronger. Dig deeper. Seize the opportunity to stand up in front of the world and prove that they’re the best there is at what they do. The pinnacle of athletic achievement is found in London at the Games of the 30th Olympiad, July 27-August 12.

By the end of the assembly, 302 events will have been contested in 26 sports – including, for the first time, women’s boxing – and even though the opening ceremonies (overseen by Oscar-winning director Danny Boyle) aren’t until late this month, the symbol of that commencement is well on its way: the Olympic torch was lit May 10 in Olympia, then carried across Greece to Athens and flown (still lit) to Cornwall. It has spent the intervening time being relayed around the British Isles; by the time it reaches the Olympic stadium in London it will have been carried across land, water and air by a total of 8,000 people… including football star David Beckham.