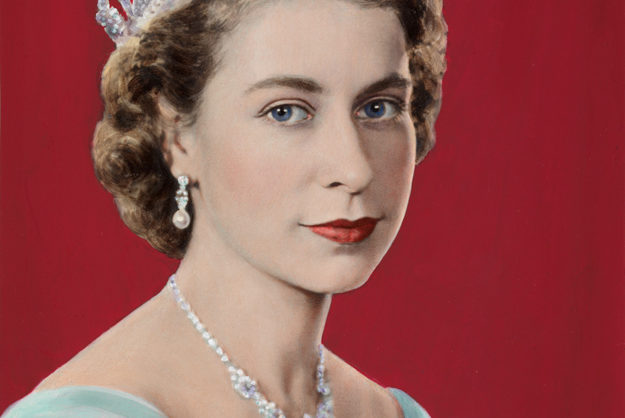 Long May She Reign

What are you doing for your birthday? Dinner, movie, maybe a schmancy gourmet cupcake? You probably won’t be having a million people watch you star in a 1,000-boat river parade while Andrew Lloyd Webber writes a special song to cap off the star-studded nationally televised concert in your honor… but then again, you haven’t spent the last 60 years as Queen of the United Kingdom of Great Britain and Northern Ireland, Head of the Commonwealth and Defender of the Faith. The Diamond Jubilee of Queen Elizabeth II celebrates the first 60 years of Her Majesty’s reign (only Victoria has ruled England longer) in thoroughly regal fashion – a year of celebrations centers around the weekend of June 2-5, the Queen’s Official Birthday. No word yet on whether there will be cake, although the network of 2,012 beacons to be lit throughout the U.K. and the Commonwealth should do nicely as candles.

In the Marvel universe, they are Earth’s Mightiest Heroes; in our universe, they might well be called Marvel’s Mightiest Moneymakers. “The Avengers” is one of 2012’s most anticipated blockbusters, partly because it assembles characters from five films already released by Marvel Studios – films that have already made over $2.2 billion worldwide. But it’s been a while since the series began, so the Harkins Bricktown 16 theatre is offering superfans a chance to brush up via The Ultimate Avengers Marathon on May 3: back-to-back showings of “The Incredible Hulk,” “Iron Man,” “Iron Man 2,” “Thor” in 3D and “Captain America” in 3D, culminating in a midnight premiere of “The Avengers” in 3D, all for one bargain price. If the prospect makes you say “Make Mine Harkins,” head to the Bricktown box office or visit harkinstheatres.com/avengers. Excelsior!

As spring blossoms into summer, it becomes more and more tempting to spend more and more time outdoors… even though there are at any given moment about 10 quintillion insects out there with you. (That’s an actual estimate from the Smithsonian Institute.) That means that one useful thing to learn this season, in addition to where your local pharmacy keeps the Deep Woods Off!, is the Schmidt Sting Pain Index, a highly painstaking metric formulated by entomologist and researcher Justin Schmidt of Arizona’s Southwest Biological Institute. Schmidt has traveled the world being pierced, prodded and pincered by the worst nature has to offer, and arranged his sufferings in order of severity, complete with personal descriptions evocative of a wine list: the 1.0 sting of a sweat bee is “light, ephemeral, almost fruity; a tiny spark has singed a single hair on your arm,” while the red harvester ant’s 3.0 bite is more “bold and unrelenting – somebody is using a drill to excavate your ingrown toenail.” The 0-4 scale not only offers some perspective – at least you weren’t zapped by the 4.0 Central American bullet ant – but allows for more erudite-sounding complaints. Instead of “Owww, it hurrrts!” you can say “Argh! That must be at least a 2.5!”

And speaking of quantifying suffering, New Mexico State University’s Chili Pepper Institute has named a new champion: as of February 2012, the world’s hottest pepper is officially the Trinidad Moruga Scorpion, clocking in at up to two million units on the Scoville Scale (roughly ten times worse than a habanero). So, you know, maybe try to just eat a couple.

Oklahoma residents tend to keep an eye on the skies this time of year, but those with a creative streak should have weather on their minds for a different reason entirely: the National Weather Center at the University of Oklahoma has teamed up with the Fred Jones Jr. Museum of Art and the Norman Arts Council to produce a biennale exhibition – the first national juried show featuring meteorological art. Anyone over 18 can submit up to three paintings, photos or works on paper; three local experts will select the top 100 entries for the exhibit, which will fill the National Weather Center in Norman April 22-June 2 in 2013… and prizes totaling a whopping $25,000 will be awarded to the most radiant pieces. So if you’ve been struck by a bolt of inspiration, visit nwcbiennale.org to register. On October 1, the opportunity will be gone with the wind.

For nearly a century, the American College of Surgeons has held its members to high standards of medical practice; its Commission on Cancer has spent nine decades encouraging more outstanding work in treating the disease. Accreditation by the Commission is serious business too, only given to facilities that voluntarily commit to exceptional cancer care and undergo a rigorous evaluation process. So when the Commission gives Outstanding Achievement Awards to the best among its already exemplary members, it’s high praise indeed… and that means congratulations are in order to Oklahoma City’s St. Anthony Hospital and INTEGRIS Baptist Medical Center, which with Comanche County Memorial Hospital in Lawton are the only three state facilities to receive the award for 2011.