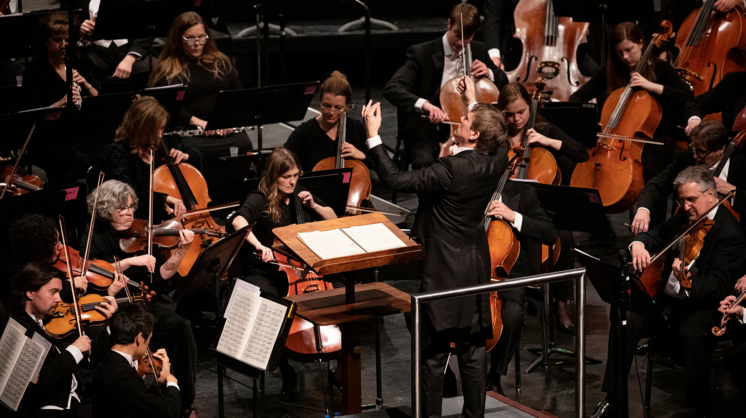 Full season ahead with the OKC Philharmonic.

Take your seats — the Oklahoma City Philharmonic is tuning up for a performance season designed to excite all music lovers. Returning with fresh installments of the Classics and Pops Concert Series, the Phil’s slate for the upcoming months features everything from Disney to a brand-new composition that should make Oklahoma proud.

“Coming out of COVID, we wanted to feature music that is thrilling, inspiring, contemplative, spiritual, wild, meditative and fun,” said music director Alexander Mickelthwate. “Music that reaches the entire emotional spectrum on the highest artistic level, with some of the biggest stars in classical music. And music that tells our stories, Oklahoma stories. Music that will make us proud.”

In the new year, the Classics Series continues with “Nordic Soundscapes” Jan. 7, which includes three songs by quirky Icelandic singer-songwriter Björk. “The Rite of Spring” concert Feb. 4 features Daniel Hsu on piano. The titular orchestral work is known as one of the biggest scandals in the history of music: The Stravinsky piece sparked a riot in the crowd at its 1913 premiere, with fighting among patrons, objects being thrown at the stage and, allegedly, someone even being challenged to a duel. Guest artist and percussionist Evelyn Glennie will appear in “Sight and Sound” on March 4. Glennie is perhaps the most famous percussion soloist in the world; she is profoundly deaf and often will perform barefoot during live performances to help her feel the music.

Superstar violinist Joshua Bell will join the OKC Philharmonic April 15 to perform Mendelssohn’s Violin Concerto in E Minor, Op. 64 and Symphony No. 7 in A Major, Op. 92 by Beethoven. “Oklahoma Stories – Clara Luper Centennial,” coming May 13, features Hannibal Lokumbe’s premiere of Trials, Tears, Transcendence: The Journey of Clara Luper. Lokumbe, a jazz trumpeter, was commissioned to write this piece by the Oklahoma City Philharmonic as a tribute for Clara Luper’s 100th birthday. Luper’s daughter, Marilyn Luper Hildreth, was thrilled about this upcoming performance. “It’s quite an honor,” she said. “My mother worked so hard for civil rights. She wanted Oklahoma to be different. She felt that all of us could get along in this melting pot we call democracy.”

For more information on the Oklahoma City Philharmonic and its upcoming season, or to purchase tickets, visit okcphil.org.