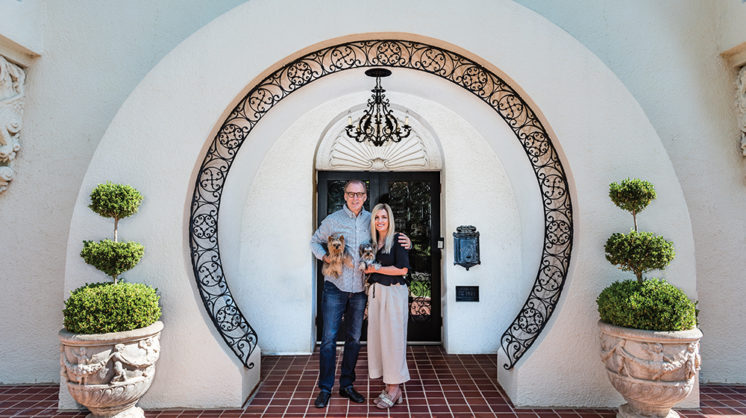 When you get near Susan and Ralph McCoy’s elegant and historic home in Heritage Hills with its unique rounded “keyhole entry,” there’s a good chance you’ll spot them outside talking to passing neighbors. On occasion, you can catch them for a front-yard croquet match or enjoy a relaxing evening on their porch.

The neighborhood is just one of the things that the McCoys have loved about their home since they moved into it two years ago. They walk to nearby restaurants such as Stella Modern Italian Cuisine, Barrios Fine Mexican Dishes, Hank’s Coffee Shop and 1492 New World Latin Cuisine. They love the sidewalks and the front porches that get neighbors outside and talking to each other.

“The sidewalks are so incredible because it just reminds me of the past. It’s like a wonderful expression of going back to the simple,” Susan says, and added that she loves the community feel. 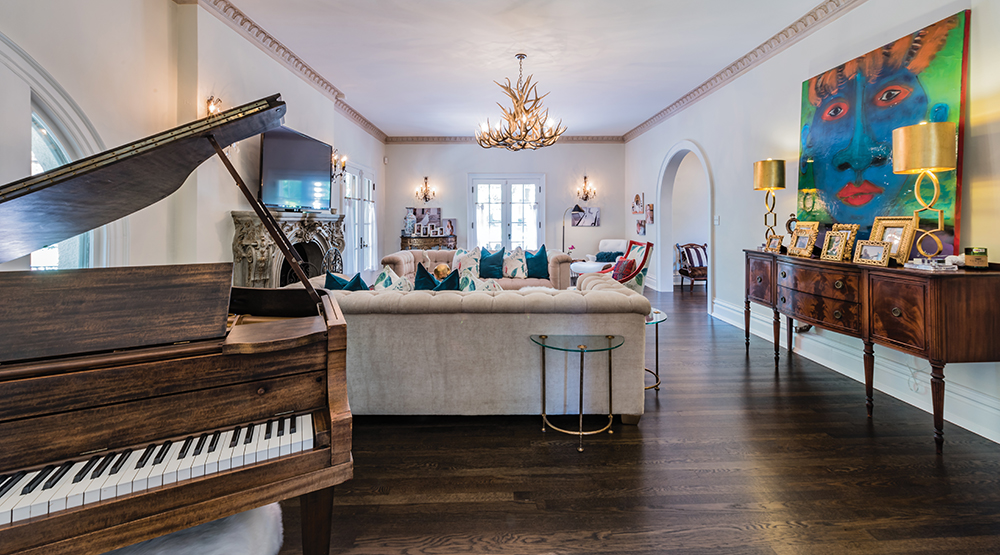 But just as welcoming as the neighborhood is the historic home they inhabit and the decorative touches that they have given it.  Officially, the home was built in 1923, although the project spanned several years during that time frame. Its first owner was Ben Barnes, a local entrepreneur, whose vision included the arches, decorative balconies and the keyhole entry ringed with wrought iron that still are part of the front porch today. The architecture, including those features, is considered “Mediterranean with Moorish influences,” according to Heritage Hills history.

Through the years, the home has been a regular stop on the Heritage Hills Historic Homes Tour; even though the McCoys have only lived in the house the last two years, they already have welcomed people as an official home tour stop.

“When you’re in these houses – I really feel like we are caretakers of it and we get to live here,” Susan says. “It’s not my house. It has to be everybody’s house.”

Ralph said initially he and his wife were drawn to the iconic architecture of the house from the outside. But once inside, they also were attracted by the “amazing entry” that is “beautifully featured” in the home’s design.

They both the love the large rooms and the intimate spaces for gathering, and have entertained frequently. Out back, their charming carriage house over the garage, complete with its own kitchen, regularly hosts out-of-town guests of the Oklahoma City Ballet, an organization they support.

“The house has such a very welcoming, yet a really peaceful, spirit,” Susan says. “I can’t even explain it.”

During a tour of the home, Susan talks lovingly of its permanent details and the careful thought they gave in decorating it. Their decor and furniture feature a mix of antiques and contemporary pieces, and include lots of color. Many of the house’s original features – including the wrought-iron front door, the floors, the ornate plaster details on ceilings and fireplace and more – have been preserved.

During Prohibition, the basement was used to hide Scotch sneaked in on a train from Chicago.

There’s still a bar down there after the ’90s remodel that gave the space its dark mahogany shelves, though the gold color that originally adorned the ceiling has been relocated to a guest bathroom. The ceiling’s stalactites were removed, too … after a guest hit his head. In a personal update, the basement is now home to a painting of Susan’s family homestead in Noble County, Oklahoma, where her family members were wheat farmers. Her dad’s cousin, Faith Hinkle, was the artist. 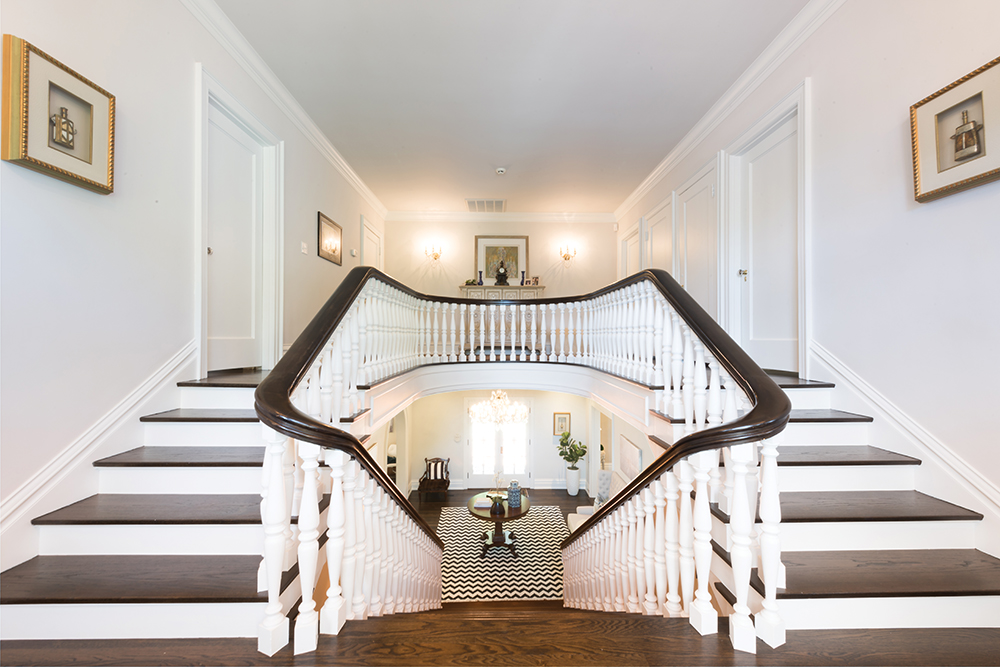 Everywhere you look, you see objects that mean something to the McCoys, reflect the home’s nearly 100-year-old heritage or add a splash of contemporary color that draws the eye. The back stairs are striped like a rainbow; the men’s bathroom still has its original marble. The guest bedroom’s wood trim is the same light brown as the home’s original wood, though the wood colors elsewhere have been updated. Throughout the home, Susan has used vintage Persian rugs to add splashes of color, and her garden, featuring flowers, old trees and vegetables, is as colorful and warm as the interior.

In the McCoys’ kitchen, covered in blue and white Delft from a 1980s remodel, Susan shows where a pantry was added to the outside of the home’s footprint in the 1930s. She points out the wall leading to it, once external, and notes that the walls of the entire structure are similarly 18 inches thick. She also enjoys that the tiny hallway is slightly crooked, reflecting the craftsmanship of the hands who did that work so long ago.

Susan said she and Ralph hadn’t planned on moving to Heritage Hills until their daughters, Morgan Murray and Madison Rosser, moved to the area with their husbands. But now they have fully embraced the neighborhood – and the people in it.

“We found that the people in the neighborhood cherish the homes and lifestyle we now enjoy,” Ralph says, “as well as the forethought and amazing skill and detail the craftsmen at the time put into these amazing homes.”