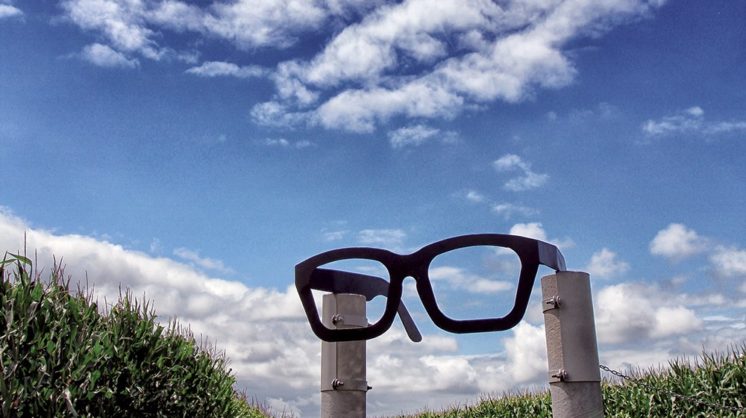 The place where the dead men’s wallets were found is at the end of a grassy path, off a dirt road, off another dirt road, in a cornfield near the Iowa-Minnesota border.

There are no billboards, no directional signs, no interpretive plaques. No admission fees. No souvenirs for sale.

What is there is a pair of giant glasses balanced between a couple of posts, in a sea of landlocked cornfields at the unpaved corner of the improbably urban-sounding 315th Street and Gull Avenue, marking the trailhead of a half-mile path to the site where rock ’n’ roll’s first tragedy occurred on Feb. 3, 1959.

The bodies of teen idols Buddy Holly, Ritchie Valens and J.P. Richardson, known as the Big Bopper, were discovered that morning, eight hours after a four-seat, red-and-white Beechcraft Bonanza piloted by 21-year-old Roger Peterson had taken off in a snowstorm.

Five wallets were discovered in the wreckage. The names taken from the IDs within were announced as killed in the crash. Four of the wallets were on or near the bodies; the fifth was found in the plane near Holly. It was stuffed fat with the paperwork of life: torn notebook paper with names and numbers of musicians and song lineups, black-and-white family photos, a deposit slip from First State Bank, an invoice from Shook Tire Company, a receipt from Hammon Master Cleaners (Lawton’s Finest!) and one for a new amp for a 1958 Fender Stratocaster.

Tommy was the 12th of 13 children of Thomas Jerry Allsup and Retta Maude Blakemore Allsup. His mother, a member of the Cherokee Nation, was registered on the Dawes Roll at the age of 7. Tommy was born Nov. 24, 1931, on her allotment in Owasso. He later said of his Depression-era upbringing: “Everybody was broke so you didn’t know you were poor until you called your dog to feed them and they wouldn’t come. Then you knew you were poor.”

At the time of the crash, the 27-year-old guitarist was a veteran performer. He had formed the Oklahoma Swingbillies and Tommy Allsup’s Range Riders before being hired by Johnnie Lee Wills, who followed his brother Bob and the Texas Playboys, to play regularly at Cain’s Ballroom.

The band was one of four rock acts promoted as the Winter Dance Party. The series of dance-hall concerts through the frozen heart of the Midwest played 24 towns in 24 days, saving money by sleeping on the bus between gigs.

The tour promoter arranged for the musicians to be transported by old-school buses, which broke down time after time in the subzero temperatures. Conditions were so bad that Bunch was left behind in Michigan, hospitalized with frostbitten feet. Reporting on the incident, the local Iron County Miner noted: “The men were lightly dressed and suffered from extreme cold of 35 below zero that morning with no heat in the bus while they waited for someone to come along.” The bus that pulled into Clear Lake, Iowa, from Green Bay on Feb. 2 was the musicians’ sixth vehicle in 10 days.

An exhausted Holly decided enough was enough. He chartered a plane for after the Iowa gig in the hope of getting to Fargo in time to do his laundry, take a shower and get some solid sleep in a warm bed. He offered his guitarists the remaining two seats, figuring the $108 – $36 each when split three ways – charter flight of 440 miles would be a good investment in keeping their sanity.

As word of the plane spread, other musicians wanted in. Waylon Jennings pitied the ailing Richardson, who was battling the flu, and accepted The Big Bopper’s offer of his new sleeping bag in return for his seat on the flight. Allsup, however, was determined to escape the frigid bus, rebuffing the pleas for his seat by 17-year-old singer Ritchie Valens – said to be so unprepared for the weather that he was traveling without a winter coat.

After the Winter Dance Party’s two sets at the Surf Ballroom, Holly, Richardson and Allsup were packed up and about to head for the airport when Allsup ran back into the club one more time, double-checking that there was nothing left behind. 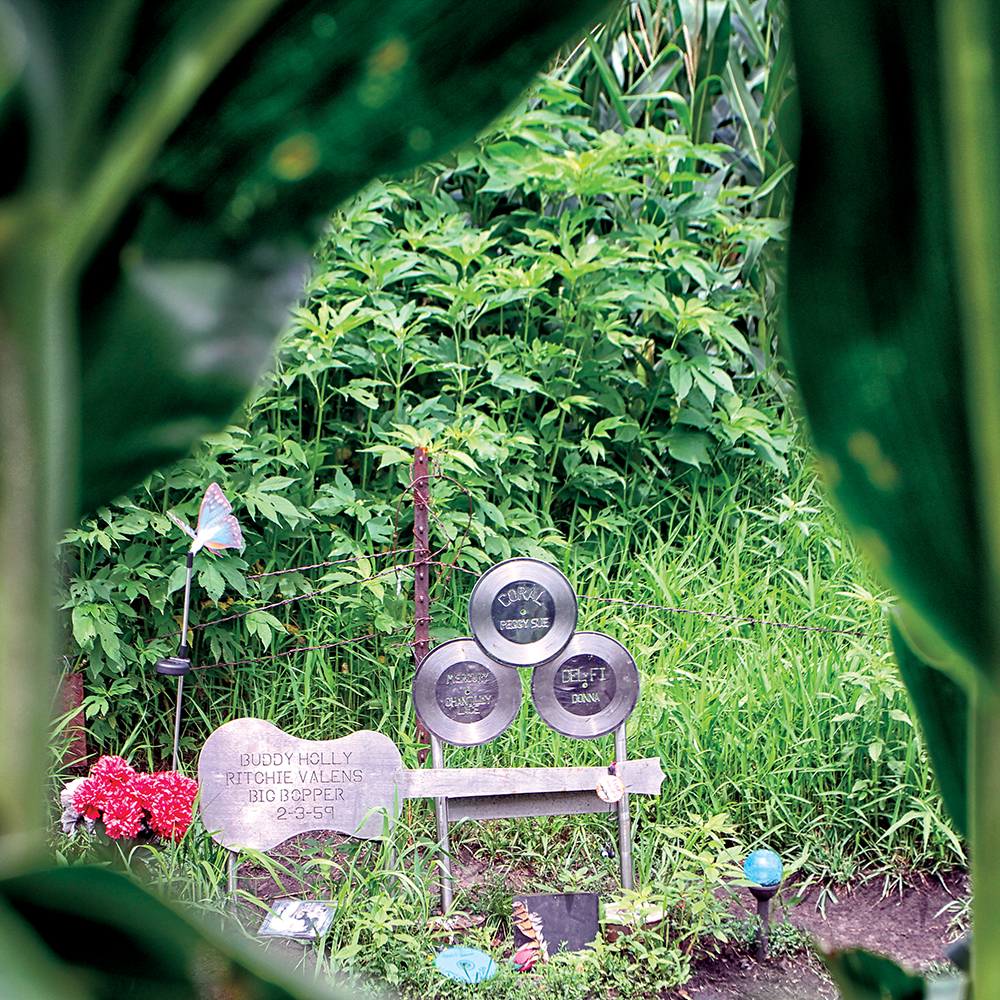 Thinking the group had already left, an excited Valens, who had been signing autographs, tried one last time to talk Allsup out of his seat. Allsup offered a compromise: “I’ll tell ya what: let’s flip for it.” And so they did. Valens called heads, and heads it was.

“That’s the first time I’ve ever won anything in my life,” Valens said as he went to collect his belongings off the bus.

Allsup pocketed the half-dollar, took his loss in stride and went outside to tell Holly the change of plans. He asked Holly to pick up a registered letter that his mother had mailed general delivery to the Fargo post office.

“Sure thing. But I’ll need your ID,” Holly said. In the freezing Iowa night, an exhausted Allsup tried to fish out identification from his wallet. Holly was impatient to get going. Just give me the whole wallet, he said. I’ll give it back to you later.

And so it happened that Tommy Allsup boarded the bus with the equipment, fellow Cricket Waylon Jennings and the rest of the musicians from the tour, while Valens drove off happily to the airport with Holly and Richardson.

Within the hour, the plane would be shattered in the frozen cornfield, its occupants killed on impact at an estimated 170 miles per hour.

The wire services reported the five fatalities, based on the IDs found at the scene. Back in Oklahoma, a frantic neighbor was trying to phone Mrs. Allsup to tell her the news before she heard it on the radio.

The band’s survivors found out around noon, as they checked into Moorhead’s Hotel Comstock. Tommy was able to reach his mother before the news hit, telling her of the coin flip and the last-minute change of plans.

The band went on that night in a daze and, at the promoter’s insistence, continued the tour … for a cut rate, because most of the big-name draws were no longer performing.

Jennings later told of how Holly needled him about not taking the plane, joking: “I hope your damned bus freezes up again.” Jennings’ reply, which haunted him for years: “Well, I hope your ol’ plane crashes.” He never forgave himself.

Allsup’s wife at the time had a belt made for him, featuring the lucky 50-cent piece fashioned into a custom buckle shaped like a horseshoe. At last report, the talisman was kept tucked away in a safe-deposit box. In the late ’80s, he opened a short-lived honky-tonk in Dallas – Tommy’s Heads Up Saloon, a reference to the lucky toss.

As time marched on, the plane crash stood for some as the moment America lost its bobby-sox innocence, ending the giddy effervescence following World War II and ushering in a decade marked by civil unrest, political assassinations, the Vietnam War and a new cynicism.

Thirteen years later, folk singer Don McLean immortalized the tragedy with the epic 8-minute, 33-second hit “American Pie.” It was an ode to the end of an era. He declared Feb. 3, 1959, “The Day the Music Died.”

Tommy Allsup’s wallet made its way back home in 1977. On a lunch break from a recording session of a studio album – ironically enough, Don McLean’s tribute to Buddy Holly – he went to check his mail, returning with a small box with an Iowa postmark and return address from the Cerro Gordo County Sheriff’s Department. Inside: the worn leather wallet and its contents, recovered from the wreckage. 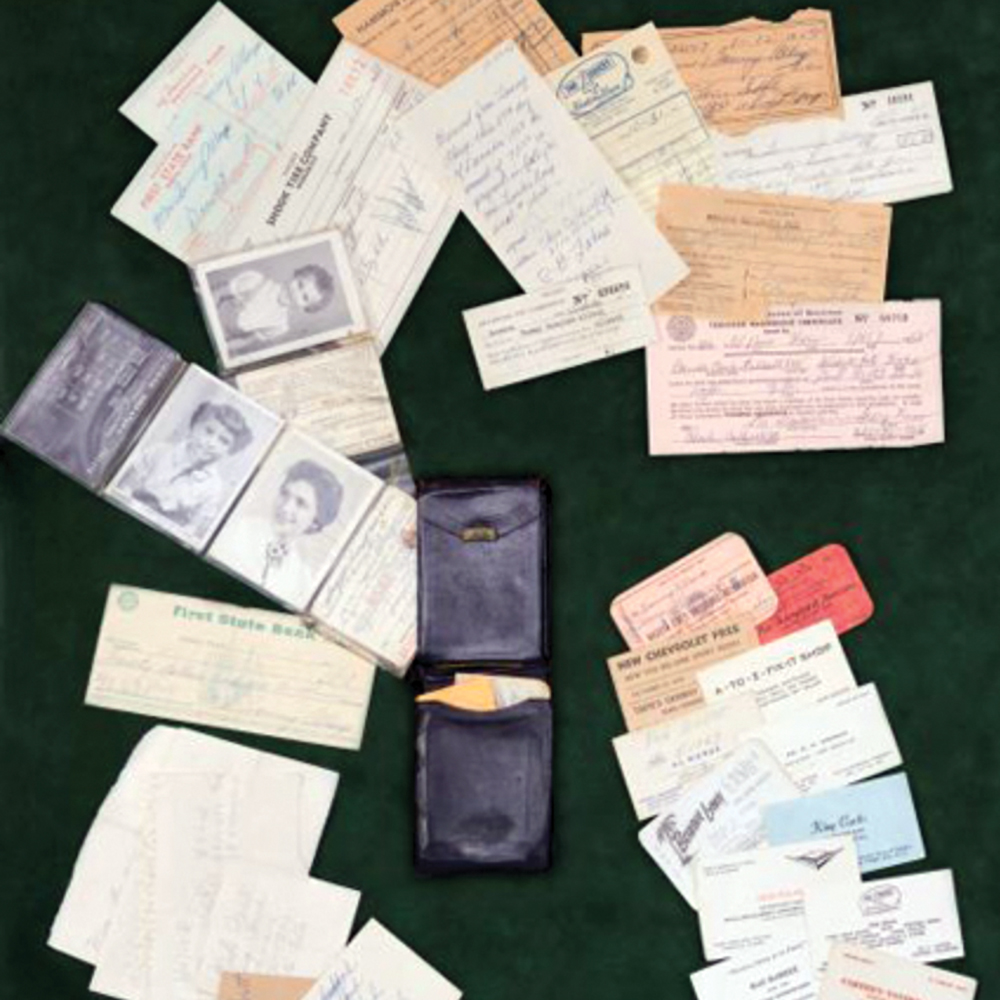 McLean blanched when Allsup showed him, and took an hour-long break from the session. When he returned, Allsup recalled, a shaken McLean declared: “We’re going to do some original songs. We’re not doing any more Buddy Holly songs.”

Allsup kept performing and producing until the end, touring at home and abroad, winning accolades including a Grammy Award and induction into the Oklahoma Music Hall of Fame.

Vince Gill performed at his memorial service. Paul McCartney, who considered him one of rock’s greatest guitarists, sent flowers.

Late in his life, Allsup talked to an interviewer about the February night: “I still think about it nearly 60 years later. I’m mighty thankful to still be here. I don’t really dwell on it any more than I have to.

“I guess my philosophy just makes me keep looking forward. I try to forget about yesterday, since I can’t do anything about what’s already happened. I know I don’t have tomorrow, ’cause it’s not here yet. Mostly, I can only do something about today, so I try to live it to the fullest and do what I’m supposed to.

“You can’t dwell on the past. You just have to keep moving on.”

His wallet, however, continues to tour. In the 1990s, it made its way into the world’s largest collection of rock memorabilia. It now tours the nation, from music festivals to concert venues, as part of Hard Rock Cafe International’s “Gone Too Soon” exhibition.

Jeff Nolan manages Hard Rock’s archive of treasures. As curator and historian for the 80,000-piece collection of pop music memorabilia, including tricked-out guitars, sequined costumes and framed gold records, he is often asked which is his favorite.

His answer, in interview after interview: Tommy Allsup’s wallet. More than one surprised interviewer then follows up: Who is Tommy Allsup? Nolan will smile, and begin to tell the tale of the 12th of 13 children born on his mother’s allotment in Owasso, who won by losing a flip of a coin.

‘It Gave Me the Chills’

Eighteen-year-old Robert Zimmerman of Hibbing, Minn., was in attendance at the Jan. 31, 1959, concert at the Duluth Armory to watch Buddy Holly and the Crickets perform on the Winter Dance Party tour. Two nights later, Holly died in the fatal plane crash. More than half a century later, the musician now known as Bob Dylan credited that evening as a key to his artistic success, noting in his June 5, 2017, lecture in accepting the Nobel Prize for Literature:

“If I was to go back to the dawning of it all, I guess I’d have to start with Buddy Holly. Buddy died when I was about 18 and he was 22. From the moment I first heard him, I felt akin … He was the archetype. Everything I wasn’t and wanted to be. I saw him only but once, and that was a few days before he was gone. I had to travel a hundred miles to get to see him play, and I wasn’t disappointed. He was powerful and electrifying and had a commanding presence. I was only six feet away. He was mesmerizing. I watched his face, his hands, the way he tapped his foot, his big black glasses, the eyes behind the glasses, the way he held his guitar, the way he stood, his neat suit. Everything about him. He looked older than 22. Something about him seemed permanent, and he filled me with conviction. Then, out of the blue, the most uncanny thing happened. He looked me right straight dead in the eye, and he transmitted something. Something I didn’t know what. And it gave me the chills.”