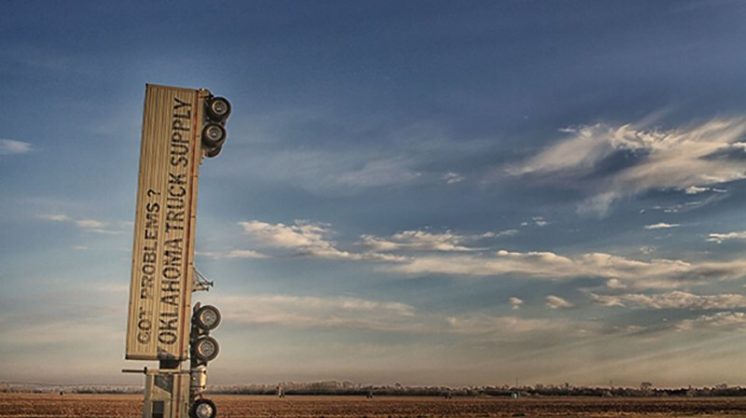 If There Was A Roadside Americana Hall Of Fame, The Vertical Vehicle Would Hold A Place Of Honor.

The most famous entry would be Cadillac Ranch, the row of 10 Caddies planted grills down, fins up in a field west of Amarillo. The most elaborate inductee might be Carhenge, the circle of upended cars painted a somber gray in a Nebraskan tribute to the ancient monument of Stonehenge. And the tallest entry would be from Oklahoma: the topsy-turvy truck of Tonkawa, a travelers’ totem on the Great Plains.

The nose-down semi is off I-35, the state’s main north-south artery, which slices dead through the center of Oklahoma on its 1,568-mile run from Lake Superior south to the Rio Grande. On an average day, 17,500 vehicles pass the site off Exit 211, south of Tonkawa. More than 6 million each year. Hundreds of thousands of them are long-haul truckers.

Clint Wilkins used to be one of them. In 1987, after nearly 25 years on the road, he and his son set up a truck parts and repair shop off the interstate. To promote the venture, they bought space on billboards, facing north and south. Cost: $22,000 a year.

But before long, they had a better idea. Why not make their own sign? Wilkins has worked by the motto: “You got to be different. That’s what Elvis Presley said.”

So he took an eight-ton ’72 Kenworth and rented a crane to dangle it upside down. He anchored the truck’s hood in 11 feet of concrete, running three 20-inch pipes, each 40 feet long, up through the cab and the length of the rig. The pipes were welded to a 2-inch plate, which was bolted to the concrete bed set deep into the Oklahoma clay.

The lettering on the side, once a bright red, declares: GOT PROBLEMS? OKLAHOMA TRUCK SUPPLY. The top of the trailer reads WE FIX TRUCKS. Total cost for the materials and installation: $8,000.

The five-story-tall rig – which has now spent far more time in the ground than it did on the road – stands solid in the open field north of the shop. For 10,000 dawns, the truck has served as a giant sundial, its shadow extending long across the lanes of traffic to the west, contracting as the sun climbs, and then reaching to the eastern horizon as the sun sets. Its fading lettering takes care of business, posing its existential question to travelers speeding across the prairie.

A tornado has come within a mile of the site, which has been battered by straight-line winds that crumpled road signs on the interstate.

“Two or three years ago, there were winds over 100 miles per hour. They blew in the doors of the shop, peeled back the eaves from the roof, sandblasted vehicles in the parking,” Brett said. In the end, the truck was still standing, undamaged, trailer end jutted 50 feet into the sky. And there it remains.

In the modern storm of self-promoting retweets and hashtags and inflatable apes, the GOT PROBLEMS? truck enjoys its own kind of viral popularity with postcards, photo ops and salutes from the experts. The Wilkinses and their installation are featured on page 345 of the 700-page college textbook Effective Small Business Management, and on page 440 of the even-longer classroom textbook Basic Marketing: A Marketing Strategy Planning Approach. The New York-based Inc. magazine featured the idea as one of its top buzz-worthy examples of small-business savvy.

The business has grown into a truckers’ toy store, hosting an annual Busted Knuckle Truck Show in September and offering chrome accessories, diesel maintenance and repair, a tow truck and expert advice.  “It’s the best marketing we could’ve done,” Brett Wilkins said. “Even when we’re out of state, when people ask where our shop is, we say we’re in Oklahoma on 35, the place with the truck, and they say, ‘I know where you’re at!’”