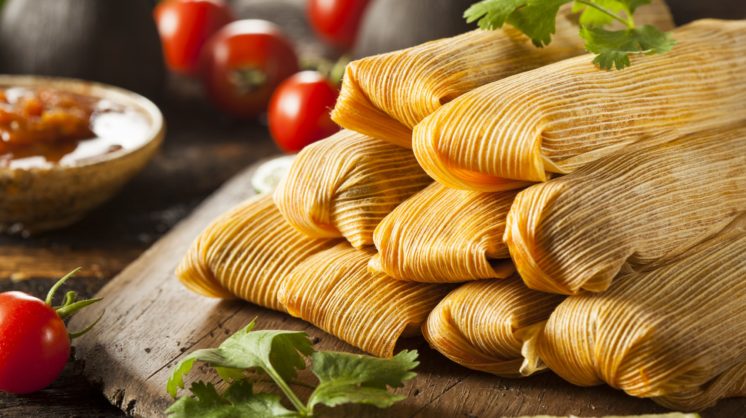 Thanksgiving food traditions run the spectrum from delicious to odd to inedible—looking at you, jell-o “salad.” Family traditions dominate the look of the table, but cultural traditions also influence choices. Something as simple as which region of the country you’re in, or from, can dictate the menu. Recently, we learned about “corn casserole,” a dish allegedly from Oklahoma that contains “Mexicorn,” rice, cheese, and cream of celery soup.

Many of the old-school dishes that started appearing on tables in the 1970s came from recipes on Campbell’s soup cans, but even older traditions still hold sway, like oysters in stuffing from the West Coast, or chestnuts in the northeast. Because of those soup cans, cream soups show up a little too often, adding additional unneeded sodium to a table already bursting with it. On the other hand, celebration food isn’t supposed to be healthy.

In Lebanese families, hashwa lands on the table right next to cornbread stuffing. The traditional dish features seasoned rice, ground beef, cinnamon and other baking spices, and toasted nuts (usually as a topper).

Mexican families have long used tamales and enchiladas as celebration foods. This year, though, Felix Cornejo, owner of Tamale King, is creating a mashup by making pumpkin tamales. “They’ll have a touch of sweetness,” Cornejo said, “but we’re also adding a dulce version with coconut, raisin, and pineapple.” Tamale King recently moved into a shared space with Cellar Cafe on Classen, and Cornejo said it will be taking orders early this week for the new tamales, as well as the traditional chicken-cheese-jalape​​ño, spicy pork, bean and jalapeño, and quesabirria. Cornejo uses the consomme from the birria in the masa, making for an outstanding tamale.

Other Mexican traditions include recalentado, a chile colorado featuring the leftover turkey from the Thanksgiving table. Carlos Alvarado of Jones Assembly said his family shreds the turkey the next day and then adds it to red sauce. “It’s better than the turkey on Thanksgiving Day,” he said. Chris Castro has given us a basic chile colorado recipe (below) if you want to give it a try.

Chef Kevin Lee, owner of Birdies Fried Chicken (opening 2022), said Korean-American families include songpyeong on the table, a rice cake associated with the Korean Harvest Festival. They are sweet, chewy, and a bit nutty, and in some families, the cakes are steamed with pine to create even more flavor.

Vietnamese families draw one Chinese cuisine for their Thanksgiving meal, with Peking duck or roasted pork—Chinese style, with crispy skin. Chef Julie Nguyen said families usually purchase it right before the holiday at a Chinese barbecue stand, like the one at Chinatown grocery on Classen.

Take anchos and guajillos, and use scissors to cut the stems off and remove the seeds.

Cover the chiles with 3 cups of boiling beef broth and allow them to steam, covered, for about 30 minutes. They should have plumped a bit and be tender.

Carefully (in batches if needed) add the chiles and the broth to a blender and purée until smooth, then set aside.

Add turkey to a large, heavy pot. Chop up garlic cloves and throw them in the pot with bay leaves, ground cumin (if you have whole cumin, toast it first and then grind it), and some fresh chopped sage and Mexican oregano (smash it up between your fingers before adding).

Give that a stir until it becomes fragrant—about 1 minute or so. Add remaining beef broth and let it simmer uncovered for an hour. Stir in your chile purée and simmer for another hour. The sauce should be very thick and a deep dark red. Add salt and pepper to taste.