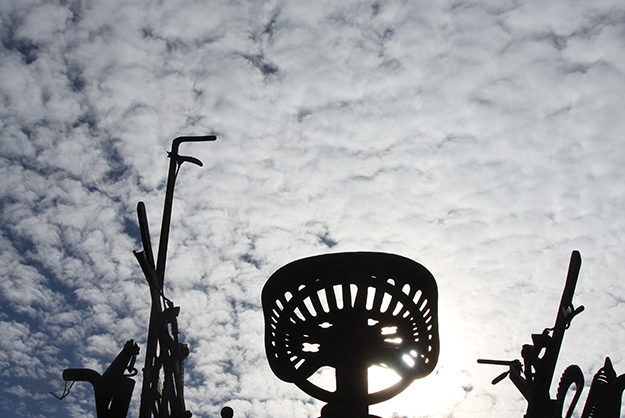 The iron Ore Was Wrenched From The Deep Mines Near Lake Superior, forged in the furnaces of steel mills of the northeast and shipped to the factories of the midwest. There, it was hammered into devices that remade the future of the frontier, fortifying the wagons that crossed the Plains and the plows that broke the soil. The steel encased the tireless heart of machines that sowed seeds, cut stalks, stripped cotton and harvested the amber waves of grain that transformed the Western Oklahoma prairie into the nation’s breadbasket.

But strength alone was not enough to avoid obsolescence. The population was shifting, and the scale of farming changed.

In the early days of statehood, half of Oklahomans lived on farms. By 1950, only one-quarter did. From the Great Depression to the end of World War II, larger operations bought up smaller spreads.

Beginning in 1954, there were more tractors on American farms than working stock. Early models were sidelined by contraptions that were bigger and badder. The steam-powered machines that had outmuscled oxen and mules and horses were themselves replaced by newer technology, driven by internal combustion engines.

One by one, the once-coveted pieces of older equipment were parked out by the barn. Stored in a shed. Left in the field.

Seasons turned to years, and years to decades.

The Great Plains crept up and claimed the relics that had altered its history: prairie schooner ribs, steel-wheeled tractors, toothy hay rakes and combines, sun-baked gears.

The steel that broke the land is now part of the prairie. Decaying machines linger, half-swallowed by tall grass, propped outside small-town museums, slumped by a sagging fence line, sheltered under a lone tree in the middle of a pasture.

Bronzed by dust and rust, their silhouettes slumber on Oklahoma’s long low horizon, at rest in their own fields of dreams.

Editor’s Note: This is the 18th installment in a continuing series as author and photographer M.J. Alexander chronicles her travels across the state of Oklahoma.