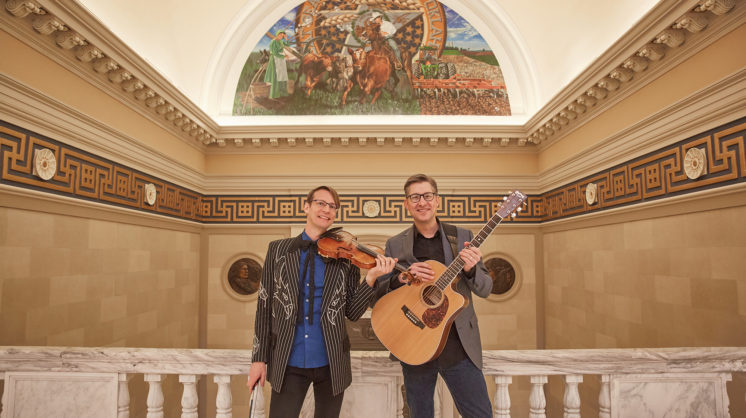 Throughout our lives, friends come and go. Some simply pass through, while others remain profoundly rooted and stay for the long haul. Kyle Dillingham and Peter Markes are two Oklahomans whose lasting friendship is solidified through their music. The two grew up in Enid, Oklahoma, and attended Enid public schools, but it would not be until the two high schoolers attended the Oklahoma Arts Institute at Quartz Mountain one summer that they realized music was their unwavering bond.

Both are accomplished fiddle and guitar players who play two very different musical styles, shaped by even more diversified musical influences. Markes found inspiration through James Taylor; Dillingham through Bob Wills. Their musical styles range from classical, to country, to folk, to an Eastern European Romani vibe, and everything in between.

Needless to say, their music is eclectic and not identified by any one genre. Together, they have performed in over 25 countries, sharing their message that music is designed to inspire, encourage, and heal. Music is a tool of unification, and they are working to bring together a world.

In 2019, the two made their debut at the Grand Ole Opry; a crowning achievement for both. Dillingham, a fiery and energetic performer, made history with that Grand Ole Opry performance when he became the first musician to ride a skateboard on stage while playing the fiddle. It would become a staple for future shows.

In 2014, Markes was presented Oklahoma’s Teacher of the Year Award. When he is not performing, Markes is a Professor of Music at Oklahoma City University. “OCU is lucky to have Peter,” said Dillingham. “There is not another classroom in the country that is getting the same benefits that they are getting from Peter and his experiences.”

Dillingham has shared the stage with such names as Charlie Daniels, Vince Gill, and The Oak Ridge Boys. He has also performed for the King of Malaysia and the Princess of Thailand. With performances in over 40 countries, he has received the title of “Oklahoma’s Musical Ambassador.”

Expo 2020 Dubai is the first World’s Fair to be held in the Middle East. More than 190 countries are being hosted across the six-month event, and attendees can experience everything from themed events to arts and crafts, poetry, educational programs, food, and live music. More than 200 performers will represent the United States, including Step Afrika!, Rocky Mountain Ballet Theatre, and the Harlem Globetrotters.