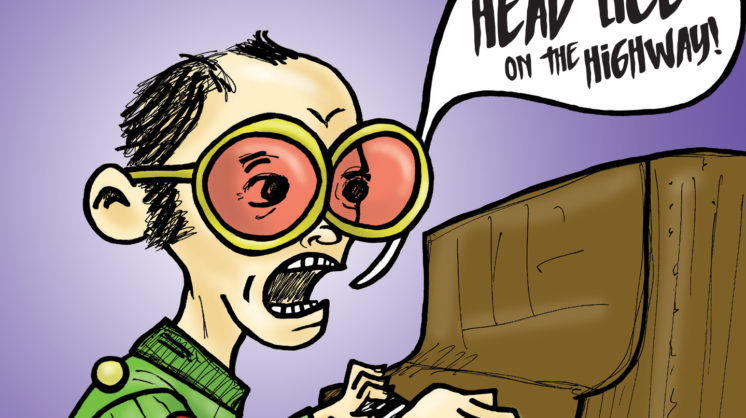 Poor Mr. Roth – something is missing from his Valentine’s Day DNA. He seems totally lacking in nostalgia for homemade Valentine’s boxes and homeroom parties, or affection for conversation hearts and frosted sugar cookies, red glitter and roses bought from the back of a kidnapper-style van at May and Britton.

I’ve spent the last several weeks lying in wait for Feb. 14, just to convince my husband that the only real flaw with Valentine’s Day is that it’s not a paid day off. Maybe all he needs to embrace the occasion is a properly worded love note – inspired, perhaps, by the words of a love song.

Over the past few weeks, I’ve embarked on a saccharine-drenched experiment: I’ve spent more time than any human should listening to Sirius/XM’s Love channel, the musical intersection of Maureen McGovern and Air Supply. Sure, I want to vomit cotton candy when I listen to it, but even the late, great Jim Croce had to say “I love you” in a song … plus, I’m committed to the cause.

Somewhere between “All Out of Love” and “My Heart Will Go On,” it occurred to me that, no matter the genre, I often have no idea what the song is actually saying, yet I stick to the mistaken lyrics I’ve created in my head. It turns out that there’s actually a name for misheard words and phrases: mondegreen.

The term comes from American author Sylvia Wright’s admission of a childhood mishearing of classic English poetry – it was years before she learned that “They hae slain the Earl Amurray and Lady Mondegreen” actually said “and laid him on the green,” not quite the romantic tragedy she had envisioned. Anyway, it’s always nice to put a name to something you’re doing wrong.

Ever singing from my own songbook, I’ve blithely endured my mondegreenery for years. I thought Queen was singing, “kicking your cat all over the place,” but it was only a can. It was breaking news to me that in “Come Monday,” Jimmy Buffett sings, “California has worn me quite thin. I just can’t wait to see you again.” My version was, “California is one big, white pan…” Maybe Cali is hot like a frying pan. A white one.

In the past 24 hours, I’ve also discovered that I’ve been singing the wrong words to “We Are Family” by Sister Sledge. The lyric goes, “Just let me state for the record, we’re givin’ love in a family dose” – not my version: “just let me speak for Rebecca.” I thought Rebecca must be one of the Sisters who wasn’t invited to the recording session, or she would have spoken for herself.

I never questioned the Starland Vocal Band when they sang (I thought) “rubbin’ sticks and stones together make a sparstic night.” What does sparstic even mean? Who cares? It really works there. (The real lyrics: “makes the sparks ignite.”)

Why do Brits make English so hard to understand, anyway? I’ve had to re-lyric a lot of Elton John songs. I knew that “Bennie” from “Bennie and the Jets” had electric boots, not electric boobs, but I didn’t realize she had a mohair suit. I’d put her in a Mohawk suit, given the option. I’ve also crooned about counting the “head lice on the highway” in “Tiny Dancer.”

With Valentine’s Day hanging in the balance, I’m listening to songs more closely to find the right sentiment to win over Mr. Roth. It may come down to “just remember Isle of View, and it’ll be all right.”