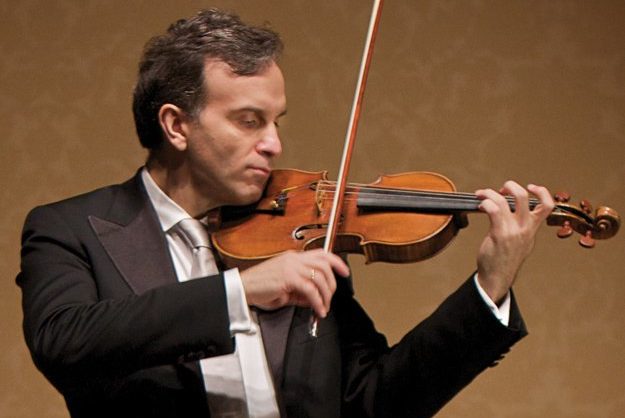 Eddie Walker joined the then-fledgling OKC Philharmonic as an intern in 1989 and has since risen to the lofty title of Executive Director, amassing an impressive store of knowledge and expertise and witnessing more than a few performances along the way. So when he says, “This seems to be one of those seasons where all the stars kind of lined up,” music lovers across the metro should take notice.

The organization’s bar is already set fairly high – “We do pretty well at this in general,” Walker admits – but even from that insider’s perspective there’s something about the 2012-’13 slate of eight Classics Series and six Pops Series performances that he thinks stands out. “This seems to be a season that has broader and bigger appeal than most. It’s just that combination of the right artists, and the repertoire that Joel [Levine] has built around them, it just seems to really be appealing this year – more appealing than usual.”

How so, you ask? Check out this lineup…

Members of the Philharmonic administration chose individual artists or performances from this season that they’re especially anticipating, but the man wielding the baton could not.

Maestro Joel Levine: “That’s an impossible question. It’s like asking a heart surgeon, ‘Which is your favorite person you’ve saved?’ I don’t program concerts that I don’t enjoy conducting – a lot – otherwise there’s no sense in doing it. For this particular season coming up, I would not be able to pull out one. It’s loaded with pieces that we as musicians just worship, so it’s going to be challenging and rewarding.”

Conrad Tao is an award-winning pianist; and an award-winning violinist; and he’s won the ASCAP Morton Gould Young Composer Award for the last eight consecutive years. Oh, and he just turned 18. No wonder Forbes put him on its last 30 Under 30 list highlighting the youngest stars in the music business – in fact, he’s the only classical musician on that list. In OKC, Tao will be performing Liszt’s “Totentanz” and “Variations on a Nursery Theme” by Dohnanyi, while the orchestra tackles Elgar’s “Enigma Variations” and “Autumn” from Glazunov’s “The Seasons.”

Eddie Walker: “We have been trying to bring him back for 20 years, and it’s finally lined up.”

In constant demand worldwide – his 2012 itinerary includes Hong Kong, San Francisco, London and Carnegie Hall – for his impeccably skillful technique and unmistakable warmth, the Israeli-American Grammy winner makes a triumphant return to the Civic Center after two decades’ absence to perform the Brahms Violin Concerto in D major, accompanied by Glinka’s ”Kamarinskya,” “Four Sea Interludes” from Britten’s Peter Grimes and the “Dances of Galanta” by Kodaly.

Polished, powerful performances have garnered Douglas a gold medal at the Tchaikovsky International Piano Competition in Moscow, the rank of Officer of the Order of the British Empire for services to music – and acclaim from Bangkok to Belgrade to his home Belfast and all points between. He directs an orchestra, Camerata Ireland, at home, but will gladly operate under Maestro Levine’s baton in sharing Saint-Saens’ Piano Concerto No. 2 in G minor with OKC alongside violist Royce McLarry, who solos in Berlioz’s “Harold In Italy,” and the orchestra’s rendition of Saint-Saens’ ”Danse Macabre.”

Public Relations Director Michelle Winters: “I’m excited to hear Stefan Jackiw. He’s brilliant, and since I’m a violinist, it’s always a treat to hear someone I admire so much perform one of the giant masterpieces of the literature.”

The masterpiece in question is Beethoven’s Violin Concerto in D major; the brilliance courtesy of the astoundingly gifted Jackiw, who has been considered among the upper echelon of artistry in his generation (he’s a mere 27) since Keith Lockhart invited him to play with the Boston Pops at the tender age of 12. That performance will follow the other of the evening’s title visions, Dvorak’s alternately cheerful and tempestuous Symphony No. 8 in G major.

Public Relations Coordinator Chris Stinchcomb: “The February 2 performance is very exciting for me. It isn’t often you get to hear Higdon’s Percussion Concerto performed, especially in your home town with your amazing home orchestra – that’s thrilling.”

A core-shaking experience like a live orchestral performance of Copland’s ”Fanfare for the Common Man” isn’t something a lot of musicians would lightly choose to follow, but Currie’s magnetic charisma and blazing speed at navigating among a dizzying array of instruments are more than sufficient to captivate fortunate audiences. Higdon’s Percussion Concerto would quickly overwhelm most humans who attempt it; for Currie it’s a chance to show off before the orchestra finishes with excerpts from Swan Lake.

After the overture to the Verdi opera that gives the evening’s performance slate its name, the Juilliard-educated Bailey takes center stage to demonstrate his instrument’s potential and prowess as a solo star, delivering a richly sonorous rendition of Haydn’s Cello Concerto in C major with the lush voice and consummate skill that are his hallmarks. The Philharmonic will then close the show with Brahms’ long-gestating Symphony No. 1.

Eddie Walker: “Big star; first time we’ve ever had her. I’m a pianist, and I love Rachmaninoff – Rachmaninoff may actually be my favorite composer. I do like the Stravinsky too. And Joel does that really well.”

Kern plans to enchant her OKC audience with Rachmaninoff’s Piano Concerto No. 2 in C minor – she likely has a special fondness for the great Russian, considering that she walked away from the first of his namesake competitions with a gold medal at the age of 17, and later played another of his concerti to take home an even more prestigious gold from the Van Cliburn International Piano Competition. The spell concludes with the 1947 revision of Stravinsky’s transcendent ballet Petrouchka.

Season Finale Orchestral Showcase: A Globetrotter’s Guide to the Orchestra
May 11

Maestro Joel Levine: “I try to make it audience favorites and works to show off the orchestra – as a whole and as sections. It’s like having a sports car; sometimes you want to take it out on the road and open it up.”

With no guest star to command the spotlight, the focus is on the world-encircling lineup chosen by Maestro Levine to put a triumphant coda on the season: the overture to Wagner’s The Flying Dutchman, “Adagio for Strings” by Barber, Tchaikovsky’s ”Capriccio Italien,” the propulsive, voodoo-inspired “Ogoun Badagris” by Rouse and Richard Strauss’ Der Rosenkavalier suite. And… curtain.

Music is a lifelong joy – why wouldn’t you want kids to start experiencing it early?

The Philharmonic’s Discovery Series helps introduce children ages 4-13 to the wonders of the symphony through hour-long family concerts accompanied by educational and entertaining activities: October 28 is “Phil’s Monster Mash,” featuring Halloween-themed music and costumes; January 27 is a patriotic musical adventure called “America The Beautiful”; and the orchestra rocks out April 7 with assistance from special guests The Sugar Free Allstars. Little listeners can also join the Chill-Harmonic Kids’ Club for special benefits including a club t-shirt and newsletter. Call 232.7575 for details.

“I think this season is one of our best.” – Eddie Walker

The Pops season presents opportunities for the orchestra to explore vastly different musical styles and team up with unforgettable guests to delight fans of different genres, but despite the name of the Cole Porter tribute it’s not simply “anything goes” – a great deal of thought and research has gone into this programming. “I’ve seen all of these shows in person,” explains Walker, “so I know exactly what they are; so that when I say in print or in person, ‘You’re going to love this show,’ I can say that having seen it.” Which show is audience going to love this year? “Well… I think they’re going to love ’em all.”

And soul mornings, and funky afternoons, and… basically any time during the ’70s when there was music that makes today’s audience want to shake a hip or lip-sync along, it’s there. Polyester? Yes. Sequins? You betcha. This show has a mirror ball and isn’t afraid to use it, while delivering joyous music from ABBA to “YMCA” under the direction of Jack Everly.

The Music of Michael Jackson
January 25-26

Eddie Walker: “Thirty minutes into the show, everybody in the hall was just… smiling. The joy of the music was in the room and everyone was just having a great time. It’s fun; it’s surprising, it’s a great evening of entertainment.”

Walker foresees this show as one of the season’s surprises, because although Jackson is still a household name and very much in the public mind, “you still forget how much great music he’s been a part of. And in the end, it’s the music that wins you over.” Especially when that music – from the Jackson 5 era to the global domination of “Thriller” and beyond – is being performed by the electrifying James Delisco and friends.

Cole Porter was a music machine, penning both the tunes and lyrics to hundreds and hundreds of songs – more than enough to fuel a special evening of all-time classics like “You’re the Top,” “Night and Day,” “Begin the Beguine” and “I Get a Kick Out of You” as Joel Levine, the Philharmonic and an array of special guests revel in Porter’s gifted wit and charm.

Sound good? Tickets for individual concerts go on sale September 4, and Flex 4-packs let you choose a quartet of concerts, but the last thing you want is to miss out on a sold-out show – season tickets guarantee you a seat at each performance.

The Philharmonic also offers a limited number of student tickets to every show, Pops and Classics, that are $5 each – but only one per person, only with a valid, current college or high school ID and only 30 minutes before show time.

PR Coordinator Chris Stinchcomb explains, “It’s a great way for high school and college students to not only experience an orchestra for possibly the first time, but also to get in music or art credits for school. We’ve even had high school kids come on dates. It was pretty endearing.”