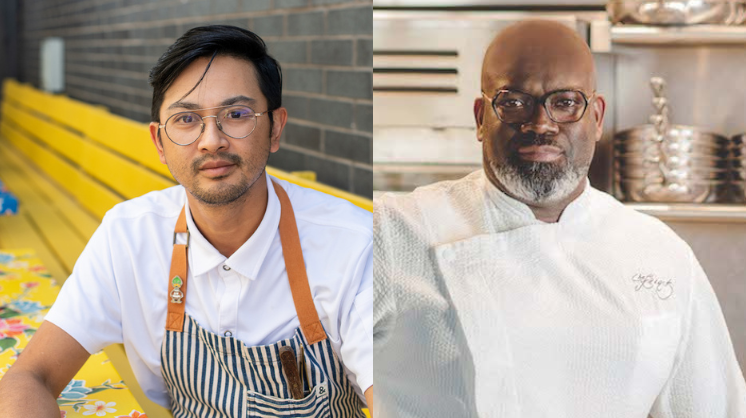 Chanchaleune said, “It feels really great to get another semifinalist nomination, and this time for Ma Der. It’s validation that what we’re doing is making an impact, and to be recognized for it makes me and all of us at Ma Der very proud. I hope that we can go a round further this year and maybe bring it home to the 405.”

Ma Der has been riding high the past several months after receiving national acclaim in The New York Times and Bon Appetit magazine, with both naming the Lao cuisine concept among their 50 best in the U.S. The James Beard Award nomination is the third crown in Chanchaleune’s culinary trifecta. The restaurant serves Chanchaleune’s modern take on traditional Lao cooking, much of which he learned from his parents and grandmother.

Dansereau said she was genuinely shocked at the nomination. “I knew I had the best bartenders in the country, but this was a huge surprise,” she said. The bar program at Frida is a well-rounded, forward-thinking project that includes beer, wine and cocktails. She has consistently built one of the best by-the-glass wine lists in OKC, and Zac Speegle’s creativity behind the bar seems to know no limits. Another thing that sets Frida apart is that the bar program isn’t just popular with critics; the public loves it, too. Dansereau’s team has managed to make serious cocktails that lean toward consumer-friendly without dumbing anything down.

Chef Black was named a semifinalist for Most Outstanding Chef in 2022, so back-to-back nods have him reeling a bit. “I’m still taking it in,” he said. “We’ve been through so much at Grey Sweater, and we’re still trying to find ways to push ourselves, to improve, and to do all of that without compromising or cutting corners. This city has loved me and supported me for 16 years, and this nomination is for the city, too, because OKC has had our backs this whole time. I love this city. I’m very happy for Chef Jeff and Frida, too. It’s important that the message gets out that OKC is moving forward.”

The James Beard Foundation Awards process now enters into the judgment phase, wherein judges from all parts of the country visit the nominees’ concepts to make final decisions. The finalists will be announced March 29 and winners awarded on June 5 in Chicago.