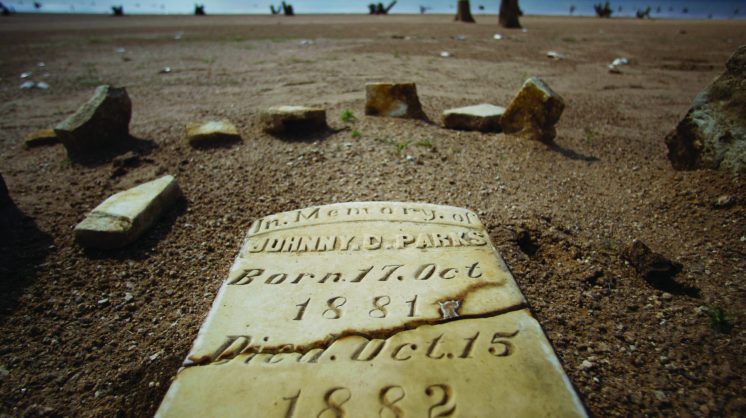 In this Oct. 5, 2011 photo, a child's grave site, normally at least 20 to 30 feet underwater, has joined other remnants of old Bluffton, Texas, resurfacing on the now dry, sandy lake near Bluffton, as the Texas drought shrinks the state's largest inland lake.

The photo from a 1939 issue of The Oklahoman showed a pavilion in front of a John Taylor Dry Goods store in Woodville, Oklahoma – a town that, at the time, was situated on the north side of the Red River. A sign in front of the pavilion told passersby that there would be “no loitering” at that location.

Five years later, loitering was no longer a problem at the dry goods store, which was, by that time, extremely wet.

The process of building Lake Texoma started in the mid-1920s when a Denison, Texas, businessman named George Moulton decided it would be a great idea to build a dam at Baer’s Ferry on the Red River. He met with the chambers of commerce in Durant and Denison about the idea and enlisted future Speaker of the House Sam Rayburn to back a plan for an expansive lake stretching over the Oklahoma-Texas border.

In 1944, just six years after the Rayburn-sponsored Flood Control Act of 1938 authorized construction of the Denison Dam, the area started filling with water. Woodville and three nearby Texas towns – Preston, Hagerman and Cedar Mills – slept with the fishes.

Until the construction of Lake Eufaula, Texoma was the largest lake in Oklahoma, and its construction required many changes to the infrastructure that had been accruing in the area since the days when Holland Coffee and Silas Cheek Colville established a trading post in 1836 at what would become Preston. Railroads, cemeteries, public utilities and highways had to be diverted or relocated completely.

As the Flood Control Act of 1938 suggested, the area was extremely prone to flooding of the unregulated Red River, but under normal conditions, school children from Preston were able to wade across the river to the Woodville Community School. The narrowed point of the river, where Woodville and Preston faced one another, was also used for the Butterfield Stage Line and as a crossing point for the Shawnee Cattle Trail.

Once the area was flooded permanently by Lake Texoma, the former site of Woodville became a prime fishing area for people looking to hook a largemouth bass. Like sunken ships, the towns became freshwater reefs for the lake’s schools of fish. Some residents of Woodville relocated to a town called New Woodville, which was home to 132 people in the 2010 census.

In 2011, when Oklahoma and Texas experienced record high temperatures and record low rains, the old Woodville attempted a comeback as lake levels plummeted. Headstones from the Woodville Cemetery were visible along the shore, as were other structures that had long since been buried under decades of silt. A decade later, the area is still a favorite among fishing enthusiasts and adventurous scuba divers.