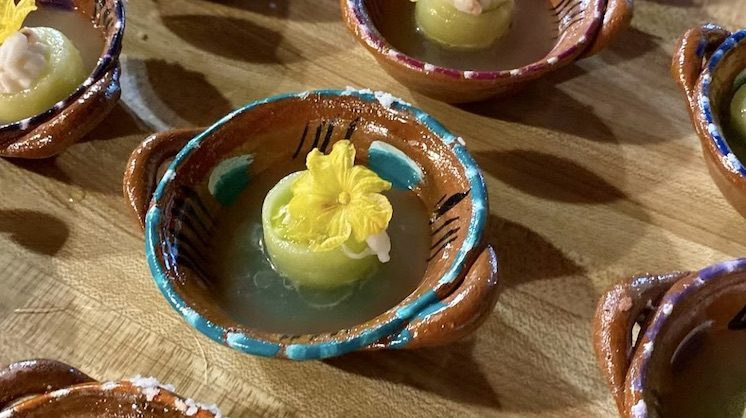 Chef Jessie Gomez is taking his Underground Ghost Kitchen public October 8. The pop-up and event-based concept has made appearances around the 405 since its debut on Labor Day weekend in 2018. A mentee of Chef Joel Wingate at Cafe 501 and Sparrow, Gomez grew up in Edmond, where he learned to cook in his mom’s kitchen.

Gomez remembers seeing a video of a Michelin-starred chef who started doing pop-ups to get his food in front of people.

“I decided to do a pop-up dinner at my house in 2018, and I invited friends,” Gomez said. “I did a three-course meal in my tiny kitchen and got feedback from everyone.”

What is immediately obvious when tasting Gomez’s food is that as young as he is, he’s already surpassed peers twice his age and experience. He has a natural ability and solid aesthetic sense buttressed by hard work and a commitment to continuing education. While at Cafe 501 Classen Curve, Gomez was looking for other opportunities to increase his knowledge and experience when he found an ad for a stage (unpaid internships common in food service) opportunity in Chicago.

“I did a one-day stage at Roister in Chicago, and it went well, so at the end of the day, they offered me a chef de partie role,” Gomez said. “It was unlike anything I was used to. Some days were 18 hours, where all I did was work through a prep list, and other times I was working over an open flame in a fire pit. We did 250 to 300 covers every day. It was incredibly demanding.”

Roister is a concept from Grant Achatz, a chef with multiple accolades from 50 Best Restaurants to James Beard Awards and Michelin Stars. Gomez spent several months in Chicago before returning to the Holloway Group in Edmond. He’s now the executive chef at Sparrow, and Underground Ghost Kitchen is a side project that he runs with the help of Roger Herrera, who handles front of house and production design, and director of operations Dylan Adams.

“We’re not just a pop-up concept,” Herrera said. “We go for large-scale production: music, art, intricate tablescapes, lighting — it’s an experience. We’ve had several events already, and we’re gearing up for when we have our own space.”

UGK has focused on regional Mexican cuisine so far, including an appearance recently at Oklahoma Contemporary, where Gomez and Wingate (he often helps out) prepared food from Jalisco for a cooperative of Guadalajara artists whose works are now on display at the gallery. The meal included birria de pescado, a dish that Gomez created based on his love for birria de res (beef) and birria de chivo (goat), two very traditional dishes in northern Mexico. Herrera said the focus will be changing beginning with an Oct. 30 event that is already sold out.

“Jessie can cook anything, and we want to showcase his talents with a more global cooking emphasis,” Herrera said. “We’re not tied down to any one menu or style. The goal is to take delicious flavors from everywhere and see what the chef can come up with.”

UGK has an upcoming Mexican pop-up at Lively Beerworks Oct. 8, the last chance for a while to have Gomez’s regional Mexican dishes — although they are planning a Christmas pop-up with tamales and champurrado. The Lively event will be from 4:30 p.m. to sellout and will feature birria de pescado, birria de res and a few other specialty items.