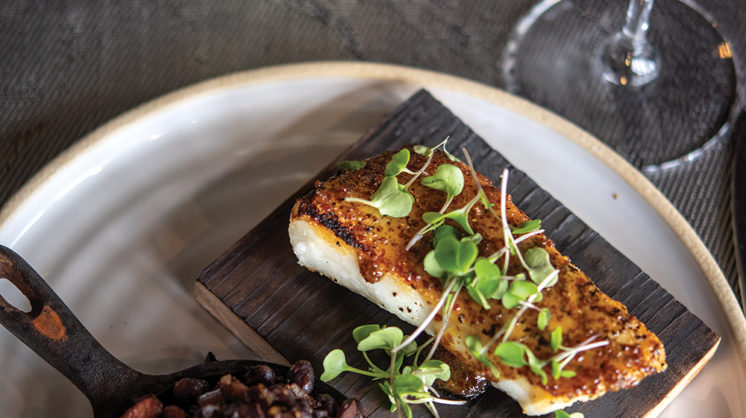 Sometimes, despite the best of intentions and dedicated efforts, ideas don’t pan out. Trying a different tack isn’t a knock on what went before, and change isn’t always a bad thing; a fresh approach can be a recipe for success. The restaurant at NW 63rd and May did an excellent steak when it was Meat Market Refectory, but that was basically all it did – so farewell, MMR, and say hello to Union Wood Fired Grill.

The decor isn’t very different thus far, but they’re aiming for a less formal atmosphere, starting with the menu, which was deliberately redesigned to move away from the steakhouse-specific iteration and be more universally accommodating to a variety of palates; it currently incorporates dishes that taste good. A selection of seafood, a dose of vegetarian-friendly dishes, an ample helping of great steaks (some things never go out of style) … bring them all together under the direction of star local chef Jonas Favela, and you have a pretty delicious, and appealing, union.

Favela is a well-traveled veteran of OKC’s dining scene, but while he’s been brought in to contribute his expertise to places such as The Ranch, Boulevard Steakhouse, Flint and the former MMR, he now has a genuine ownership in this space; Union’s concept and menu are his. 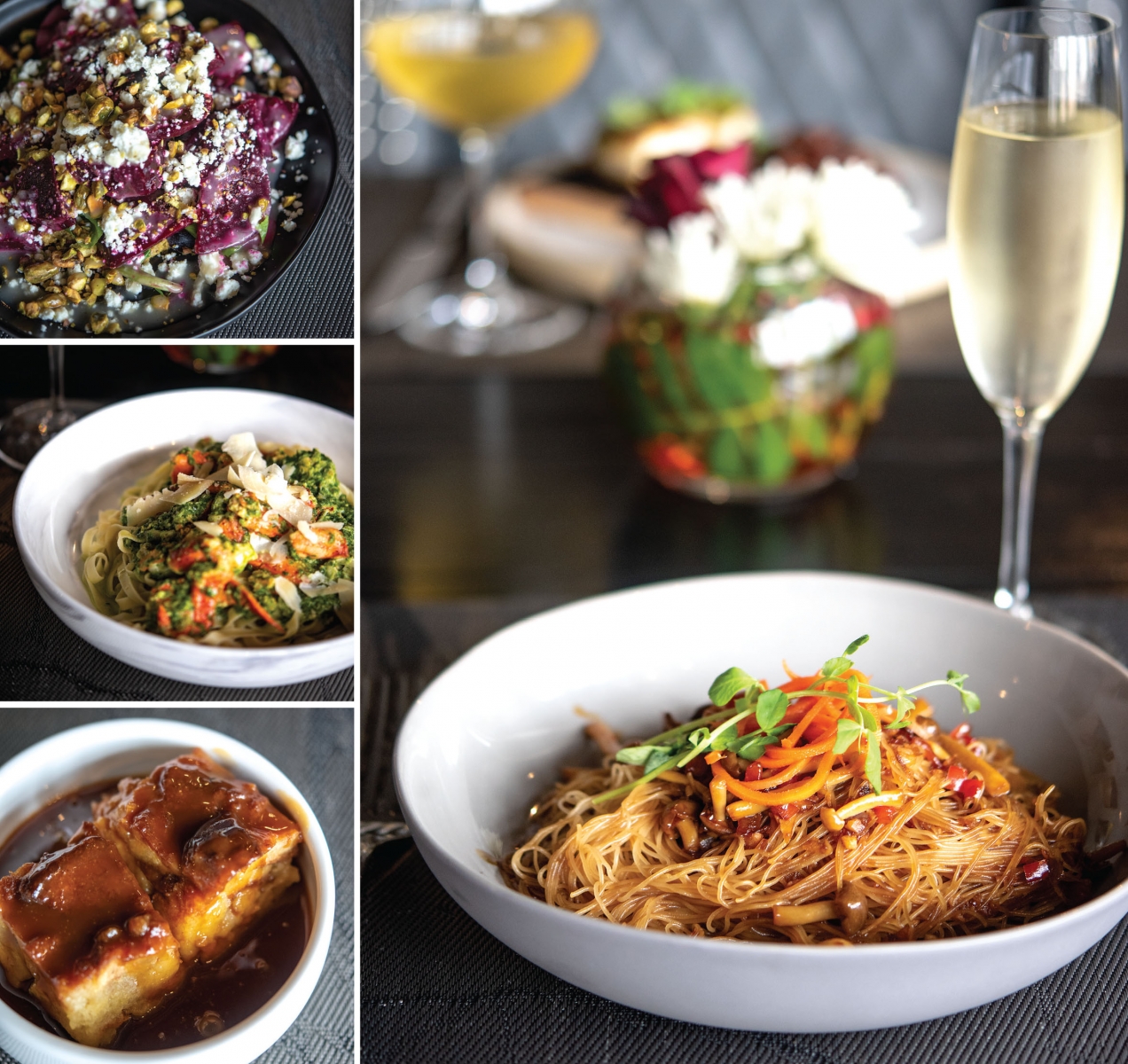 He acknowledges the menu’s range – “It’s like my style as a chef: It’s all over the place,” he says with a smile – but aside from taste and execution, there’s a strong throughline of heat, both via the namesake grill and doses of spice. “I’m Hispanic, and growing up I had a lot of Latin food influences. Now, I have a love for that food, so now I try to blend that Latin flavor with some of my cuisines – you wind up with something special on a plate.”

To get a good look (and taste) at how his deliberately eclectic approach pays off on the plate, order the beet and goat cheese salad. Seriously, get it; the bottom layer is pistachio butter, which should sound tempting enough to prompt an order all by itself. Big chunks of nicely cooked beets, just enough lettuce to make it feel like a salad as opposed to a vegetable platter, ample crumbles of goat cheese on top and a rich maple vinaigrette laced through everything – the individual flavors are all over the place, but I’m here to tell you that the whole is delicious.

A small but carefully considered section of the menu is dedicated to vegetarian options, because, as Favela says, “I really want to make vegan options full-flavored; I don’t want to give them three sides on a plate.” Consider the popular vermicelli bowl, in which rice noodles are studded with grilled shishito peppers, mushrooms, pickled carrots, onions and Japanese eggplants, and lacquered in a more-sweet-than-sour teriyaki sauce. 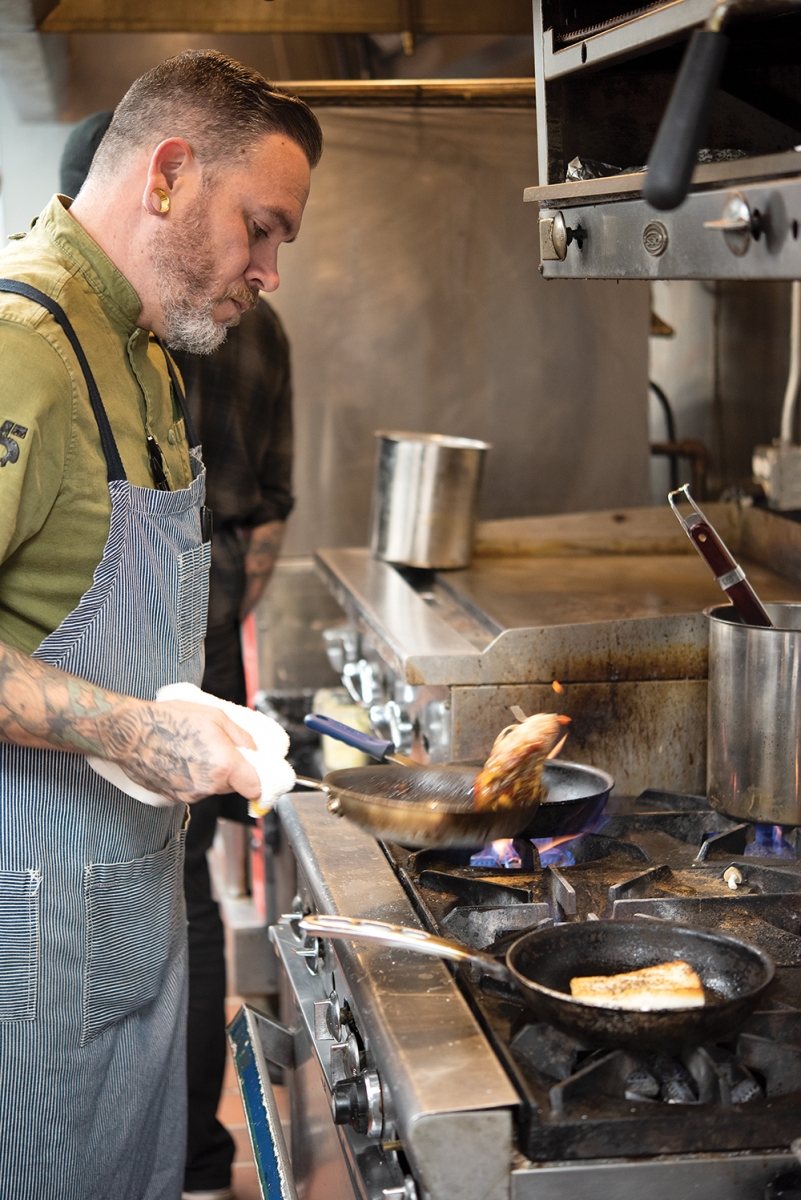 On the other hand, it’s easy to recommend the lobster tagliatelle, and not simply because it uses locally sourced (and exceptionally good) Della Terra pasta. Its fragrant, flavorful basil-chive pesto is marvelous even without the tender hunks of lobster. (Although, in general, we should take the opportunities life affords us to eat lobster.) With that said, if there’s one entrée on the menu you should try, I’d point you toward the Chilean sea bass, whose truffle-honey mustard glaze and preparation on a cedar plank add intriguing flavor notes to one of the best pieces of fish I’ve ever eaten in OKC. The accompanying black bean cassoulet with lardons is a find, too. Favela explained that he wanted to try using the cedar plank preparation with a different fish than salmon; his cheerful determination to “do something unusual” genuinely paid off in this creation.

The dessert menu isn’t particularly broad, but it’s thoroughly serious – and if the only entry were the brioche bread pudding, that would be plenty. From texture to taste to lack of raisins and inclusion of thick, sticky salted caramel sauce, it’s practically perfection. If the only complaint you can make about a dish is that it might be a little too big, I’d call that a success.
A similar sentiment applies to Union itself. Its new concept can’t be summed up in a single word, and the multitude of options might be interpreted as a lack of focus when compared to single-issue alternatives such as “French” or “steakhouse.” But bringing together choices is no bad thing. As Favela puts it, “I wanted to kind of open up the menu and offer something to everyone who might come in.”