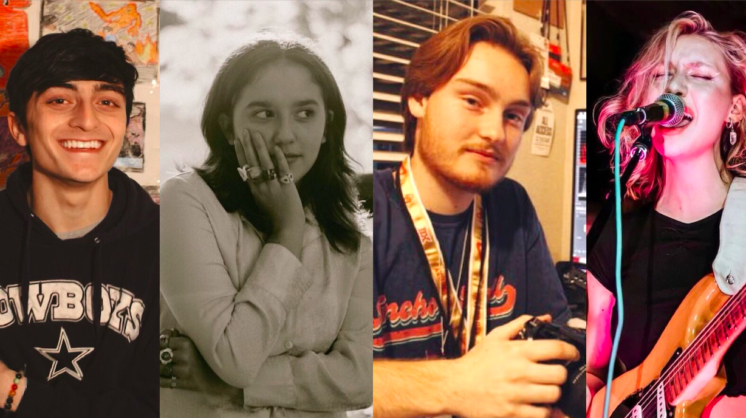 Up and Coming OKC is a new monthly series dedicated to showcasing a younger generation of creative genius. For a chance to see what inspiration lies at the heart of Oklahoma, take a look at the talent of our February edition.

For 19-year-old Mason Correa, the process of scriptwriting, storyboarding, and filming is no mystery. As a first-generation college student at the University of Oklahoma, Correa typically finds himself surrounded by inspiration to fuel his passion project: independent screenplay “Dominus.” At its inception, Correa took notes of impactful events in his life and turned it into a multi-dimensional world of fiction that tackles the struggles of coming-of-age characters with a superhero twist. Through hundreds of pages of rough drafts, rewrites, and sketches, Correa has spent the past two years crafting his four-season series. As most of the characters in “Dominus” reflect Correa’s close friends and personal experiences, he is able to transform the triumphs and struggles of teenage years into a fast-paced adventure following a multitude of heroes and villains.

“A lot of television shows seem to leave out core human elements when it comes to emotion, by making everything seem about love versus hatred,” said Correa. “Within ‘Dominus,’ I want to appeal to a wide audience. I think there’s a lack of representation for a genre that really appeals to both kids and adults, and while some heavy scenes in the media can be more difficult for younger people to digest, a connection can be formed by having the hero of a story combat real-life issues in a tangible way.”

“Dominus” aims to cover a multitude of themes surrounding willpower and compassion, while keeping its audience captivated by the odyssey of young characters who find the hero within themselves. Correa also handles creative direction regarding the show’s soundtrack, which includes a modern-day mix of rap music and hit songs that define current generations rather than reusing popular music in most media.

To accomplish writing and editing four entire seasons of content, Correa has an extensive creative process to back up his efforts. By taking the time to indulge in the simple moments of life, he can conjure entire universes of characters and narration. Beginning with an idea jotted down on a sticky note, Correa works on expanding his first thoughts until he is able to find the perfect ending to a chapter. Then come reams and binders of handwritten scripts, rewrites, storyboards, and printed screenplays.

“I typically focus on storyboarding if I need to see my concepts in a visual form,” said Correa. “Sometimes, I’ll film scenes for ‘Dominus’ that I end up editing and uploading online to get feedback. I want to do all that I can with this project so I can expand on its creative potential. The universe within ‘Dominus’ is such a sandbox that most have yet to play in, and I think that the themes of this story can empower people to be themselves while seeing that even heroes have to understand that it’s okay to not be okay.”

To see Correa’s work, visit @dominusdumps on Instagram and https://www.youtube.com/channel/Ucgvfj1ZKWsarOn__uzPmQGg.

Rocio Salvatierra, a 17-year-old Normanite, crafted a successful photography business from scratch after finding a way to turn her passion into reality. What once was a side-hustle quickly became her dazzling origin story as a professional photographer — from taking senior pictures for local high schoolers in Norman to snapping shots of businesses in the area, Salvatierra aims to capture the essence of each individual she photographs.

In a world of heavy editing, makeup, and other efforts to distort one’s natural image, Salvatierra refuses to alter the look of her clients. “My mission in photography is to make people feel good about themselves while capturing a unique moment in their lives,” said Salvatierra. “I like to capture people with all their one-of-a-kind features, and I don’t like to edit people’s bodies or faces.”

Her interest in photography began when she became accustomed to her father carrying a camera with him throughout her childhood. After becoming familiar with the world of images her father introduced to her, Salvatierra took control of her own creative production. She began taking classes to develop her talents behind the lens, ultimately allowing her to hone in on her craft and form her personal photography business.

Despite a vast array of clients, Salvatierra keeps her heart in Norman: “I tie this town into my photos by using picturesque and iconic locations. I’ve showcased the OU campus, downtown Norman,

and local parks and murals in a lot of my work.”

Salvatierra also takes creative leaps in her work, as she likes to incorporate abstract makeup, poses, and themes into her images. “I strive to capture a diverse representation of people,” she said. “With my photography, I want to make my clients feel as comfortable as possible in front of the camera by taking the time to find out more about them.”

To create harmony between individuals and outside inspiration, she works closely with her clients, leaving each one with photos to last a lifetime. “Before a shoot, my approach is to ask my clients questions before their sessions to make sure they’re the most comfortable on the day of, and that we honor what is individual about them,” said Salvatierra. “I like to collaborate with the people I photograph in making the decisions of where and how they want their photos taken. The editing process is something that I do myself, and I explore different styles, making room for a lot of diversity in the end result of my photos.”

Ken Pomeroy began her journey in the music industry at 9 years old before opening for Oklahoma’s Wanda Jackson at just 15. Her free-spirited nature and powerful lyrics separate her from the crowd of mainstream artists, and she has the content to prove it. With over 28 released songs on streaming platforms such as Spotify and Apple Music, Pomeroy is no stranger to making successful music. The aspiring star from Moore stepped into her most authentic self to tell stories through song rather than following the latest trends of popular musicians.

“To stand out in a world full of talent, I try to be honest in my songwriting — brutally,” said Pomeroy. “In the past two years, I’ve written songs I never thought I would have. I have let myself be vulnerable and allowed people to catch a glimpse of my emotions through songwriting, in hopes of my songs resonating with others.”

Pomeroy credits her introduction and brilliant upbringing in the music industry to her dad and stepmom, who helped her find gig opportunities, find a fashion sense, and develop her work ethic. Pomeroy’s parents have witnessed her musical journey as she aims to emulate Joni Mitchell with her folk and soft rock genre, but she plans on sticking with her folk Americana lyricism.

“I started pursuing music really young with the help of my parents well into my teenage years,” said Pomeroy. “I started playing smaller venues at around age 13, and then by 15 I had gotten so many amazing opportunities and started opening up for artists I adore. It was surreal. I, along with my parents, have worked so hard to get to where I am now.”

For her future in music, Pomeroy refuses to stop while she’s ahead, as her captivating talents steer her towards releasing projects currently in the works. With a vibrant spirit and old soul, Pomeroy is looking to leave her mark on Oklahoma and far beyond.

“I just had an acoustic album come out this past December, and my next single will be out soon,” she said. “It’s a step toward my growth as an artist and finding the sound that I feel most resonates with me. I want people to listen and think, ‘Yeah. This is Ken.’”

Ryan Jorgenson knows about the world of videography — enough to land him a job as the OU Football contact for social media, giving him the chance to work off the field with a plethora of five-star players and coaches. Jorgenson’s career took off at Sooner Vision, a program of the Gaylord College of Journalism and Mass Communications at the University of Oklahoma. As an incoming freshman with an eye for film, his talents were quickly recognized, and over the past two years of college, Jorgenson has already begun training incoming students to produce their own creative media.

His interest in videography came from his knack for vlogging as a child, as Jorgenson’s father always carried a flip camera to film for their online channel. It was sixth-grade history class in California when Jorgenson received his first feedback from a respected teacher. After letting videography lapse when his family moved to Texas, he decided to mess around with a camera again high school.

“My whole personality back then was that I was from California,” said Jorgenson. “Vlogging was really big there, and I wanted to try it out. My school district had an Adobe Suite, so I taught myself how to edit before joining my school’s broadcast program junior year.”

By dabbling with digital software and keeping his hands on a camera, Jorgenson excelled when coming to college. As there had never before been an official videographer for OU football at Sooner Vision, Jorgenson stepped up to the position and soon found himself on the sidelines with a camera in hand. He was even given the opportunity to fly to Baylor with the football team, staff, and coaches.

“It’s just surreal that I was able to experience that, since I’m an avid OU football fan,” said Jorgenson. “From standing in line next to Gabe Brkic and talking about the weather with him to getting on the team bus with a police escort all the way to the airport, I was able to see a different side of the players, one that humanized them into more than just athletes.”

Within his videos, Jorgenson looks for a story to tell rather than just a collection of plays. “For me, the best videos take it down to the basics to impact the way people feel. It’s all about the storylines of the football games, which can be difficult, because sometimes you’re just playing Kansas and no one cares. This year, I want to make my videos more cinematic while finding a balance between quick and longer forms of media.”

In the future, Jorgenson hopes to create his own production company and manage professional team’s brands. With his creative talent, it’s only a matter of time.