Up to the Challenge: OKC Triathletes’ Senior Wisdom - 405 Magazine 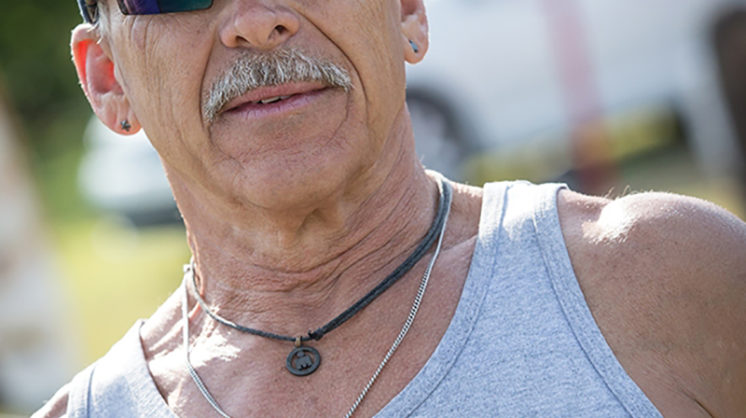 In Early 2000, Steve “Buzz” Bussjaeger Took His Nine-Year-Old Son To A 5K Race. Bussjaeger, A Self-Identified Sandlot Athlete Growing Up, Wanted To Encourage His Son To Pursue Outdoor Interests And Live A Healthy Lifestyle. His Son Took To The Races, And Eventually, Bussjaeger Ran A Race With Him.

“The little s— outran me,” Bussjaeger laughed. Losing to his young son became the impetus to make lifestyle changes of his own. “I joined the YMCA and finally quit smoking,” he said.

In truth, Bussjaeger, now 62 years old, was a pretty good athlete in college. A minor league baseball team offered him a shot at professional baseball, and he won the only bike race he entered in college. He said no to baseball, and after graduating from Pittsburgh State University with a degree in chemistry, Bussjaeger settled into his career.

The trajectory of life from play to sports to marriage, family and career is a familiar one to most people. Like our first rudimentary attempts at art – those pictures of houses and families adorning our refrigerators – our love for play and sports gets boxed up, literally and metaphorically, in our memories, photos, dusty trophies and reminiscences of what Bruce Springsteen sincerely and sarcastically called “glory days.”

Bussjaeger rediscovered that love for physical activity via triathlons. The Y membership turned into spin classes and regular workouts. As he was getting back into shape, he saw an ad for a triathlon at Oklahoma City Community College.

“I figured anyone could swim 500 yards,” Bussjaeger said. “I nearly drowned 50 yards in, and by the time I got to the 5K run, it felt like a death march.”

Although the picture he paints is grim, there are better ways to get involved in triathlons, and training makes it accessible to people of any age and body type. Stan Spears is a certified personal trainer, and he and Bussjaeger both help people prepare for triathlons.

Spears worked for FedEx for 34 years in various jobs, including the physical side of the business. “I remember joking before my retirement that I’d have to find something to do, or I’d turn into a fat, retired man,” Spears said. “I needed a retirement hobby to keep me in shape.”

What exactly that hobby would be Spears did not know at the time, but a chance conversation with his mailman would lead Spears to his first triathlon. The mailman was a triathlete; he invited Spears to come watch one. At the event, Spears discovered that triathletes came in all sizes and ages.

“Triathletes are not just categorized by age,” Spears said, “they are categorized by weight, too. The big guys are Clydesdales, and the big ladies are Athenas.”

Both Bussjaeger and Spears are in a category called grand masters, which means they are over 55. Masters are triathletes between 40 and 54 years of age. At many events, the divisions are further subdivided by age in five-year increments, meaning triathletes compete against their peers, both according to age and body type. The egalitarian nature of the system makes it accessible to all ages and sizes, and that, Spears said, is one of the best parts of participating.

Oklahoma gets more notice than is comfortable for some of our lifestyle choices. In 2013, we were ranked seventh in the nation in rate of obesity with nearly one third of adults qualifying as obese. Seventeen percent of children and teenagers (10 to 17 years old) are also obese. The numbers are familiar to Spears, and he said he is proud to be associated with a group that is trying to pursue a healthy lifestyle.

“These are dedicated, phenomenal people,” Spears said. “We have great fellowship, we commit to a healthy lifestyle, including healthy eating, and we spend time together for support and encouragement, both at competitive events and at social events.”

Many of the people Spears is speaking of are members of Tri-OKC, the Triathlon Club of Oklahoma City, which has 400 members. Bussjaeger estimates that about ten percent of the group are grand masters.

“Tri-OKC tries to promote the sport,” Bussjaeger said, “but we also provide advice and encouragement to all triathletes from beginners to elite athletes.”

The open-door policy for beginners makes joining easy, but Spears said the best way to get acquainted with triathlons is to do what he did: go as a spectator. Going as a volunteer is also an option.

“We love our volunteers,” Spears said. “They enjoy it, too. It’s very gratifying, because the triathletes are just so grateful to have them there. I even encourage triathletes to volunteer. There is much to learn by watching the elite athletes go by, including stride, seat position on the bike, breathing technique, all kinds of things.”

Tri-OKC has helped a few members turn pro, but the group does not exist as an incubator for grooming talent as much as it exists to support the members, promote the sport and provide opportunities to meet new people in a welcoming, social environment. As this is Oklahoma, one of the things the group does regularly is hang out at Lake Arcadia.

“Much of the training for triathlons is free,” Spears said. “For the swim training, we go to Lake Arcadia. After we finish practice, we usually have a cookout by the lake.”

“We don’t do much marketing, but we do host expos where we try to find people who are already interested in one of the sports,” Bussjaeger said. “We talk to them about multi-sport training. Most people don’t even think in terms of triathlons.”

The IRONMAN Triathlon is likely the sole reference point most people have for triathlon, and that isn’t necessarily a good thing. The IRONMAN is a 2.4-mile swim, 112-mile bike race and a full marathon combined. Even the official marketing for IRONMAN speaks of earning a “lifetime of bragging rights.” Presumably, they mean if you live, as the numbers alone are daunting, if not outright off-putting. Training for a marathon is grueling; running one is even more grueling. Imagine combining that with a swim and bike race.

Triathlons come in various sizes, though, and sprints are where most people start. A sprint is a quarter mile swim, 12.5-mile bike race, and 5K run. Those numbers sound like something more attainable for most. The next step up is the official Olympic triathlon: 1500-meter swim, 25-mile bike race and 10K run. The biggest race Tri-OKC sponsors is the “half iron,” which is comprised of exactly half the distances of the IRONMAN Triathlon.

Training for triathlons actually makes good sense for people who like to work out regularly, as triathlon training provides a few legitimate benefits. Bussjaeger said switching between the three sports prevents the burn out that occasionally happens to people who are runners or bikers only. Also, training around an injury is easier with multi-sport training. Finally, training in different seasons and weather conditions is easier with multi-sport.

Much of the difficulty of promoting triathlons comes from its absence in the most formative places for sports in America: schools. In spite of its clear benefits, triathlon is not popular in American schools, and public and private schools are where we first learn to love a particular sport. Very few colleges or universities even offer a scholarship for triathletes, and that, too, is a problem. Student athletes focus on sports that will get them a scholarship, so sports that are perceived as hobby or fringe sports do not draw the interest of students.

Bussjaeger said that most triathletes he has met are over 30. It is a sport that people come to later in life, and the club is working to get more young people involved. At a time when we are considering the long-term health impact of sports like football, triathlons might have a fighting chance, as all three sports promote healthy living with very low health risks. Also, unlike specialty sports, the skills associated with triathlon can be practiced deep into our AARP years.

“When you participate, they write your age on your calf,” Spears explained, “and you would be amazed at the range of ages out there. At the last El Reno event, we had a man who was 78 participating. I saw his age on his calf when he lapped me!”

A few of the Tri-OKC club members, including Spears, have qualified for Team USA. They will participate in the ITU World Triathlon Grand Final in Chicago in September. The international competition is generally better than Team USA because they have better programs. It is one of the obstacles that Tri-OKC is trying to help rectify.

“We are working on developing better programs and attracting younger people to the sport,” Bussjaeger said. “The USA teams get their butts kicked in international competition, and we would like to change that.”