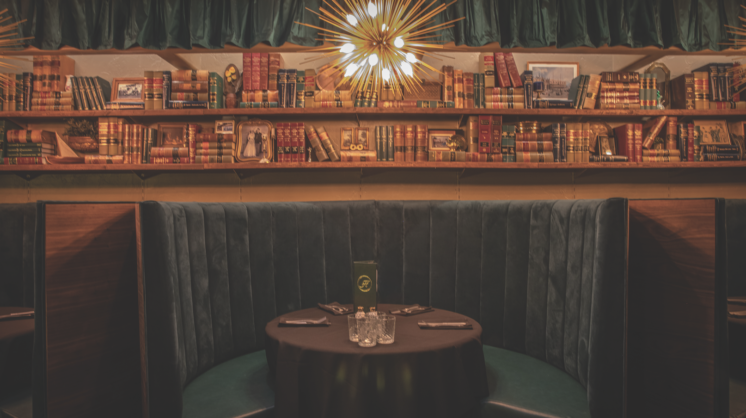 A guy picks up a prescription at Wal-green’s, and then decides to see what’s on the back side of a mall because he’s looking for a place to build a local restaurant. Creeping slowly across the speed bumps, he’s smitten with a small courtyard and a metal gate with a script “H” welded into its center. “I’d been looking for a place with some age, some character,” J Mays says. “I knew when I saw it that it was the vibe we wanted.”

Mays and his partners Chris Kana, Stephanie Miller and Michael Paske now own The Hamilton, a new Okie-centric, upscale supper club on the east side of Northpark Mall (formally The Shoppes at Northpark, but locals rarely call it that). Like many entrepreneurs, the team was seeking a location outside the urban core. “We love what’s happening in the core, and we think we can bring some of that sense of ‘interesting’ and ‘cool’ you find in the urban core to this part of town,” says Mays. “Honestly, Robby Vernon at Hacienda Tacos gets a ton of credit for getting the ball rolling at Northpark.”

If there is a monument to post-WWII prosperity – and possibly excess – in America, it is surely the shopping mall. Simultaneously a community center, food court, shopping destination and entertainment complex, the mall has historically been a showcase for what is hip, as well as the canary in the coalmine of a community’s health and vitality. If the neighborhood has passed its prime, the mall will tell us.

Northpark opened in 1973, and at that time, it was the state’s largest Safeway grocery store and an AMC 4 Theater complex; renovations and expansions turned it into a full-fledged mall by 1981. When Robby Vernon, a hospitality industry veteran, opened Hacienda Tacos on Dec. 23, 2016, much of the food service community balked at the move. The conventional wisdom was that everything important was happening inside the core: Thunder games, popular restaurants, the major districts, national attention, bar scene – all of it.

To say that Northpark has had its share of ups and downs is only to say what everyone from Oklahoma City already knows. It was nearly wiped out by the oil bust of the ’80s, and the rise of online purchasing has not helped. The AMC eventually offered dollar movies, and the mall became perceived, somewhat fairly, as a place for mall walkers and niche, upscale retailers. “I remember lying in bed after signing the lease, thinking, ‘What have I just done?’” Vernon says. “But then I replayed all the positives in my head, and I was fine.”

Kevyn Colburn is the vice president for Tom Morris Enterprises, the company that owns Northpark, and has owned it since it opened. For a shopping mall to be owned by the same family for 46 years is exceedingly rare, and Colburn said that’s part of the advantage of choosing Northpark. “Because the Morris family has always owned it, we have a demonstrated commitment to the area,” she says, “and we give back to the community. We can also get you space for a third of what some new developments around town cost.”

Without being too specific, a new business can get into Northpark for a third of what space on W Memorial costs, and a third less than what space in Midtown costs. That translates to small- er ticket prices on food and services, and it gives a powerful, money-saving incentive to take chances outside the core or even outside major retail corridors.

Mays, whose ownership team has concepts downtown, just north of May and Memorial, and in Tulsa (Roosevelt’s and R Bar), said The Hamilton will not be the last concept they build in Northpark. “It has tons of parking, easy access to the highway, easy ingress and egress and neighborhoods all around,” he says.

Finished with care and great attention to detail, The Hamilton is a treat for lingerers.