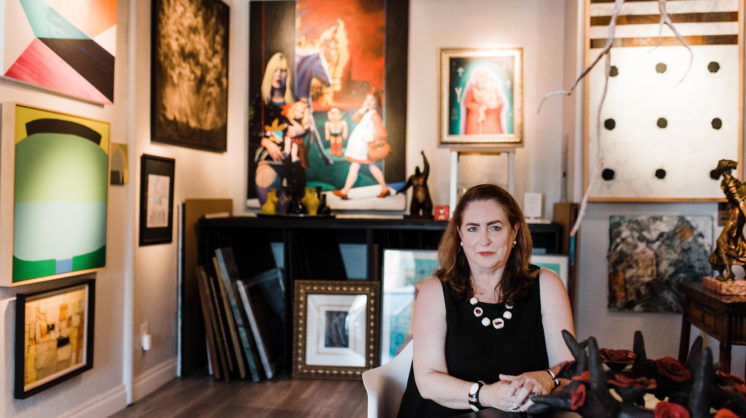 When Creative Oklahoma chief executive officer Susan McCalmont retired from the organization in 2019, she still had in mind key components of that organization’s mission: advancing innovation in areas of business, education and culture. So when she opened Objets Trouvé at 4329 N Western, it was an exploration of those forces that extended far beyond what she originally imagined.

“It is like the work I did with Creative Oklahoma; shining the light brightly on Oklahoma talent and Oklahoma artists,” McCalmont says.

Through Objets Trouvé, McCalmont hopes to showcase deceased artists such as R.V. Goetz and ceramicist Montee Hoke, but also to draw connections between their work and the many Oklahoma artists they influenced. In that sense, McCalmont designed Objets Trouvé to be less of a traditional art gallery and more like a visual exploration of how Oklahoma art evolved and continues to evolve.

“I feel that some of the visual artists here need to be known outside of Oklahoma,” she says, “and at the same time, I was starting to come across a lot of work of older artists or artists who are deceased, picking up works at estate sales or whatever. Really undervalued work by artists like R.V. Goetz.”

Goetz, who worked in Oklahoma until his death in 1991, was an acclaimed painter of still lifes, landscapes and portraits who taught at the Goetz School of Art in Oklahoma City as well as locations in Santa Fe, New Mexico and upstate New York. His portrait of President John F. Kennedy is in the Oklahoma City Museum of Art’s permanent collection. Goetz was also the patriarch of a family of artists, including his wife Edith Goetz, his son William Goetz and daughter Mary Anna Goetz.

McCalmont says that Objets Trouvé “is a space where we can have a conversation about the continuum of art, so I mixed the old and new art together. It’s a very small space – it’s only 350 square feet – so in the space, we’re not having traditional exhibitions.” 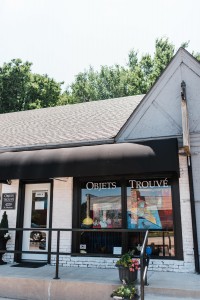 Instead, Objets Trouvé indulges in juxtaposition, placing several works by Cheyenne-Arapaho forensic artist Harvey Pratt in the same space as “Doll House,” a breathtaking pop surrealist work by George Oswalt and pieces by Paul Medina, Christie Owen and Danny Rose, an abstract artist who recently participated in a Zoom-enabled artist conversation on the gallery’s website. Other artists include sculptor Nathan Lee, whom McCalmont said is in near-constant demand at Objets Trouvé, as well the work of charcoal and oil artist Marc Barker, geometric artist Bryan Boone and Albanian-born Oklahoma painter Eva Peza.

“I think for most people, when they walk in, they don’t know what we are,” McCalmont says. “They’re not sure and a little surprised, maybe. But the curious lookers who walk through the doors, they get very excited, because they have not seen that juxtaposition before. Even if they are buying original work, they may not understand the connections of historical work.”

When McCalmont opened Objets Trouvé in November 2019, she hoped to slowly establish a foundation of support for the gallery, building greater familiarity for her collections among local collectors and aficionados in Oklahoma before spreading outward with visions of establishing a national profile. But then, after only four months of operation, the coronavirus pandemic forced Oklahoma businesses to shutter operations for several weeks. McCalmont, whose husband, banker J. Ralph McCalmont, lives with an autoimmune deficiency, made an immediate decision about how Objets Trouvé would operate.

First, she hired a marketing team from New York that could establish an international reach, far transcending Objets Trouvé’s originally local marketing plan. Her team was able to position the gallery as an art destination with a global footprint.

One innovation McCalmont and her team developed was a weekly artist conversation on Zoom. In the early running, the conversations were mostly about the experience of artists being forced into solitary environments by COVID-19, and how their art was impacted by the circumstances surrounding the pandemic. But these conversations, much like the work displayed in Objets Trouvé, began to evolve.

“Then they started saying, ‘Can we invite our friends? Can we invite colleagues?’” McCalmont says. “Suddenly, there were 30 artists online from around the world.”

These artist conversations were scaled back to bi-weekly when restrictions were lifted and many artists returned to their day jobs, but the effect of these Zoom-enabled discussions was felt immediately. McCalmont was able to bring in artists from around the world, greatly expanding Objets Trouvé’s scope of art.

“For example, there is now this huge conversation between artists in Northern Ireland and our Oklahoma artists, because one of my friends from Northern Ireland was supposed to visit, but that got cut short – she was supposed to have an exhibition in April,” McCalmont says. “So, she did studio visits with all of our Oklahoma artists. And now, she is connecting them, and she has recommended that many of them apply to the Royal Ulster Academy show in Belfast. I think that’s just kind of the beginning of how there will be exposure outside of Oklahoma.”

COVID-19 embedded an ironic twist into Objets Trouvé’s story. Because McCalmont and her artists were forced to socially distance themselves or quarantine, they found new avenues through which to project their work across all geographical divides. As such, Objets Trouvé’s branding has moved from an Oklahoma-centric marketing strategy to a quality-based global strategy.

Later this year, Objets Trouvé will establish virtual viewing rooms for its artists, a kind of digital gallery space that will allow each artist to have a showcase that more closely resembles an in-person exhibition. Couple that with the site’s sales platform, and McCalmont said there are endless possibilities.

“The artist can live anywhere in the world, because through the e-commerce platform, they just have to have the ability to ship the work of art from wherever they live,” she says. “I hope to handle those logistics from my side, and the purchaser pays the shipping cost.”

The gallery’s first sale pointed the way. McCalmont said that the first work sold went to a collector in London.

“I have no illusions that all of this will happen quickly, because every gallery and auction house is trying to figure this out,” she says. “Sotheby’s, Christie’s and Phillips are all going from this dependency on huge live auctions to where you cannot have a crowded room for an auction. So, I think this is going to be with us for a long time, even post-COVID. The art world is changing, where online connectivity and commerce will be a large portion of what we’re doing.”