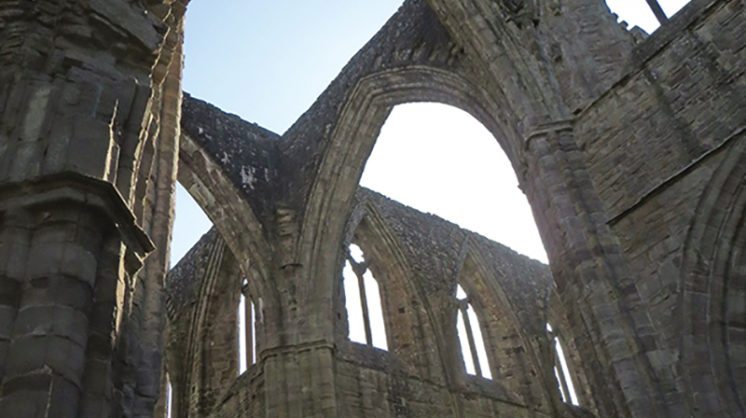 An Italian town on the coast of Wales? Pastel stucco, old stone, graceful towers … and, no, it wasn’t a dream. Well, actually, it was. Architect Clough Williams-Ellis believed that good design could be built to complement any landscape. From 1925 to 1975 he worked to create a fantasy village on the welsh coast.

Portmeirion is a pastiche of styles with a Mediterranean feel. Williams-Ellis combined new construction honoring old styles and bits and pieces of manor houses and monuments he saved from demolition.

The porch of the octagonal Pantheon was originally a fireplace and minstrels’ gallery in an estate in Cheshire. The Gloriette was once part of the portico at Hooton Hall, another Cheshire manor. The Town Hall incorporates elements from Emral Hall, one of Wales’s great houses, and the Bristol Colonnade (1760) which once stood in front of the bathhouse of a copper magnate in southern England.

Each year, approximately a quarter of a million people visit Portmeirion, a village where no one lives. Many of the buildings are available as self-catering holiday lets. A hotel on the property and accommodations in a restored manor house just outside the village gates, Castell Deudraeth, provide more options.

The village also has a number of interesting shops including an excellent bookstore, several eateries and a pottery shop carrying Portmeirion ware designed by Williams-Ellis’ daughter, Susan.

The High and Mighty and the Hoi Polloi By this time – a week into our trip – we were getting a bit blasé about castles but we couldn’t skip Caernarfon. Four of King Edward I’s northern Wales castles, Caernarfon, Beaumaris, Conwy and Harlech, have jointly been designated a World Heritage Site. The Welsh were an unruly bunch and it took a good deal of the late 13th century and a tremendous amount of money to keep them under English control.

The first English Prince of Wales was born in Caernarfon in 1284 and Prince Charles was invested there in 1969. The castle overlooks the town and the Seiont River. Below the castle, the parking lot sits on the site of a once-important slate-loading port.

While coal mining was the industrial staple of southern Wales, slate mining was the big industry of the north. A visit to the National Slate Museum gives insight into the life and work of Welsh slate miners. Only a few quarries are actively mining slate today. The museum is part of what were once 19th century workshops for the giant Dinorwig Slate Mine. One of the largest slate mines in the world, the company employed 3,000 workers in 1870.

Highlights of a visit include watching slate splitting demonstrations and marveling at the 50-foot waterwheel which turned all the belts operating machinery throughout the workshops. The slate mine closed in 1969, the day after delivering its last order – the massive slate dais used in the investiture ceremony of Charles, Prince of Wales.

We still had to visit two more of King Edward’s castles, Beaumaris on the Isle of Anglesey and Conwy. Rick Steves describes the town of Beaumaris as a 13th century English green zone surrounded by Welsh guerrillas. The last of Edward’s castles, it may be the most aesthetically satisfying with its symmetrical design. Unlike other castles, it was never attacked and was never finished.

Conwy Castle, built between 1283 and 1287, was briefly occupied by the Welsh in the 15th century but reoccupied and later pretty much abandoned by the English. During the English Civil War (between King Charles I and the parliament) it was reopened by royal forces. It was captured in 1686 by the parliamentary army (Roundheads) who later destroyed parts of the interior of the structure to prevent its re-use by the Royalists.

To me, Conwy was the most forbidding and impressive of the castles we saw. It stands atop a rocky base with eight massive towers and high walls. A city wall surrounds the adjoining town.

We loved Conwy – and not just because we found the best pastry shop ever! Conwy is home to Plas Mawr, one of the most complete and interesting 16th century homes anywhere. Not only were the rooms and furnishings fascinating, there were many displays about life in medieval Wales covering subjects from eating to elimination, the plague, medicine and “modern” medieval conveniences.

I’m pretty sure there’s a 10-year-old boy somewhere in my brain because I find potty history so interesting. I loved it that in the city wall, there were a dozen outcroppings (or should that be outcrappings?) – latrines built by Edward’s master builder for the convenience of his most important civil servants.

From the ridiculous to the sublime, we left Conwy for Holywell, the site of the miracle of St. Winefride. Legend has it that Winefride rejected the amorous advances of a local lad who was so enraged that he cut off her head. She had almost reached the safety of a monastery when her pursuer struck. Where her head landed, a spring of water arose. Bueno, the monastery’s abbot picked up her head and placed it on her body. She was restored to life and the site of her well became a pilgrimage destination famous for miraculous cures.

The present building sheltering the well dates back to the early 1600s but the well itself is the oldest site of Christian pilgrimage in Great Britain. Both Richard the Lionheart and King Richard V sought intercession from St. Winefride before battles and a young Victoria visited here before her accession to the throne.

A Final Word’s Worth Although William Wordsworth is most closely associated with England, in 1798 he composed a Welsh-set poem, “Lines Composed a Few Miles above Tintern Abbey.” Founded in 1131, the abbey flourished until the reign of Henry VIII, when, in his dispute with the Catholic Church, most of the church properties were destroyed or converted to other uses. In the 18th century, the ruins captured the fancy of the Romantic school of artists and writers for its striking setting and gothic architecture.

A visit to Tintern in southeast Wales was our last Welsh stop and a worthy one. The soaring stone arches against a backdrop of tree-covered cliffs and the serene river Wye alongside the property made a grand coda to the symphony of sights we enjoyed in this beautiful country.