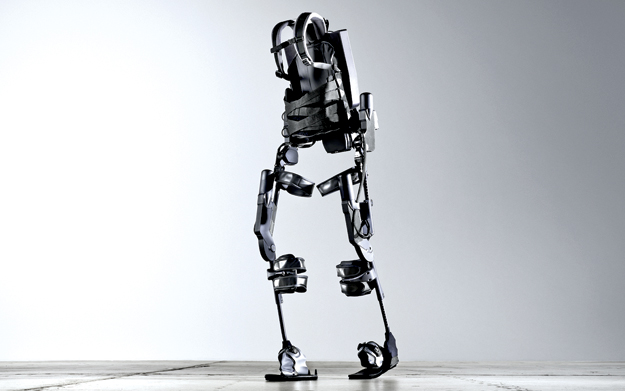 » DVRs and iPods are great, but this is the kind of feat that should make you proud that we as human beings invented technology. Paraplegic patients at the INTEGRIS Jim Thorpe Rehabilitation center who have been in wheelchairs for years have the chance to stand on their feet again, now that the facility is one of the very first in the world to utilize the Ekso bionic suit. It’s part of how medical director Al Moorad, M.D., describes the center’s goal: “to offer our patients the most advanced and effective technology available anywhere.” Using the wearable robotic apparatus requires practice, patience and the assistance of a physical therapist during training, and so far its use is restricted to medically supervised environments like Jim Thorpe – but experienced users can don the device in about five minutes. And then they can walk.

» It doesn’t necessarily take an expert to produce something beautiful – the Oklahoma Horticultural Society welcomes neophytes and seasoned professionals alike – but when its members put on a show the results satisfy even the most discerning viewer’s visual appetite. On September 22, homes across the city will open their gates to guests and exhibit a host of exceptionally splendid natural wonders in the Garden Tour for Connoisseurs.

The eight stops on the self-guided tour comprise a dazzling spectrum of colors, designs and atmospheres. Each will welcome visitors 9am-4pm, and – since the entire organization is run by volunteers – all proceeds go to education, either in the form of annual scholarships to Oklahoma colleges or bringing top-name speakers to its monthly community lecture series. Tickets are $15 at each stop on the day of the tour, or $12 in advance; visit ok-hort.org for locations, ticket outlets and more information.

» “Sing, goddess, the anger of Peleus’ son Achilleus and its devastation…” That’s the first line of Lattimore’s translation of The Iliad, Homer’s enduring epic of the Trojan War. The Song of Achilles, Madeline Miller’s recounting of those legendary events, is told from the viewpoint of the loyal Patroclus and is driven not by the hero’s wrath but by their shared love… although the devastation remains inevitable. A gripping tale of conflict between kings and gods, immortal fame and searing loss, Miller’s first novel is a doozy, and won her the prestigious Orange Prize for 2012. She will be signing copies at OKC’s Full Circle Bookstore September 18; call 842.2900 for details.

» Serial killers are bad news personally but covering and helping catch them are good subjects for news professionals, so reporter Bridgette Allen is thrilled to jump on one’s trail – except that he’s on her trail as well in Impression of Red, a new thriller from OKC author Kim Mizar-Stem available at impressionofred.tateauthor.com.

» When the wind comes sweeping down the plain, it makes the Oklahoma Medical Research Foundation greener. The OMRF’s new research tower in OKC requires a lot of power, but is generating some of its own with a set of wind turbines atop its roof.

Made possible through a gift from the Puterbaugh Foundation, the 18.5-foot-tall aluminum and steel turbines will generate an estimated 85,500 kWh annually – enough to power seven average-sized homes for a year – significantly lessening the facility’s electricity demands and reducing its carbon footprint. It’s part of an overall energy-efficient design that is expected to receive a gold LEED (Leadership in Energy and Environmental Design) certification… and OMRF’s way of helping to sustain the planet as well as human life.

When You Wish Upon Stardom…

» Fame costs. And right here is where these singers start paying – in sweat: outside Chesapeake Arena on a blistering hot day, as nearly 10,000 people (many of whom had been lined up since midnight the night before) auditioned for season 12 of “American Idol.” History indicates that only about 45 of them will make it to Hollywood, but hope springs eternal.

» Even after the fires that ripped through central Oklahoma in early August are extinguished, the devastation they wrought remains – but the kindness of others can help restore some of the loss. Donations are welcome and encouraged; visit disaster. salvationarmyusa.org or okc.redcross.org.

Meanwhile, OKC nonprofit Infant Crisis Services is focusing on a more chronic problem: when money is tight, too many parents can’t afford clean diapers, which can lead to health problems and even developmental concerns for the underserved children. ICS gives away over 9,000 diapers weekly, and invites the community to donate during Diaper Needs Awareness Week September 10-16. Visit infantcrisis.org for details.

Jewel of the West

» After a fire destroyed part of downtown Hennessey, Kirkpatrick Oil Company – an active area presence for 60 years – decided to support the community by moving its district headquarters into the vacant spot. That would constitute a happy ending anyway, but thanks to the creative design of Elliott + Associates Architects, there’s more to the story. Dubbed “Jewel Box on Main Street,” the resulting building respects the site’s historical context while bringing the community a modern spirit… along with outside acclaim: shortly after its dedication, it received the Oklahoma chapter of the American Institute of Architects’ prestigious Honor Award.

The Drive for Improvement

» Vehicle sharing service TIMECAR, which allows members access to a car on an hourly basis for as long as they need it, recently added a third location at the Crowne Plaza hotel on the Northwest Expressway to its lots at OCU and OU, making it yet more convenient for infrequent or non-resident motorists.

» When entrepreneur Eddie Grant founded a record label in 2009, he chose Moore as the location. Not because he couldn’t find opportunities in Nashville or Hollywood – there are now satellite branches in both cities – but because this is where he wanted to be. “Think of all the great artists from Oklahoma,” Grant says, “then you’ll know why I decided to keep the company here. Why take the label out of the state? Why not keep it here to attract more talent?” He’s now co-CEO of Land Run Records with Grammy-winning producer Jack Joseph Puig, and attracting that talent: Nicnos, Lower 40 and 17-year-old OKC native Kylie Morgan, named “Who New to Watch” by the Country Music Association, are on the label.

» Howard Brady, on the other hand, has never been a fan of labels or genres – he somewhat grudgingly describes his independent CD “Ghost of the Rio Rojo” as “Red Dirt Rhythm and Blues and ‘other stuff.’” The disc’s highlights include “Moonshine Highway,” possibly the gentlest, most wistful song ever written about choosing to remain a bootlegger because the money’s so good; the beatific, sax-enhanced “Since I Met You”; and the title track, on which singer and picker Brady also blows a mean harp.