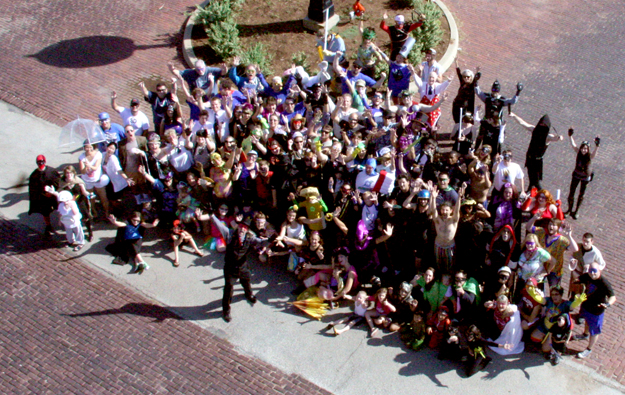 Look! Down in Pauls Valley!

» Citizens of the sleepy south central Oklahoma burg slept more soundly than usual August 4, as the city streets positively teemed with costumed do-gooders ready to fight evil, uphold truth and justice and celebrate International Superhero Day at the city’s Toy and Action Figure Museum. The brainchild of museum curator Kevin Stark, it’s an idea with its genesis in the Gotham City of the old “Batman” TV show – a city where residents never boggled at the Dynamic Duo’s outfits.

“I assumed that it was so common to see heroes running around in colorful costumes that it just seemed like an everyday happening, and therefore didn’t warrant much notice,” Stark smiles. “I wanted to create that here; that there would be so many costumed heroes running around that it was commonplace! So, really, it started as a joke and an experiment and turned into a wonderful day.” And a historic one as well: rewarding the event’s emphasis on creativity, Pauls Valley now holds the world record – a whopping 124 – for most original costumed superheroes in one place at one time.

But for how long? Stark says plans are already underway to supersede that sensational figure at future festivities, which should include feats of strength and a “Save the Baby” obstacle course.

Stark himself made an appearance in character as The Red Mask (left), but at this rate he may have to change his costumed identity… to THE VISIONARY. (Bum-ba-daaaaaa!)

» Curioser and… well, bloodier. Bestselling Oklahoma author Gena Showalter, the prolific pen behind the Intertwined and Lords of the Underworld series, is focusing her attention down the rabbit hole with the paranormal thriller Alice in Zombieland, now available in bookstores and at harlequin.com. The first installment in Showalter’s latest young adult series introduces Alice Bell, a 16-year-old orphan who sees dead people – but rather than somber ghosts, they’re murderous reanimated corpses, and fighting them will mean dealing with her strange attraction to menacing rebel Cole Holland. Though clearly inspired by Carroll’s classic, it deals with passion and violence rather than whimsical wordplay; think less Queen of Hearts and more Queen of Braaaaaains.

» The Norman Park Foundation loves the great outdoors, and is rewarding Oklahomans who share that affinity and can make it look good: the Foundation’s annual Tree Photo Contest has increased the rewards for outstanding depictions of trees and their aesthetic and environmental benefits to a total of $3,000 in prizes awarded in amateur and professional, color and black-and-white divisions. So if you think that they shall never see / a photo lovely as your tree, get your submission in by November 5 – visit normanparkfoundation.com for details and an entry form.

» Now that the heat is off, sightseers are hoping for some fall fireworks from the state’s arboreal population – but catching the leafy show at its most colorful can be tricky. The Oklahoma Tourism Department notes that last year, foliage seemed to peak between the third week of October and the second week of November, and suggests visiting travelok.com/Fall_Foliage_and_Festivals for weekly updates starting in early October. The Myriad Gardens, no strangers to botanical beauty, are betting on October 12-13, when they’ll ferry guests on a luxury overnight bus tour to Hot Springs and back along the scenic Talimena Drive – visit myriadgardens.org for details. And if you happen to be blazing your own trail through southeast Oklahoma, the 26th annual Robbers Cave Fall Festival and Car Show is October 19-21 in beautiful downtown Wilburton.

» If retirement is what someone does when they’re no longer capable of or motivated to continue their career, fans of Wanda Jackson can rest easy – the Queen of Rockabilly still has more than her share of the verve that made Bob Dylan call her “an atomic fireball of a lady,” and as for choosing to hang up her career, it’s no coincidence that her new album is titled “Unfinished Business.” Released October 9 (just a few days before her 75th birthday) by Sugar Hill Records, the 10-track effort produced by Justin Townes Earle is the Oklahoma legend’s 31st studio album and one that she calls a return to her roots of country, blues and rockabilly songs. “The band was extra tight; the record just sounds terrific and I’m hoping that my fans enjoy listening to it as much as I enjoyed making it.”

» KOSU’s recent involvement in covert operations has proven music to the ears of central Oklahoma’s independent music lovers: the NPR station found at 91.7 FM on OKC dials has partnered with ultra-cool underground station The Spy, bringing its spectrum of original programming back to the local airwaves. General manager Ferris O’Brien vows, “We promise to continue bringing the listener the best in new music as well as classics, producing the best specialty shows in the country.”