Where the Treetops Glisten - 405 Magazine 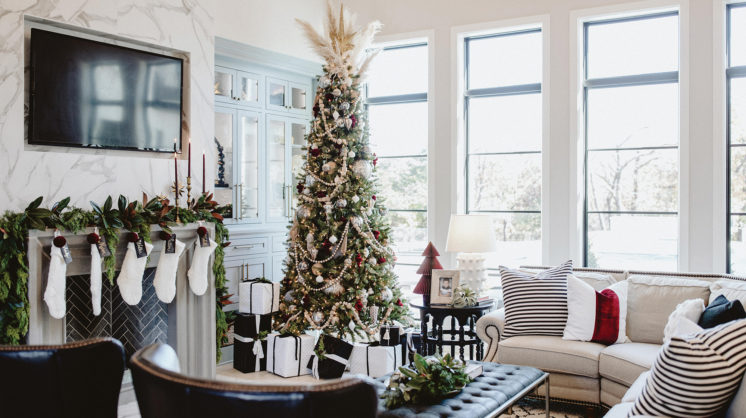 If Kindall Donahue closes her eyes and smells hints of vanilla and almonds permeating her kitchen, she pictures herself in another place and time.

“I’ve made these cookies since I was a little girl, as long as I can remember,” Donahue says. “I made them with my Mimi every year for Santa. It wasn’t Christmas unless we had these cookies.”

Mimi’s almond roca and sugar cookies have found a new home in a bright, open kitchen in Coffee Creek Hills. The Donahue boys – Sutton, age 5; Walker, 8; and Mason, 10 – can’t resist dipping their fingers in the batter and icing as they go. Their dad, Andy, stands by as another eager taste-tester. Kindall’s mother is there to carry on the baking tradition with her grandchildren. Together, they follow the recipe cards, penned in Mimi’s handwriting. They could bake the cookies from memory, but pulling out the original cards is part of the ritual.

This year marks the second Christmas the Donahue family is spending in their new Edmond home, which is situated at the front of five lush acres. They completed the 6,000-square-foot project in June 2019. Behind the home, the Donahues cut a trail through the trees that leads to a treehouse, firepit and campsite. The setup prompts new family traditions, such as Thanksgiving campouts with cousins and uncles.

“We’ve watched this place come together from the ground up, so it’s been really fun to look around and see everyone all together – and the kids with their cousins, making their own memories,” Donahue says.

The sprawling property evokes childhood memories for Andy, who grew up on five acres in Enid.

“Andy had the best time growing up, and he has all these stories. He really wanted that for our boys,” Donahue says. “They do their archery. They shoot their pellet guns. They have four wheelers that they ride through the trail. They’ve really enjoyed having the space.”

Appreciation of the great outdoors appears in the home’s modern-transitional design by Dovetail Studio. Oversized windows provide abundant natural light and views of the wooded terrain. Huge pocket doors slide open to connect the game room to the outside patio. Building materials include raw woods, such as white oak in the master bathroom and pecky cypress featured in the large beams in the main living area, the range hood in the kitchen and the ceiling in the study.

“We were careful to incorporate some natural elements, like pecky cypress in its natural form,” says interior designer Natalie Turner. “We didn’t stain or change it in any way. The wood adds texture and warmth.”

Turner owns Dovetail Studio with interior designer Taylor Malone. Naturally, when they were tasked with decorating the Donahue home for Christmas, they pulled in earthy elements including cranberries, wooden beads, pampas grass, eucalyptus and fresh greenery found around the home.

“We went through the property and foraged juniper and magnolia,” Malone says. The designers used faux pine garland to provide length and structure, then elevated the look by weaving in a variety of live sprigs.

“For the Donahues, and pretty much any home that we style for Christmas, we style for the family,” Turner says. “We tailor the design to them, whether it’s their personality, the character of the home or their likes and dislikes. This is their Christmas and, hopefully, it will be a reflection of them.”

Donahue loves light neutrals, as shown in decorative wooden details and the row of chunky knit stockings lining the mantel. Gold bells play off the brass hardware in the living room and kitchen. Gold stars mimic the star-studded sconces and wallpapered ceiling in the powder bath.

The primary color used in the décor is a deep cranberry red. Velvet ornaments and florals in vases of floating cranberries showcase the color throughout the home.

“I love the touch of cranberry to bring in a Christmas red without it being a candy red,” Malone says. “The flower arrangements are asymmetrical, organic and modern.”

The Donahues gave Dovetail Studio free rein on holiday design. It’s a relationship that has been growing since they hired Dovetail Studio in 2018 to review architect Brent Gibson’s blueprints.

“With Kindall and Andy, from the beginning, they truly let me design and get extremely creative,” Turner says.

Turner tweaked the floorplan to save on square footage and streamline functionality. From then on, she guided every design decision to create the bright, modern and timeless home the Donahues desired.

“Most clients can be overwhelmed when building a custom home,” Turner says. “They are used to looking at finished products on Pinterest or Houzz, but when they are actually going through the process, they realize the selection they have to choose from.”

“You have to pick out a type of brick – who knew there were so many bricks?” Donahue says with a laugh. “I didn’t pick one thing without running it by Natalie. I joke now that I can’t even go to Target and look at home items without thinking, ‘I’ve got to ask Natalie,’ because she’s so smart. She’s great at pairing stuff together.”

Painted in a rich blue with a zebra rug and bookshelves styled to have an eclectic, curated feel, the study is one of Donahue’s favorite rooms. The golden tree collar, ornaments and star on the Christmas tree glow against the high-gloss paint, called Moscow Midnight by Sherwin-Williams.

Another standout area of the home is the living room with built-ins painted in a cool blue, Sherwin-Williams’ Stardew, and a magnificent fireplace.

“I really wanted to achieve the look of a marble slab as the face of the fireplace, but I felt it needed more dimension than that and we still had a budget to meet,” Turner says. Turner used a large-format faux marble tile, applied with minimal grout lines, to create that look. Then, she added a charcoal gray cast stone to frame the firebox.

Stockings hanging on the mantel and a stunning tree with wrapped presents underneath make this room ready for new holiday memories. Soon comes the morning when three excited boys rush in, wearing matching PJs. No doubt they’ll be checking to see if Santa ate all the cookies and, perhaps, left anything behind.