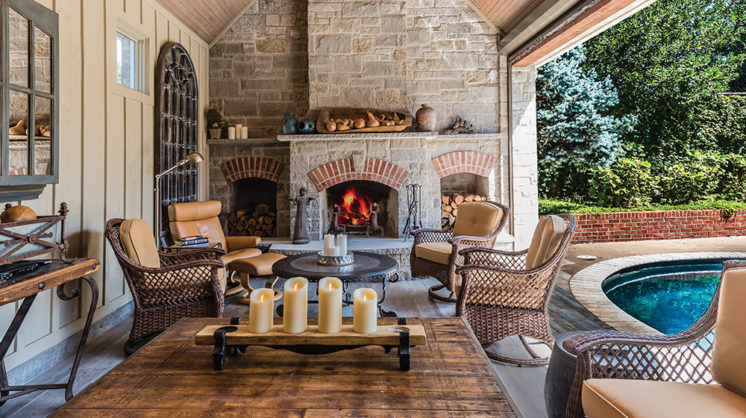 Many remnants of an Oklahoma summer — warm, sunny days with the a/c on high — often linger well into October and November, but in a matter of hours, a balmy fall afternoon can turn as frosty as a jilted lover. However, our relationship with the outdoors doesn’t have to succumb to the whims of Oklahoma’s (predictably) unpredictable weather. As the mercury falls and days grow shorter, a few enhancements to warm up outdoor living spaces can ease the transition from autumn to spring, and help us make the most of the months that lie ahead.

Homeowners who entertain year-round often have a high level of commitment to taking the party outdoors, no matter the weather. If you’re one of them, the first item on your wish list should be an outdoor fireplace.

At a holiday party last year, half the guests made a mass exodus from the kitchen when they heard there was a fireplace off the patio. (Nothing whispers “come hither” more compellingly than the snap, crackle, pop of a fire.) When I stepped outside, I saw a slack-jawed crowd gathered around the fireplace, mesmerized by the flames. If the hostess hadn’t let the fire burn down, they’d probably still be there.

“Fire and water are magnets for people and animals,” explains Terry Carlson, who, along with her husband and business partner, Anders, own the Oklahoma City-based company Anders & Terry (formerly AC Dwellings). Together, the couple has spent the past two decades creating cover-worthy living spaces that exude an irresistible magnetism on their own.

“We started our company during the ‘covered patio era,’” Carlson recalls. “The whole outdoor living concept hadn’t gained the momentum it has today. But Anders and I love to be outside; we’re outdoor people.”

Years ago, when Anders and Terry met with a client who was planning an expansion project, the subject of an outdoor fireplace naturally emerged from a conversation about how nice it would be to extend the indoor living space to the outside. Predictably, the client was the first of a succession of several dozen homeowners who have turned to the Carlsons to do the same. 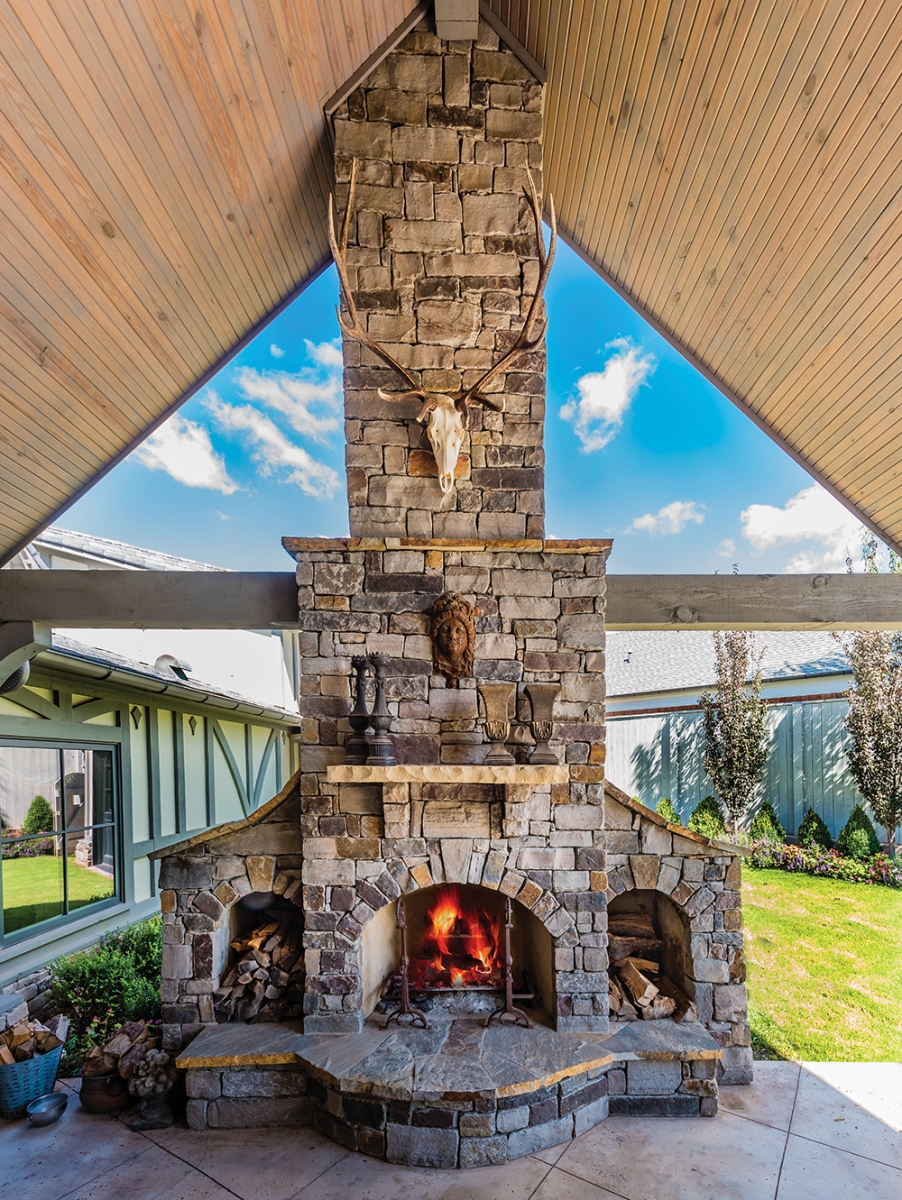 Figuring out where a fireplace will go is always the first and most important consideration, according to Carlson. Although your existing space may determine its placement — far from the 75-year-old oak and the dryer exhaust, let’s say — a fireplace will create a more functional extension of the indoor living space when it’s enjoyed closer to the house.

“Proximity to the home is better than a far-off corner of the yard, when it comes to placement,” Carlson says. “To benefit from the warmth of a fireplace, it has to be situated under cover to retain its heat. Likewise, you’ll want it to be accessible if it’s raining.” In addition to creating a lovely focal point that’s more visible from the indoors, fireplaces often shield an outdoor living space from high winds, something that’s particularly desirable to homeowners whose property doesn’t have an abundance of trees.

The good news, Carlson said, is that outdoor fireplaces no longer have to be prohibitively expensive. Quality materials abound for just about any burning preference — wood, gas logs, fire glass shards (check them out; verrrry cool) and geo spheres are just a few fire-starters. The classics never die, of course, so most homeowners still gravitate toward the traditional one-two punch of fire building: a gas starter with real wood. “People love to tend a fire,” Carlson says. “They love to smell it, listen to it, poke at it, add wood to it and keep it going.”

Even more homeowners prefer to combine the primal element of fire with the earth’s other primal element, television, for their outdoor relaxation or entertaining. Few things are more enjoyable than watching the big game outside, next to the fire on a chilly autumn day. Only a crockpot of Ro-Tel could make things better.

If you already have a fireplace on an exterior wall, you might have visions of knocking out the back of it to create a two-way fireplace. Don’t.

“You don’t want to knock out the exterior wall, because the interior of your home would then be exposed to the elements,” Carlson says. 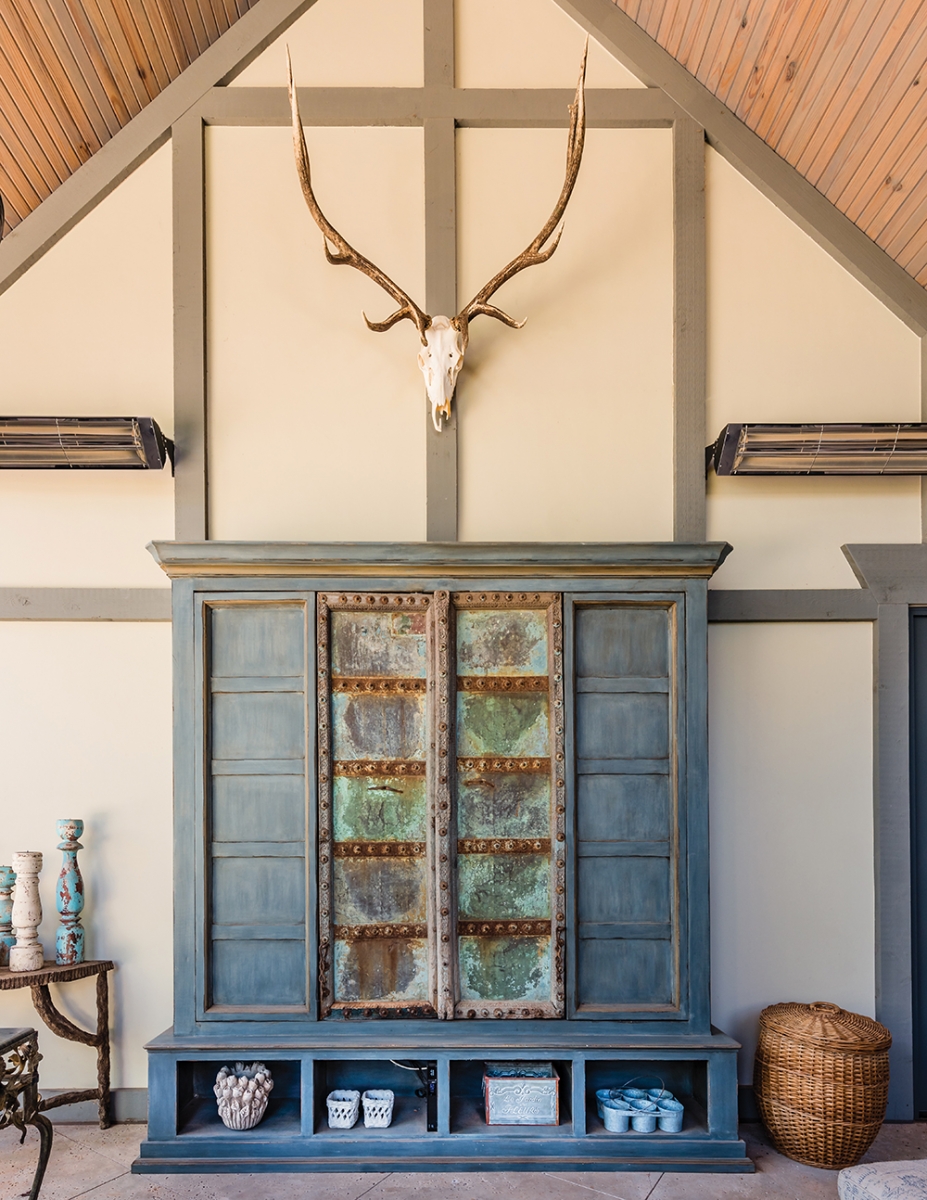 If it’s a two-way fireplace you want, perhaps to maintain a view of both the pool and the patio, make it freestanding. Carlson added that, while two-way fireplaces are aesthetically appealing, they’re not noted for their ability to draft well, which could present a challenge in keeping a fire going. For that reason, Terry recommends using (artificial) gas logs — but not the plastic logs that kept Grandma’s fireplace looking so snappy for 50 years. “Artificial gas logs have come a long way,” she says. “They look fantastic and they’re really effective.”

If 2017 isn’t the Year of the Fireplace at your house, take comfort in knowing that there are more ways to warm up your outdoor living space as cold weather approaches.

Let’s all agree that we live in magical times when the environment we desire can be created with the flip of a switch. About three feet long, electric heaters can be inconspicuously flush-mounted to the ceiling, providing significantly more warmth than a fireplace. Installing heaters along the open perimeter of an outdoor living space, as Anders & Terry frequently does, creates what Carlson calls a “heat wall.”

Even with an outdoor fireplace, electric heaters make sense, Carlson said, pointing out that they’re perfect for warming up your surroundings in just a few minutes. Once the fireplace heats up, simply switch off the heaters. Electric heaters can be costly, but like everything else worth having, the good ones are worth the investment, she said.

Containing ambient warmth in an outdoor space is likely the greatest challenge to maximizing the time you’ll spend outside in chilly weather. An electric, retractable windscreen may be the most functional line of defense against the harsh elements that stand between you and your exterior living space. Operated by remote control (that’s really all I need to hear), outdoor screens disappear quietly into a ceiling-mounted housing unit when they’re no longer needed to block heavy winds, diffuse the afternoon sun or re-route flying insects.

The most user-friendly method of creating warmth in your outdoor living area, according to Carlson? “I always keep a basket of colorful blankets nearby. What could be easier?”