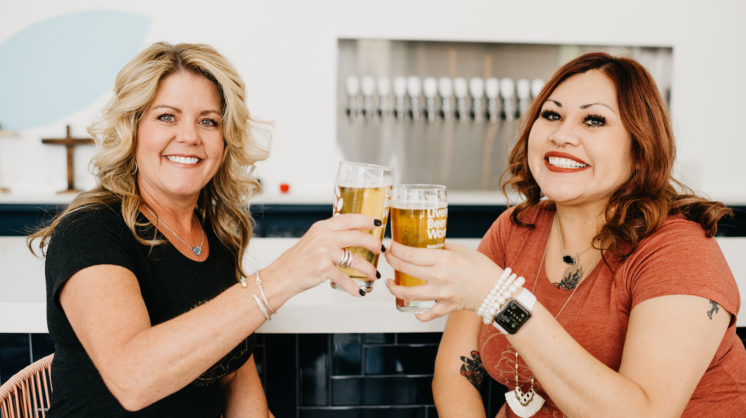 “Are you sure you want a stout?”

“I’m not sure you know what a porter is.”

“We only have beers on tap, no cider.”

In places where human behavior is studied with a critical eye, these are called microaggressions. To the women who are part of the Women’s Craft Beer Society, these comments and questions from bartenders and barstool neighbors range from laughable to minor annoyances, but they’ve all heard their share, including founder Stacia Sharp, who was asked the fruity beer question. Sharp, a nurse, formed the WCBS in 2020 to bring women who love beer together for what she calls “camaraderie, education, and love of craft beer.”

“I love beer,” Sharp said. It’s a simple statement, but too many men, including bartenders, are surprised by the declaration. “A lot of women love beer, but breweries have always been considered men’s territory—even though the first brewers, historically, were women.”

Sharp reached out to Andrea Potter, a paraprofessional in Mustang Public Schools, to help put the group together. The women had met online in beer-related contexts. “I’ve always been a beer drinker,” Potter, also a homebrewer, said. “For craft beer, though, Anthem was my gateway brewery, and Arjuna was the gateway beer.”

Potter was happy to be involved. Like Sharp, she wanted to get more women involved with beer, both drinking it and visiting taprooms where it’s poured. The first meeting in September 2020 at Angry Scotsman attracted more than 50 women.

“Some were brewers, yes,” Sharp said, “but most were just women who love beer. Men attended, too, whether out of curiosity or because they were there with one of the women. They’re always welcome, because we can’t be inclusive if we exclude men.”

“Those guys are mostly our friends now,” Potter said, laughing. “Many of them are encouraging us and supporting our goals. They’re excited that we love beer, too.”

Rachel Silver was wearing a “Drinkerbell” tee shirt at the Lively event. She’s an accounting-HR professional who was introduced to local beer in 2017 by the late Tom Challis, one of the best ambassadors for local beer Oklahoma City has had.

“I don’t really encounter the misogyny in breweries that I used to find in restaurant bars and clubs,” Silver said. “The breweries are mostly run by families; they’re in the taproom; they have kids, some of whom are in the taproom. It’s a different vibe.”

Silver is a south Jersey native who played basketball at Valdosta State University in Georgia. She met a man there, and moved to Oklahoma City with him. Half a life later—she just turned 50—he’s no longer in the picture, but she’s still here.

“I love the WCBS because we bring women together who love beer,” she said. “Yeah, I had the ‘Are you sure you want a stout? Do you know what that is?’ questions, but I think the breweries are mostly happy to see us. We order IPAs and stouts with getting mansplained now.”

The breweries should be happy. One meeting brings in dozens of women, all of whom order two to three beers. Some buy merchandise, but all post on social media, buy beer to go, tell their friends, and bring women who’ve never been in the brewery (or sometimes any brewery) before. They are an economic force, and their numbers are growing. Several have signed up to become certified beer servers—Silver bartends at Frenzy Brewing in Edmond—and Potter is working on her certification as a cicerone, similar to a sommelier for wine.

“We are involved with charities, too,” Sharp said. “We’ll send volunteers to work events, like the cervical cancer event at Dunlop Codding this October. We raise funds and collect products, like the products for Period OKC to help end period poverty for young women in Oklahoma.”

They are socially engaged, come from all walks of life, are eager for education, and love beer. In short, they are a business owner’s dream come true, especially a brewery owner. They have speakers at every meeting, from microbiologists talking about yeast to brewery owners to homebrewers sharing recipes and processes.

“We’re not afraid to get geeky,” Potter said. “The women are curious; they want to learn about every aspect of the industry. They come in from as far as Fort Gibson, Stillwater, and Chickasha to meet other women who love beer and learn about beer.”

Women have always met other women in the beer scene, if only one or two at a time. The WCBS offers them the chance to accelerate the process, meet a wider range of people, learn more about the beer, and evangelize their friends with the gospel of local beer. Sharp said plans are already in the works for a Tulsa chapter. For more information, click here.