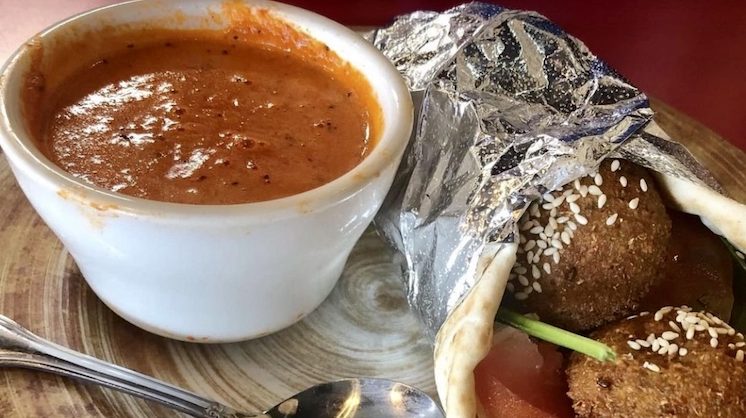 The northern OKC suburb’s food options have improved significantly in the past decade.

Edmond often serves as the punchline to local jokes, and they tend to accept it as good fun. In terms of their food scene, though, very few areas of the city have improved as dramatically as our northern neighbor over the past decade. We all know about Boulevard, Cafe Evoke, Signature Grill and Neighborhood Jam, but Edmond’s international food options have expanded pretty much under the radar, so it’s time that we took the city seriously as a food destination. Here are 10 Edmond Restaurants You Need to Try Now.

Birdie’s Fried Chicken. Chef Kevin Lee’s Korean fried chicken joint is a welcome local addition in an ocean of chains. The fried boneless thighs are the star, but so is the banana pudding dessert. The full bar is excellent and features tons of options from Guthrie-based Wanderfolk Spirits.

Jerusalem Mediterranean Cuisine. The owners take a more comprehensive approach to their Mediterranean menu, including items from the Levant, Greece, Turkey and Iran. It’s the rare place in the metro where you’ll find chicken tawook (Turkish skewers), and the more familiar items like labneh, hummus, fatoosh and kabobs are all excellent.

Lemongrass Modern Thai. This has been a popular spot with Edmondites for years, but it doesn’t get the love it deserves from the rest of the city. The lemongrass chicken fried rice is a house specialty, but the traditional curries and pad thai are equally well done.

Los 3 Tapatios Taqueria. The Mexican (not Tex-Mex) food scene in Edmond has shown remarkable improvement, and this taqueria is one of the reasons. From mulitas to tacos to sopes and tortas, you’ll find delicious, traditional regional Mexican food in the heart of Edmond.

Matachines Authentic Mexican Food. The south Edmond taqueria is a bit of a surprise for people who think all the traditional taquerias are south of NW 10th Street. For the unadventurous eater, they have some Americanized and Tex-Mex items, but the heart of the restaurant is the traditional menu, featuring delicious mulitas, tacos, and breakfast items like huevos con chorizo.

Mt. Everest Cuisines. It’s tucked into a shopping center at E. 2nd Street and Blackwelder Avenue, so you’ll have to look for it, but you’ll be glad you did. The curried goat is exceptional, and is the tamarind chutney. The food includes a mixture of items from the Indian subcontinent, with an emphasis on Nepal. It’s close enough to Indian food that the menu is easy to navigate for most diners.

Pho Bulous. Like tacos and hummus, pho can be found all over the metro now, and this pho joint has been a popular choice with locals since it opened. It’s a no-frills approach to pho, with delicious, flavorful stocks and fresh ingredients.

Simply Falafel. Yes, the falafel is good, as it should be given that it’s in the name, but there is much else to love with this Syrian take on eastern Mediterranean food. The lamb is excellent, as are the kafta, kibbi and dolmas.

Zambrano’s Peruvian Cuisine. Yes, you should have a pisco sour while you’re here, but the food is the real draw. It’s straightforwardly traditional Peruvian cuisine, from the ceviche to the lomo saltado, and it’s excellent. One of the best new additions to the metro, in fact.

Zarate’s Latin & Mexican Grill. The menu here is very eclectic, including items from Mexico, the Caribbean, Venezuela, Peru and Central America, among others. The Puerto Rican food is a nice touch, as it’s difficult to find items like mofongo elsewhere in the metro.