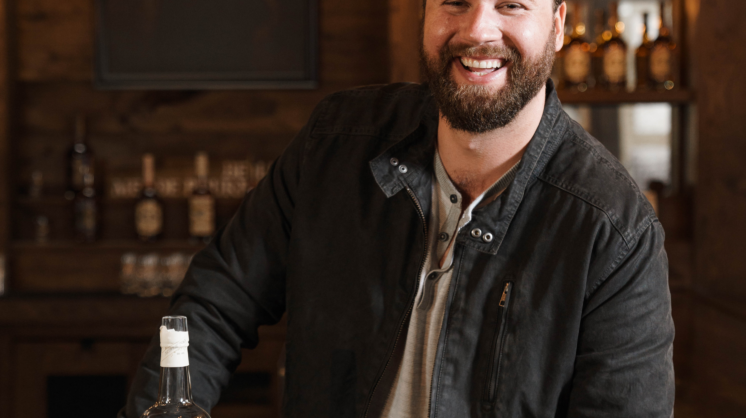 “My triple-great grandfather arrived in the U.S. with only the clothes on his back,” Charlie Nelson said. “On the voyage over, his father fell off the ship and drowned with the family’s gold sewn into his clothes.”

As a storyteller, Charlie Nelson of Nelson’s Green Brier Distillery and Belle Meade Bourbon has three things going for him: he’s a natural, or seems to be; he’s funny; he has a very strong Seth Rogen vibe, which makes his delivery seem even funnier. That he and his family make excellent Bourbon likely doesn’t hurt either.

Nelson “zoomed” into Trapper’s in Oklahoma City in July to launch the Belle Meade Reserve Bourbon, and during the Q&A told the story of guarding NBA star Marc Gasol when both were in high school – a story that ended with Gasol hitting Nelson in the head with a basketball. If prompted, he can deliver story after story, all seemingly true – like the one about his great-great-great grandfather – and all helping focus the listener on the desirability of the Belle Meade brand.

Story is the principle way – outside of quality – that generational spirits like Bourbon and Mezcal distinguish themselves from competitors. Good Bourbon abounds; good storytellers, less so. Nelson agreed to chat with us via Zoom, and he led with the drowned man story.

“He owned a soap and candle factory in Germany, which he sold, and then had the family’s fortune in gold sewn into his clothing, the ship is damaged, starts to sink, but most of the family was rescued by a nearby ship, the Devonshire. The rescue boat capsizes, and that’s how he ended up drowning,” Nelson said.

Charles Nelson, the drowned man’s son, takes over as head of the family when they arrive in New York City. He’s 15 at the time. In 1858, he moves to Nashville and starts a wholesale grocery business. His bestselling products were coffee, meat and whiskey.

“His whiskey was the most popular item because he was one of the first to sell it by the bottle, rather than by the barrel or jug,” Nelson said. “He realizes the demand far exceeds the supply and buys the distillery that’s producing it. He expands it, and it ultimately becomes the biggest distillery in Tennessee and one of the largest in the country.”

In fact, at his peak, Charles Nelson will be selling two million bottles per year at a time when the population of the U.S. is only 68 million. He dies in 1891, and his wife Louisa becomes one of the first women to run a distillery – a fact about which the family is rightly proud.

The success is cut short, though, by Tennessee’s early adoption of Prohibition in 1909. The story would likely have ended there if not for a trip to the butcher in Greenbrier, Tenn., in 2006. At a gas station along the way, brothers Andy and Charlie learn of Charles Nelson’s distillery, and are even shown the old buildings and some of the original bottles from the still-standing operation.

“Every hair on my body stood up when I saw the original bottles with his name on them, and my brother and I looked at each other with a ‘this is what we’re here to do’ realization,” Nelson said.

No one wanted to invest in the brothers’ plan to restart the distillery, so, according to Nelson the family “put up literally everything we owned (mostly our parents’ house) to personally guarantee a loan to get started sourcing barrels from a contract distillery to produce Belle Meade.”

They launched Belle Meade in 2012, and by 2016, the Green Brier Distillery had laid down its first barrels. “Our first full year of tours and tastings, we had 15 or 16 thousand visitors. In 2019, we had 80 thousand visitors, so we’ve grown steadily,” Nelson said.

Prior to going into the booze business, both brothers worked different jobs: Andy was a videographer and Charlie worked in hospitality until he injured his shoulder. At that point, he stumbled onto a gig where he taught Arabic to soldiers. How’d he learn to speak Arabic.

“I sort of taught myself while I was editing audio files.”

Yes, he taught himself Arabic, and he explains it with “I’m sort of good with languages.” Indeed. There’s a longer story about editing the files, memorizing the phrases, and then hanging out with linguists, but basically, the man learned to speak Arabic before launching a Bourbon business.

The story is important to Bourbon, and Nelson thinks it has something to do with the time spent waiting on a barrel to age. “Think about everything that’s happened in the past six to eight years, an this Bourbon kind of represents that, and all the stories that could be told over the course of those years. While waiting for your whiskey to mature, you have to entertain yourselves. It’s such a long slow process, and patience is almost as important as capital when making whiskey, maybe more important.”

The company started just sourcing, but now Belle Meade both sources and contract distills. (Green Brier is not available in Oklahoma. Yet.) The basic Bourbon has about six to eight years in the barrels, and the reserve seven to eleven, making for a darker, more robust flavor profile. Each has its own mash bill as well. Both are widely available in better bottle shops around the metro.