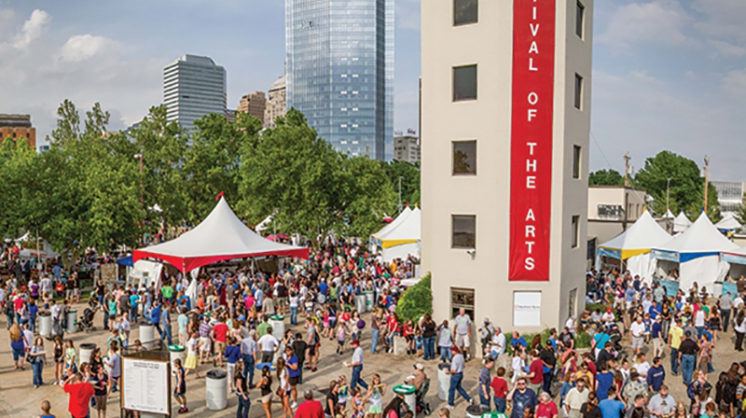 Setting The Clocks Ahead An Hour; Seeing A Robin Hunting Through Green Blades Of Grass; Attending The Festival Of The Arts – These Are The Signs Of Spring In Central Oklahoma.

And as April approaches, ’tis the season for the joyous celebration of creativity that has become such a staple of our calendar: Arts Council Oklahoma City’s 49th festival is free to attend April 21-26.

But reliability isn’t the same as stasis; change is on the horizon both near and far for the event that draws 750,000 guests to relish outstanding examples of visual, culinary and performing arts. As the Arts Council’s Christina Foss says, “Art is ever-changing, and so are we!” On the heels of a massive rebranding effort that has unified the nonprofit’s brand and provided a more consistent visual aspect to promoting its varied civic activities and creative endeavors (Arts Council events range from massive fetes like Opening Night and this month’s festival to the more intimate Storytelling Festival and the daily endeavors of Art Moves), the Festival of the Arts is itself on the verge of relocating, thanks to the ongoing work on the previous site of Stage Center.

This year, the party is still at Reno and Hudson, encompassing work by 200 artists, a cavalcade of international flavors, three stages of entertainment and plenty of treats for kids and adults within the Myriad Gardens. “All the same components are going to be here for the event, but some of them are going to be located in some different areas, so you’ll get to explore the Gardens a little more; you might run across some aspects of the festival you haven’t encountered or noticed before. It’s a nice way, I think, for people to get reacquainted with it.”

In 2016, the Festival will move to Bicentennial Park – Foss says, “It’s going smoothly so far, and the plans look great; it’s really exciting.”