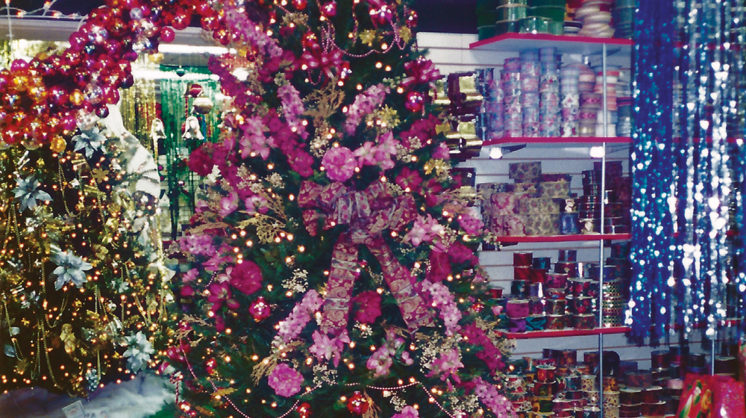 This is the time of year when the sounds of jingle bells fill the air; adults become kids again and kids everywhere marvel at the joy that is Christmas. The mistletoe and holly, the laughter of old friends and a favorite Christmas carol all merge to make the season bright.

A generation of Oklahomans waited eagerly from year to year for Ron Remerowski’s store to come alive with the sights and sounds of the season. Flower City was a favorite destination at NW 50th and May in the Mayfair Shopping Center, and by November the store was a Christmas wonderland.

“Dad worked for a childhood friend’s family florist when he was a teenager in Minnesota,” says Remerowski’s son, Steve. “The company grew and expanded to include silk floral, Christmas décor and later patio furniture. When he was in his late 20s, dad was married with two children, and offered to relocate to Chicago, and then Oklahoma City. The store opened in 1968, and then dad bought it in 1985. It was a huge and scary move for him. My brother and I were high school age at that time, and I worked there since I was 16.”

When his father died, Remerowski said the lease on the Mayfair location was due, and he decided to take a gamble and build a new store. He found some old drawings of things he and his dad had talked about, and he spent a couple of months scouting locations in Oklahoma City.

He says, “I remember sitting in a parking lot watching traffic and thinking, ‘Do I leave the stability of a shopping center to build a free-standing location?’ So at age 30, in homage to my father, I applied for a loan to build what we had discussed so many years earlier when I was stocking shelves. It was my turn to be nervous and scared.”

The new store, known as “Seasonal Living at Flower City,” opened in 1997 at 4101 W Reno. The expanded location gave Remerowski room to sell not only the finest in silk florals, but patio furniture, fountains and, of course, Christmas décor.

“We still have some of the holiday items that are from day one that I will never part with,” he says. “But with the changing world around us, we have changed with the times and are moving toward a more exclusive style of holiday decorations. We will always carry the greatest Christmas trees ever, but will switch our decorating focus to more exclusive one-of-a-kind or limited items. In other words, items that are not mass-produced and are more quality heirloom ornaments that can be passed on.”

A loving tribute to the family’s patriarch is posted at the store’s entrance, called “This is my father’s world.” Today, Remerowski said he is proud to carry on his father’s legacy.

“One of the greatest things is being involved in a community that I’ve grown up in and proud to call home,” he says. “My mother still works with me, and we have a staff that I’ve grown up with over the years. I want to thank Oklahoma City for supporting local businesses like mine, and wish everyone a safe and happy holiday season!”