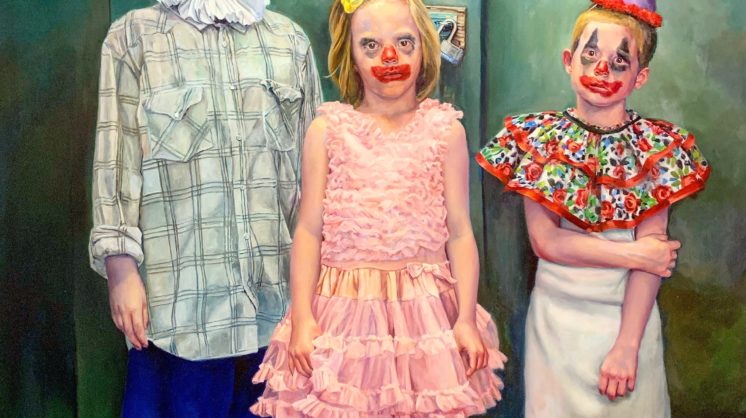 A retrospective featuring the work of Oklahoma artist Jeff Dodd is on display at the Norick Art Center on the campus of Oklahoma City University through February 7. Dodd grew up in Western Oklahoma, the son of a cattle rancher, and while rural themes—including ranching and landscapes—have been the focus throughout much of his career, he is best known in Oklahoma for his two large murals in the Senate and House chambers of the Oklahoma State Capitol building.

The murals drew the attention of Ken Ferguson, chairman of NBC Oklahoma Bank, and an avid art collector. NBC Bank commissions Oklahoma artists to create original pieces that rotate throughout the banks’ branches. “I followed his work after seeing the murals, and always knew he’s a great artist,” Ferguson said. “By the time I saw his show at JRB at the Elms, he’d changed his style quite a bit, which is fine. I’m not sure his early stuff would have worked for a bank.”

That “early stuff” was the explicitly religious and somewhat controversial—by Oklahoma standards—series of paintings that Dodd created after leaving art school in New York City and settling in Santa Fe. Dodd is an evangelical, but his paintings were often too stark for religious sensibilities.

Heather Lunsford, director of the School of Visual Arts at OCU, curated the show, and she chose a few pieces from the religious series to show the quality and depth of Dodd’s work.

“When it’s all said and done, we’re going to look back and see he was one of Oklahoma’s greatest artists—perhaps our best painter, but his work has always been too conservative for some and too liberal for others,” she said. “He’s a hyperrealist at times, and since Jesus was crucified naked, he painted Jesus nude. That’s not for everyone, obviously.”

Nudity abounds in the early series, but it’s realistic, not sexualized, and it’s there to make points about openness and vulnerability. His subjects wear masks; some have their backs to us, but all are mediations on Dodd’s spiritual experience in Santa Fe as a younger artist.

Selling “controversial” art about religion—even art that is a positive commentary on religion—is difficult in Oklahoma, and so Dodd has painted landscapes, ranchers, horses and all the iconography of the West for decades, and while some call his Western-themed paintings masterful and sublime, the force of his personality and the passion of his craft really emerge in those early paintings and when he paints children.

“Dodd married very late, so he never had kids,” Lunsford said. “I was working through his pieces and I kept seeing these stunning paintings of children, so I texted him ‘Why kids?’”

Dodd’s answer, only a word: innocence. He’s a borderline Luddite, and so Lunsford is used to terse text messages. He paints in a barn, cut off from the world.

“Whatever you end up writing, he won’t read,” she said during the interview. “He doesn’t go online, doesn’t read his press, doesn’t really do interviews.”

He will, however, be at OCU Friday night, January 24 for the public opening of the installation from 5-7 p.m. Lunsford has chosen more than a dozen of Dodd’s paintings, arranged by decade and theme to offer this retrospective. She’s put a sign at the entrance to the gallery to warn potential viewers about the nudity and religious themes.

“When I was asking Jeff about painting the piece for the bank, I told him not to get political,” Ferguson said. “It’s Oklahoma, after all. He answered ‘So, nudes are okay?”’ Ferguson laughed. “No!”

Irrespective of the politics or religion of the viewer, what is obvious about Dodd’s work is that he is a painter of extraordinary—Ferguson used the word staggering—talent. His work verges on photorealism, but it’s closer to magical realism, that specifically South American genre of literature where the mundane and magical are interwoven matter-of-factly.

Lunsford has certainly put together an evocative show, and the juxtaposition of religious iconography, prophetic themes, farmers, and wispy, angelic (and a little creepy) children will absolutely create conversations about one of Oklahoma’s great artists.