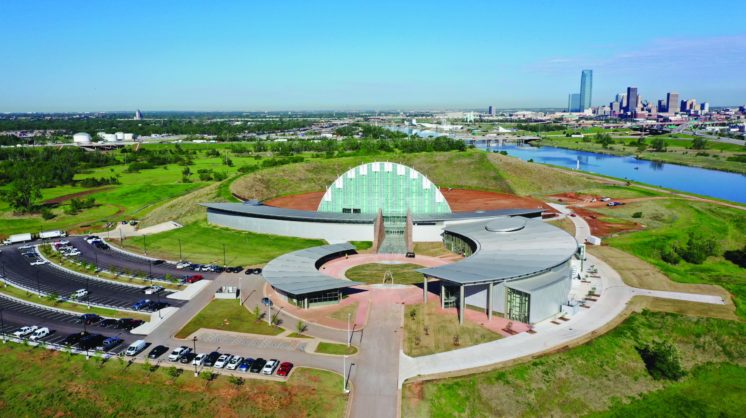 “Through this museum, we carry forward our stories and culture for the benefit of all Americans, today and in the future,” said Chickasaw Nation Gov. Bill Anoatubby.

“Located in the heart of America and in the home of 39 federally recognized tribes, this museum is the perfect place at the perfect time to truly tell our stories with authenticity and respect,” said David Hill, Muscogee Nation principal chief.

The museum is scheduled to open Sept. 18 near Interstates 35 and 40 in Oklahoma City. Senior Curator Heather Ahtone, who is Chickasaw and Choctaw, said all the tribes were consulted for the opening exhibition and will be represented with at least three objects within the 140 borrowed from the Smithsonian’s National Museum of the American Indian.

“We know the community has been waiting on this for a long time,” said Shoshana Wasserman, deputy director of the museum. “This is way more than a job for me. This is our culture. This is my life’s work.”

“We expect the Choctaw people and other Native American tribes to be proud of this must-see destination,” said Choctaw Chief Gary Batton. “This museum is an attraction for the world to see.”

Kelli Mosteller, director of the Citizen Potawatomi Nation Cultural Heritage Center, said the museum “will be a great space for Oklahoma’s non-Native residents and visitors to understand the diversity of Nations and cultures represented in Oklahoma. This is an important story that deserves the dedicated space and expertise that FAM will provide.”

Tribal origin stories will be presented in the Tribal Nations Gallery, with artifacts featured in the Mezzanine Gallery. There’s a 175-seat theater for film screenings and poetry readings, a store with one-of-a-kind gift items, a full-service restaurant and a café.

The museum architecture was designed around the four cardinal directions, said Ginny Underwood, a Comanche Nation member who is the museum’s marketing and communications manager.

The East Gate will align precisely with the sunrise on the vernal and autumnal equinoxes. The Hall of the People, a large glass dome visible from I-40, represents a Wichita grass lodge. An earthen mound pays tribute to the mound-builder civilizations, and the walk to the top of the mound represents life’s journey.

The Trail of Tears and all the journeys that brought Indigenous people to what was then Indian Territory are marked by the Remembrance Gate, said Wasserman, who is from the Thlopthlocco Tribal Town of the Muscogee Nation.

Loretta Oden, who with her son founded the Corn Dance Café in Santa Fe, is the Native foods consultant for the restaurant and coffee shop.

“I’ve been involved with this museum project since they broke ground,” said Oden, who is Citizen Potawatomi. “People are really going to be impressed and amazed at the inside of the museum.”

Oden said her menus will feature dishes representative of the 39 tribes in Oklahoma, including their diets in their original homelands.

“We really were advanced cultures, but people don’t think of it that way,” Oden said. “We had extensive trade routes.”

Store manager Tom Farris, who is Cherokee and Otoe-Missouria, said he expects visitors to be “blown away” by the jewelry, pottery, basketry, beadwork, carved wood and textiles the museum has asked Native artists to create.

“We will have an entire kids’ section in a separate area of the store,” Farris said. “Things made for kids often aren’t culturally correct. We are working with Native authors and presses that carry books that have been vetted.”

Farris has worked for more than 20 years on the business side of art, and is himself an artist.

“I don’t show my art where I work,” he said, “but I’ve always been trying to create a place where I would want to show my work.”

Tribal leaders had for decades talked about the need for an inter-tribal museum, and the state came on board in 1994 with the creation of the Native American Cultural and Educational Authority, which Anoatubby currently chairs. A ground blessing was held in 2005 on property donated by Oklahoma City, and construction got underway near Interstates 35 and 40.

Then came a time of state and federal funding cutbacks, and in 2012, state funding ran out and the property reverted to the city, Wasserman said. A Chickasaw Nation subsidiary asked for the opportunity to develop the land around the museum site, and the sale of the land to the tribe led to a partnership also involving state funds and private money that allowed the museum to be completed.

“This cultural center and museum will serve as a dynamic venue where tribal voices celebrate Native American culture and contributions to our state,” Anoatubby said. “Tribes are an active and stabilizing force in Oklahoma with deep and permanent roots.”

Admission during opening weekend will be $5 and by timed ticket only. On-site parking will not be available on Sept. 18-19. Shuttle service will be offered from parking lots across the metro, with a $5 charge to park and ride.

More information is available on the museum website at famok.org.