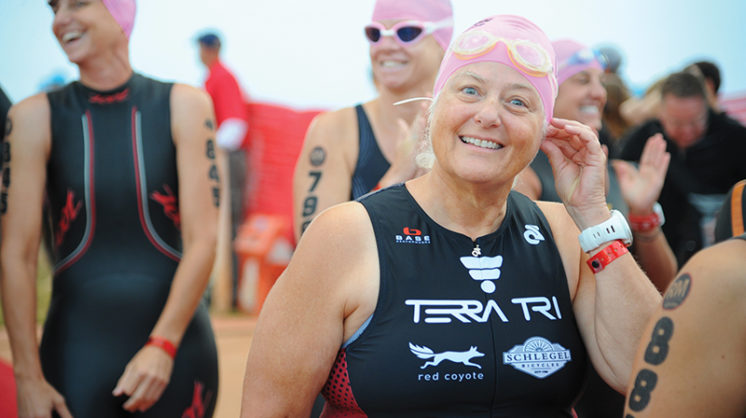 Before any given triathlon event, Oklahoma City native Sandy Kimerer asks herself, “What have I gotten myself into?”

A triathlon “newbie,” Kimerer, 60, will join 1,200 others from 48 countries to participate in the 2016 ITU Long Distance Triathlon World Championships Sept. 24 at Lake Hefner, hosted by Friends of Multi Sport’s Redman Triathlon.

The event is a coup for Oklahoma City’s racing scene. Participation numbers, including spectators and athletes, could reach 20,000 people.

“The feather in the cap for us is that we were chosen over 19 foreign countries,” smiles Redman Triathlon Executive Director David Wood. “The economic impact for Oklahoma City is significant.”

About 350 of the participants, like Kimerer, are Americans. Other large reporting countries include the United Kingdom, Canada, Japan, New Zealand and Australia.

Wood credits climate and the organization’s reputation as reason for the selection by ITU (International Triathlon Union).

“Oklahoma City is a great place but secondly, people love a challenge and what they are going to get here is heat and wind,” Wood explains. “You get a sense of accomplishment when you’re battling a 22-plus mile-an-hour wind in your face with a heat index of 92 degrees. When you’re from Norway, that’s a challenge.”

Redman, now in its 12th year, is one of several endurance events hosted by Friends of Multi Sport, a nonprofit organization committed to athletes and community.

“It’s staged by athletes for athletes, and our focus isn’t about making money,” Wood says. “It’s about supporting athletes, being attentive to their needs and making sure our events are an exceptional experience.”

Last year’s Redman event was designated as the only race qualifying participants for this year’s world championships. Kimerer qualified for Team USA by ranking in the top 25 in her age group.

A CPA and fitness instructor at YMCA Healthy Living Center-Integris, Kimerer, who participated in her first triathlon four years ago, began preparing in January: She started a strength training routine to build her core, shoulders and leg muscles, followed by a 30-week program beginning in March centered on aerobics, increasing speed and improving heart rate.

“Nutrition and diet are huge on race day,” says Redman staff member Cara Nance. “Nerves play a role for these athletes, especially those coming in from other countries who are trying different foods. It’s about how your body processes and hydrates, and even what medical conditions you may have.”

Calorie intake during the triathlon – easiest done while biking – is important, and people try different options and products. Last year, Kimerer cooked and salted fingerling potatoes and stuck them in her jersey pocket for easy retrieval.

Redman is known for its world-class medical facility staffed by an M.D., and aid stations, including bike maintenance areas, are scattered throughout the course.

The race site, base venue and transition area – called Field of Play on the east shores of Lake Hefner – are spectator-friendly. Parking and a trolley service to the event area are expected to be available in the Chase and IBC Bank parking lots at NW 63rd and Portland Avenue. Also available to the public is a children’s activity area – including a 30-foot tiger slide and mini-kids duathlon – and race day food provided by Kellies Kurlies & More.

The race begins at 7:30 a.m. with the swim, considered the most challenging part of the triathlon. The elite runners’ ceremony follows completion of the event Saturday, and the final ceremony for age-groupers is scheduled at 10 a.m. Sunday at the Devon Boathouse.

Updates on parking and general information are available at friendsofmultisport.com/event/world-championship.

This year’s event requires 1,400 volunteers. To volunteer, sign up online at friendsofmultisport.com/event/redman-triathlon/volunteer.