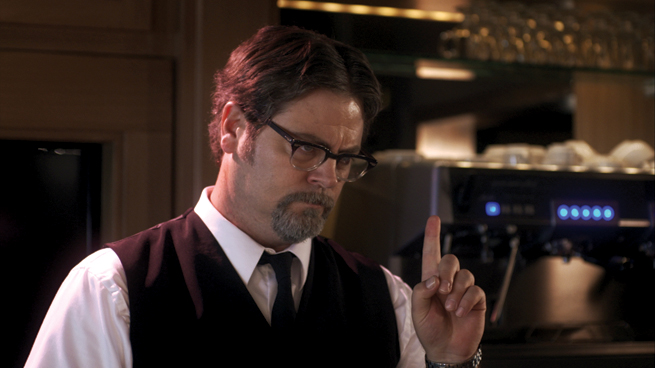 Austin-based writer and director Bob Byington’s new film, “Somebody Up There Likes Me,” is a surreal comedy that Indiewire says “walks a fine line between casual cruelty and the grander schemes of time,” following the character of Max (Keith Poulson) over 35 years as he “keeps bumbling through marriage, money and mortality.”

This biting insight into human nature comes to deadCENTER this month, screening on Thursday, June 7 at 8:30pm at Harkins Theatre in Bricktown. The film also stars Nick Offerman and Jess Weixler, with Oklahoma native Megan Mullally in a supporting role.

Offerman served as a producer on the movie. His onscreen role is as Max’s best friend/only friend Sal, who ages over the course of the film while Max does not. Offerman worked with Byington on two previous films, but is best known to most audiences as Ron Swanson on NBC’s critically acclaimed “Parks and Recreation,” for which he received the Television Critics Association Award for Achievement in Comedy in 2010. He has worked on numerous feature films, alongside such stars as George Clooney, Kevin Spacey, Bruce Willis and Kirsten Dunst, and started his career in the Chicago theater community. When not working in TV or films, he spends time in his woodworking shop, where he handcrafts canoes, tables and other items.

Slice caught up to Nick Offerman on tour to talk about “Somebody Up There Likes Me,” his Oklahoma connections (he is married to Megan Mullally) and a mysterious suitcase that appears throughout his new movie.

How did you become involved in “Somebody Up There Likes Me?” What drew you to this project?
I have known Bob Byington for about 14 years, and I was in his last two features, “RSO” and “Harmony and Me.” I am a big fan of his writing and his sense of humor, not to mention that filming in Austin means lots of barbecue.

Tell me about your character, Sal, in the film.
Sal is a typical modern American to me. He wants to do as little as possible and get paid as much as possible for it. On top of that, he really enjoys cake.

You are listed as a producer on this film. What was it like to function in that role while simultaneously being a part of the cast?
The title of “producer” can mean so many different things on a given production. Our other producer, Hans Graffunder, did all the hard parts. He ran the production office and oversaw the purse strings. I was spoiled because I got to be the creative producer, meaning I was on set for every shot. Sometimes I stood beside the director and looked imperious, sometimes I built a camera cart from a furniture dolly and pushed it around. Producing and acting just meant I was more tired than I would have usually been, but it was double the fun.

What were the most rewarding and challenging aspects of this movie?
The most rewarding part was working alongside our crackerjack crew of about 12-16 folks to create an original work of art that we feel proud of. Exceedingly proud. It reminds me of my days in Chicago theatre, where I worked day and night mounting productions at the Defiant Theatre, productions that would certainly challenge and entertain the audience. Working with a small crew of such quality allows us to really feel like the movie is “ours.” Our fingerprints are undeniably all over it.

The most challenging aspect of the project was refraining from gaining 12 pounds over a five-week shoot. I’m afraid I was not up to the challenge.

Since your marriage to Oklahoma native Megan Mullally, have you spent much time in the state? What is your impression of the still-evolving film industry here?
In my 12 delicious years with Megan, I have logged many trips to Oklahoma, and I must say I have fallen in love with the state, especially Oklahoma City. I love the pace and the kind folks and The Charcoal Oven and The Metro and Johnnie’s and Braum’s and Ludivine and The Boulevard Cafeteria.

Oh, film? I’m a bit ignorant of the film industry in Oklahoma, but I will happily hand my headshot to any takers. I did assay the role of Judd Fry in the 1988 Minooka High School Production of “Oklahoma!” and was reviewed very generously.

You and Megan will be in town for the deadCENTER Film Festival and the screening of “Somebody…”  What else will you be up to while visiting Oklahoma?
We will be visiting Megan’s amazing group of pals that have been friends since they were all six or seven years old, mostly from Casady, hopefully whilst sitting out in front of The Charcoal Oven. If we play our cards right, we’ll be treated to an historical tour of the environs by Megan’s gorgeous mother Martha and her dapper gentleman friend, Mr. Nathaniel Bert Smith.

What other projects do you have on the horizon?
I am hoping to work on a couple of films this summer as well as get in some Minnesota fishing time with my family. I am also finishing up a canoe for my friend Jimmy Diresta in New York, which is very close to being done. It requires only seats and thwarts.

Now, about that suitcase…
The suitcase contains the stuff of life. It holds the secrets of love, American style.