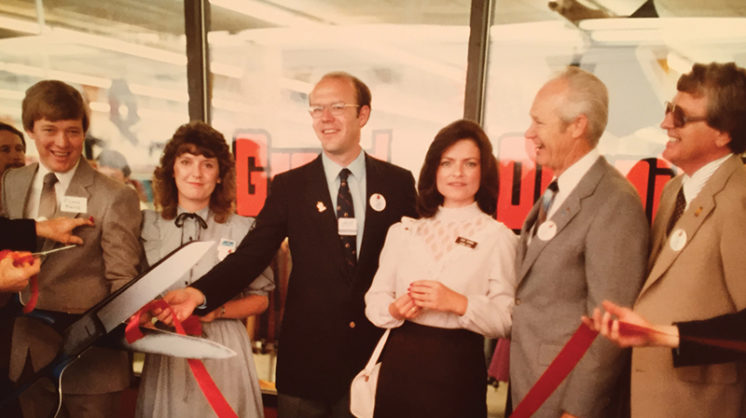 Back in the early part of the 20th century, the “Dixie Store” opened in the small town of Cushing, Oklahoma. Its tiny 25-foot storefront was the beginning of one of Oklahoma’s greatest success stories. Through the decades the company grew and, in the 1970s, the business by then known as “Anthony’s” operated 325 stores in 21 states.

Bob Anthony is the grandson of founder Charles Ross Anthony, or “C.R.” The younger Anthony, who now serves on the Oklahoma Corporation Commission, began working in the family business when he was just a kid.

“At age 10, on Saturday mornings I would go with my dad to the general office in downtown Oklahoma City and work in the mailroom,” Anthony recalls. “Then about once a month, my grandfather would give me a dollar. To a 10-year-old in 1958, that was a lot of money. At age 14, I got to work in the warehouse, where once I struggled for what seemed like a whole week unloading a boxcar and taping up small but heavy crushed and broken boxes of sheets and pillowcases.”

When he learned to drive, Anthony said he finally ventured into his first store as a sales associate.

“The customers did not know my last name was ‘Anthony,’ but the employees did,” he recalls. “That said, I won the hearts of the sales ladies in my first store because I did such a good job cleaning the women’s restroom for them.”

Anthony was living on the family farm just outside Edmond in the early ’70s, and worked at the downtown Edmond store. He said many former customers still fondly remember the old money cups and vacuum tubes they used back in the day.

“(Former First Lady) Laura Bush even mentions those in her memoirs when she tells of shopping with her mother at the Anthony’s store in Midland, Texas,” he says. “Sending the money and sales ticket back to the cashier served the business control purpose of having the math check and money counted twice. I loved and respected the Anthony way of giving customer service, and the founders justifiably had pride in offering many hard-working people an opportunity to earn promotions and build a successful career taking care of customers.”

He also said that usually wherever an Anthony’s store was located, a TG&Y was not far away.

“Mr. Young of TG&Y, Mr. Goldman of Humpty Dumpty grocery stores and Mr. C.R. Anthony got together to establish numerous ‘strip center’ locations,” Anthony says. “They were often on the suburban state highways away from downtown areas. Instead of being competitive, they felt they mutually benefited from each other’s customer traffic.”

After 65 years in business, 98 percent of the shareholders voted to sell the company to Citicorp during the turbulent economy of the post-Penn Square Bank collapse in the early 1980s, Anthony recalled.

“From the customers’ perspective, the greatest differences were felt following Citicorp’s sale of the company to the Stage Stores 10 years later,” he says. “Retail became a consolidated, fast-changing, highly competitive operation requiring new technology, distribution, replenishment and information systems – in short, it was depersonalized.”

Today, discount store self-service is really no service, Anthony asserted, and said he is proud of the family legacy and the commitment they had to their customers.

“My biggest take-away from my years with Anthony’s,” he says, “is what an honor it was to meet people from all walks of life at the front door of a C.R. Anthony store and say, ‘Howdy! Can I help ya?’”