Art on the Airwaves - 405 Magazine 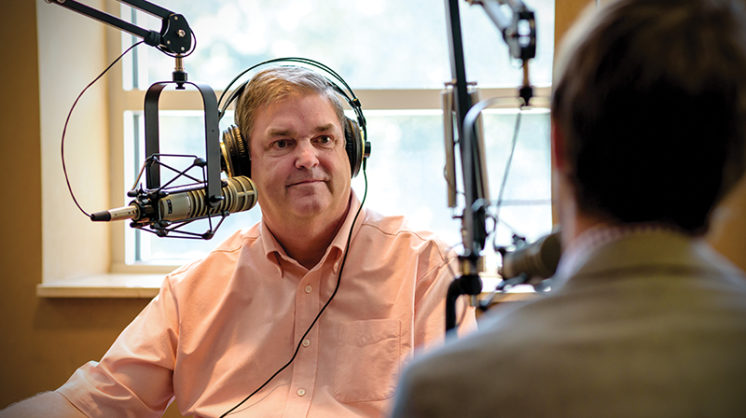 “Art on the radio.” That’s how Brad Ferguson, general manager at KUCO-FM 90.1, tags the classical radio station, which broadcasts from the University of Central Oklahoma and is commemorating its 50th anniversary. Ferguson, a 33-year KUCO veteran, reflected on the station’s beginnings when it was little more than a glorified megaphone using its original call letters, KCSC.

In 1966, Central State College students ran a lone turntable that, combined with a 10-watt transmitter and an antenna on top of a classroom building, broadcast a little classical, some middle-of-the-road pop and CSC football games. By 1969, the station increased its signal to 30 watts, its reach dependent on weather and vibrating walls caused by students exiting classes. A decade later, a $100,000 grant resulted in a signal boost to 100,000 watts. Today, the station is considered by many to be one of the top classical public radio stations in the country.

“We are the only station that does what we do in Oklahoma,” Ferguson says, “and nationally, few stations in the country still have local announcers who bring you the variety of classical programming we do.

“It’s like having a good museum or theater,” he adds. “All music is entertainment, but classical music is high art, a manipulation of themes and layers … it’s mathematical, yet emotional.”

Ferguson arrived in 1983, a pivotal time for university-licensed radio stations. NPR programming and the new public radio model were the trend. Students were replaced by professionals, and the Corporation for Public Broadcasting and annual on-air fund drives became major revenue sources.

Brad Ferguson, general manager of KUCO 90.1 FM, interviews Clint Rohr, director of the University of Central Oklahoma Jazz Lab. The show, “Spotlight on the Arts,” airs from the second floor of the Oklahoma City Museum of Art.

The state’s other four public radio stations aired the standard NPR model: music and news. To prevent duplication, Ferguson and KGOU manager Karen Holp agreed one station would take on all classical, the other news.

“We experimented with some NPR shows, but it didn’t last,” Ferguson recalls. “Our listeners didn’t like it. We’ve always been about the music.”

Kimberly Powell, the most recent recipient of KUCO’s three Governor’s Arts Awards to date, produces and hosts “Performance Oklahoma,” a weekly showcase of classical concerts performed by arts organizations such as the OKC Philharmonic, Armstrong Auditorium and Canterbury Voices.

Despite the professional operation – which includes business manager April Rutledge, nightly host Ralph Wise and opera host Lane Whitesell – and an outpouring of music from a 14,000-disc library, the station’s digs are tiny: The broadcast studio and offices in UCO’s Communications Building total 1,200 square feet, according to Ferguson.

“We are in a shoebox operating on a shoestring budget,” he says. “We are not sitting around in elegant chairs under chandeliers.”

“People know us, and it speaks well of a community to support its classical music station,” Ferguson says. “If we can enrich the lives of our listeners, we have succeeded. For us, it’s a cause.”

► The Show Must Go On

“Anybody who’s anybody comes on this show,” Carpenter Square Theatre’s Artistic Director Rhonda Clark said during her last guest appearance on KUCO’s “Spotlight on the Arts.”

Arts representatives in the metro area will be happy to hear the hour-long interview program has returned to the Oklahoma City Museum of Art after a three-year hiatus due to mechanical problems.

General manager and host Brad Ferguson happily explains, “We got a nice new hand-built console, plus three microphones for times we have multiple guests talking about one event or show.”

The museum’s late executive director Carolyn Hill, a classical music enthusiast and friend to the station, invited Ferguson to move the show to the museum when it moved to its downtown location in 2002. The arts community enjoys the location because of proximity to their offices.

“The show brings a lot of collaboration, because people in the arts community who don’t have time to see each other get to catch up,” Ferguson says. “One year, we had guests from Canterbury, the Philharmonic and the [OKC] Ballet, and before the hour was over they decided to do ‘Carmina Burana’ together.”

To inquire about becoming a guest on “Spotlight,” email Brad Ferguson at bferguson@uco.edu.