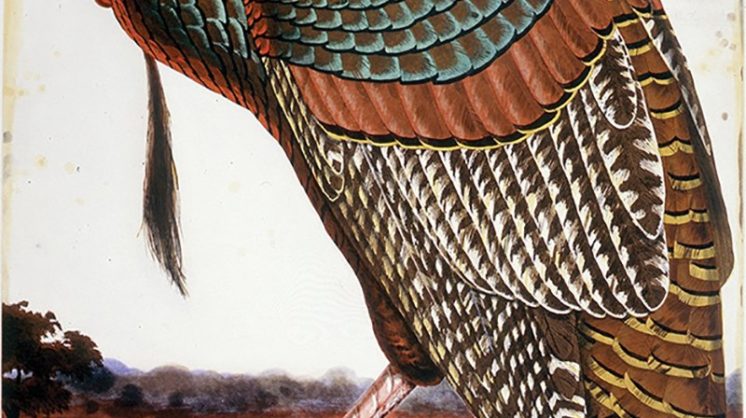 Walton Ford, “Benjamin’s Emblem,” a reference to Ben Franklin’s preference of the turkey as the national bird. Courtesy the artist and Paul Kasmin Gallery.

At The Sam Noble Museum This Month, “Bird” Is The Word.

A traveling exhibition of ornithological excellence is alighting there, and it centers on the man whose name is still synonymous with the artistic depiction of avians over a century and a half after his death: “Audubon and the Art of Birds” should be a true pleasure to observe.

John James Audubon wasn’t the first to take up a brush or pen and try to depict the swift, colorful, marvelously varied winged denizens of nature, nor the first to attempt a comprehensive catalog thereof – but he brought a zest to the practice that had been missing for centuries. Jen Tregarthen, public relations officer at Sam Noble, explains that, “He did something that artists of that time had never really done: he was capturing the birds in flight, essentially; the birds as they were living and breathing. A lot of the artists of the time had used taxidermy – obviously lifeless animals – to do their paintings.”

Indeed, Audubon himself bemoaned his early inability to imbue his drawings of carcasses with a visual vitality. “How sorely disappointed did I feel for many years,” he wrote. “My pencil gave birth to a family of cripples.” Given that he was operating in the early 1800s and therefore had no camera, no means of working from life except to observe it firsthand, he began watching his subjects in nature and sketching their movements and postures for later refinement.

The results were outstanding. Where the accepted style at the time was to depict a bird in rigid profile, Audubon’s creations began swooping and preening, seemingly frozen mid-squawk or caught in the act of pouncing on prey.

“It is very vivid, it’s very detailed,” Tregarthen says. “His work is so unique, especially for his time. He was able to capture them down to the feathers; the birds actually engaging in what they would do in a natural habitat, feeding, cleaning themselves.

Audubon was concerned with more than merely aesthetics in painting his fine feathered portraits – he spent considerable time observing specimens and ensuring he was rendering details as faithfully as possible. This flamingo portrait also shows detailed sketches for reference of the bird’s bill and feet. // John James Audubon, “American Flamingo,” courtesy Bell Museum of Natural History.

“His goal, and how he convinced supporters to fund him, was that he was going to paint the birds of America, every single one of them. He wasn’t the first person to want to paint birds in North America, but he did paint nearly half of North America’s birds. I think what’s really exciting about this exhibit is that there will be parts of the ‘Birds of America’ on display. That is a very rare collection; there aren’t very many still around.”

Audubon’s magnum opus took over a decade to create, and contained over 400 species depicted in “double-elephant” prints (a term referring not to pachyderms, but to the size of the sheets of paper, 30 inches by 40). He was determined to portray each fowl at life size, which in some cases like herons, cranes and flamingos necessitated sinuous contortions. Tregarthen isn’t overstating its rarity, either: only 120 copies of the first edition are known to exist.

“There will be about 35 of Audubon’s works, and then about 70 from other artists. [By the way, that roster includes a piece Tregarthen particularly enjoys, by Queen Elizabeth II.] Through this exhibit, you’ll see art on birds from the Renaissance, the 1500s, all the way through the present day; there’s going to be some art from hundreds of years ago, and you’ll be able to see how it’s evolved, especially how Audubon sparked an evolution in this kind of painting.”

Credit where it’s due: this exhibition was developed by the Bell Museum of Natural History at the University of Minnesota, and comes to Norman as a result of the generous support provided by Love’s Travel Stops and Country Stores.

Tregarthen continues, “We have a very popular, very extensive bird collection ourselves, and a lot of experts on hand here at the museum. We thought it would be a nice tie-in with our scientists here to put on this exhibit. Plus, Norman and Oklahomans love birds. We have a big community of bird watchers and enthusiasts, artists – I think it’s a great fit.” She also mentions that “The museum is a really great spot to do bird watching as well; it’s a nice area, both inside and out, to enjoy nature.” For the next few months, that’s more true than ever.

“Audubon and the Art of Birds” will be on display May 15-July 26 at the Sam Noble Museum, which is open daily: Monday-Saturday 10 a.m.-5 p.m., Sunday 1-5 p.m. The museum is located on the south end of the University of Oklahoma campus at 2401 Chautauqua Avenue. For more information, call 325.4712 or visit snomnh.ou.edu.