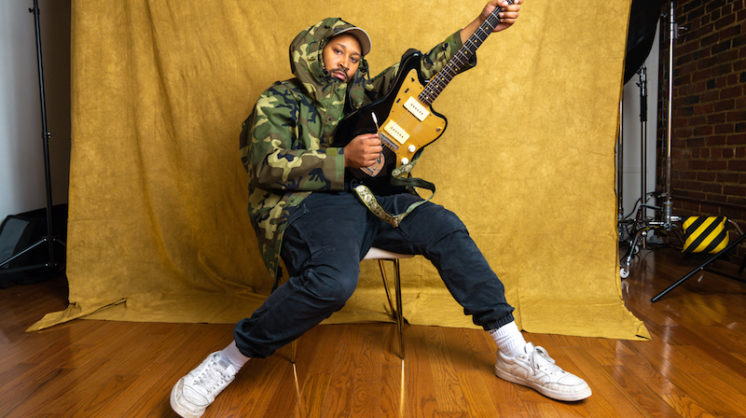 The Mustang-raised indie rock musician comes back for his first headlining show in the Sooner State on December 16.

The energy of Bartees Strange seems boundless. It’s apparent when hearing “Heavy Heart,” the lead-off track to Strange’s acclaimed sophomore album, Farm to Table. A quiet tangle of guitars gives into a seismic rush of drums and horns that underscore the artist’s forward momentum. His unstoppable inertia is also apparent knowing his journey from college football player to FCC staffer to nonprofit worker to ascendant indie rock star. In every area of interest, Strange has pushed with determined ambition, which he attributes to his time in Oklahoma.

“Being from Oklahoma, you kind of have a chip on your shoulder,” he said. “Coming to the East Coast and making music, I was like, ‘I know how to work hard. I may not be the smartest person here but I’ll outwork anyone here.'”

The 33-year-old D.C.-based musician first garnered national attention with his 2020 EP, Say Goodbye to Pretty Boy, a creative and meaningful reimagining of songs by The National. He quickly followed it up with his debut album, Live Forever, which established him as a bona fide genre-breaker whose dynamic songwriting deftly melds alternative, hip-hop, punk, emo and folk — many of those influences he acquired in Mustang as a kid.

Strange’s mom, a classically trained opera singer who taught at OU, would drop him off at CBR Music Store in Yukon, where he’d spend the day playing guitar with older musicians who’d tell him stories about traveling on the road with big acts. “I grew up on Garth Brooks Boulevard,” Strange said. “I grew up playing country music, learning licks off the radio, seeing my friends play, and eventually going to college and meeting people like Samantha Crain and John Moreland.”

But he also found it difficult growing up Black in a predominately white town. “Being Black in Oklahoma, especially in a rural area — it’s challenging.” He explores his conflicted relationship with the state throughout Farm to Table. “Black Gold” recounts his decision to move from Oklahoma to the coasts, both lamenting those he left behind and taking solace that he made the right choice for himself.

“I always hope that I’m like a beacon of hope for people that felt like I felt growing up in Oklahoma, feeling kind of alone in life and a little afraid,” Strange said.

In May 2022, after landing on year-end lists, performing on late-night shows and meeting some of his biggest musical idols, Strange played in Oklahoma for the first time since his move, opening for a sold-out show at Tower Theatre with Car Seat Headrest. The crowd cheered as he introduced himself and then swiftly transitioned to the barreling song “Mustang”, named after his hometown.

On Dec. 16, Bartees Strange returns as a headliner at Beer City Music Hall, accompanied by indie acts Pom Pom Squad and They Hate Change. “It’s cool to come back this way,” he said. “Hopefully it’ll be a special night.”

How do you feel growing up in Oklahoma has shaped your life?

As a young person, all I could think about was leaving Oklahoma. And then, when I left and started working and life went on, I realized all the things that made me who I am are because I grew up in Oklahoma. Those core things that I learned in Oklahoma … made me different than people out on the East Coast and helped me stand out and gave me a perspective that people in my professional and musical lives didn’t have. So even though I have a complicated past with it, I remember the good times now more than anything. I’m so grateful for the friends and family and relationships I have there, and it means a lot to be able to come back and play a show for them.

Many of your songs have a remarkable momentum that you’re able to build up, slow down and stop altogether. How does this come up in your songwriting?

It kind of goes back to seeing what the song wants. I also like showing that I have control over the song. Songs like “Mulholland Dr.”, for example, feel like the fun is building towards something, but then I never really let it climax or get to the big part. I’m bringing it back down, and the whole point of that song is a commentary on the dissatisfaction of utopia. Every song kind of calls for something else, but I do use form as a way to get the idea across.

Your song “Cosigns” celebrates your successes in music but ends on a powerful and somewhat anxious note about drive and satisfaction. Do you worry about burnout?

I think about it a lot because I love this so much that I don’t want to burn out. It’s like a new skill I’m trying to learn, how to sustainably do this and not just throw everything at it. Saving some of myself for other parts of my life. When you’re touring a lot, it’s hard. But I feel like I’m being intentional about it: I’m booking vacations, I’m taking time off, I’m not working on music on the ten days I’m off (from tour), I’m going to do some family stuff. That’s the best I can do right now.