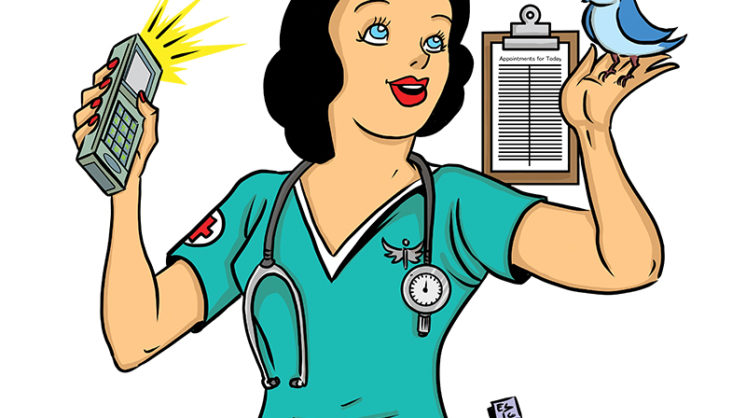 There was a time – never mind how long ago – that I could catch the eye of the occasional gentleman. Despite my fairly average appearance, I’ve often appreciated the friendly nod of the driver in the next lane at a red light, even during “the minivan years.”

I was preoccupied by these thoughts a couple of weeks ago on my way to a doctor’s appointment when it occurred to me that most of the sands of time have slipped to the lower half of my hourglass. And while that may reduce the odds of a love connection with Jude Law at 33rd and Broadway, it means that I have become catnip to the medical professional; I’m at the perfect, fragile age at which doctors can warn me I should “do something now,” and I’ll believe them. Sign me up.

By the time I finished the doctor’s appointment, I had four more appointments lined up before checkout. I’m not sure whether there’s an age connection to this or I just exude a rare enthusiasm during my visits to the doctor, but for me, the concept of an “annual visit” used to mean a simple “one-and-done” doctor’s appointment. Now, the annual visit is more of an all-out kickoff party to an entire season of exams and procedures, accompanied by a good measure of lab work to set the mood.

Last month, after making a rather generous blood donation for said lab work, I got a message to call a doctor’s office, presumably to hear about the results. The voice on the recording dripped with honey and sounded exactly like Snow White. Finding an odd comfort in the melody of Snow’s voice, I called her back immediately.

Our conversation began as a sparkly, cheery exchange that painted a mental picture of Snow at her computer, typing with one hand as a bluebird perched on the other. Within seconds of verifying my birthdate, I sensed a shift in energy. Once I realized this conversation wasn’t even remotely connected to my lab results, the rest of the conversation went south. Way on south.

Snow was, in fact, a scheduling nurse for a proctologist. Faster than I could cross my legs, she launched into her spiel about booking my colonoscopy.
There was no turning back! I had participated in my own undoing. My attempts to feign static from a poor AT&T connection were wasted on Snow, forcing me to turn to my only defense: surliness.

“You know, if you’d said the word ‘colonoscopy’ in the message you left for me, I might not have been so snappy about calling you back,” I said accusingly to Snow.

She mustered a tone that suggested she might have been amused if she hadn’t heard that line a thousand times before. “It’s a tactic,” she giggled.

Apart from duping me into Hell’s waiting room, Snow was all business about my colon health. Point by point, she covered all the flavors of the napalm shakes I’d need to choke down during the days leading up to the appointment. I tried to negotiate my way out of the pre-cleanse ritual, citing vague religious reasons that I thought could get me a pass. Snow didn’t care. She showed even less interest in my tale (tail) of turbulent woe from my first ride on the pommel horse many moons ago. (Ass jokes – get your ass jokes here.)

I wouldn’t be surprised to find out that Snow works on commission for a proctology conglomerate as one of a thousand Time-Life-Operator types, packed into a crowded call center where she, Cinderella and Sleeping Beauty get to ring some kind of victory bell for every 100 appointments scored.

In defeat, I got Snow closer to the victory bell.

“Juuuuuuuune,” I sighed, knowing that the perfect, carefree month of blissful summer joys would now be tainted by dread. “Okay – does any particular day work better for you?” Snow chirped.

Why, yes, I replied … the day of the full moon.