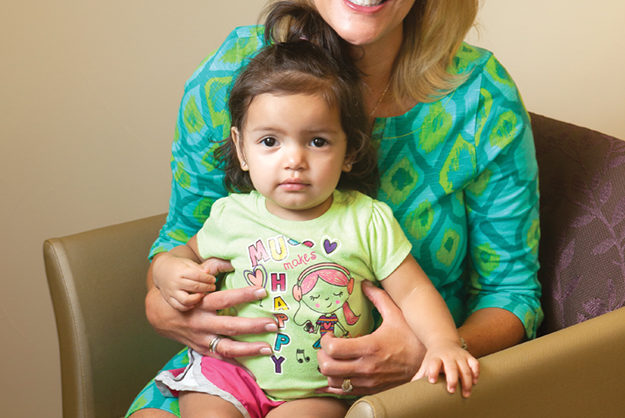 A Conversation with Miki Farris

Those Who Know Miki Farris make an immediate association with Infant Crisis Services, where Farris has spent the better part of three decades providing much more than baby formula, food and diapers for Oklahoma City’s smallest in need – holding, rocking and loving babies are a bright part of Farris’ days at the office, too.

During the past year, while the nonprofit’s co-founder has worked to bring balance to her busy life – cooking in Julia Child’s Provence kitchen, preparing to launch a new program for the babies and attending a hula-hooping class – she has garnered recognition from a national publication as one of five women in the United States who still find time to make a difference in the lives of many who will probably never even know her name.

What’s your hometown? I’ve lived in Oklahoma City the longest, so I call it my hometown.

How long have you been working for Infant Crisis Services? My entire adult life! Twenty-nine years.

You’re one of the co-founders, right? How did ICS come into being? Yes – it began as a project in a Sunday school class I was in. We’ll be celebrating our 30th anniversary next year.

What’s the best part of that job? The babies! Holding, rocking, burping and loving them. I can’t imagine a better job for me. I feel fortunate to have an opportunity to make things better for someone else.

I understand that you’ve been recognized for your work with ICS in a big way. Yes – I have been selected for “The Classic Woman Awards” by Traditional Home magazine, which recognizes five women in the country every year who have made a difference in their communities.

Congratulations! That’s a big honor! Thank you. I do feel very honored and excited. We’ll be recognized at an awards reception in New York City in September, and the article will appear in Traditional Home’s October issue.

Which character trait is one of your best? I think I have a good heart.

Which trait would you gladly give up? People pleasing, which I think is a by-product of having a good heart!

What’s the last book you read? “Self Talk, Soul Talk” by Jennifer Rothschild.

Where should I eat this weekend? Signature Grill in Edmond at Danforth and Kelley. It’s excellent.

What should people learn to do? To be kind and treat others the way they want to be treated.

What is the toughest job worth doing? Raising kids.

What advice has inspired you? There are two quotes by Mother Teresa that come to mind: “Not all of us can do great things. But we can do small things with great love,” and “We ourselves feel that what we are doing is just a drop in the ocean. But the ocean would be less because of that missing drop.”

What are you currently obsessed with? Hula-hooping!

Wow – no one has ever given me that answer to that question. What the heck? It’s great exercise – you have to get a weighted hoop – but I’ve even been to a few hula-hoop classes.

They have hula-hoop classes? Yes! There’s one here in town, but my daughter in California says they’re everywhere out there.

What should everyone try or experience at least once in their lifetime?  Vacationing in France.

Do you have a favorite destination in France? My husband Jim and I go to a cooking school in Provence that takes place in the kitchen of Julia Child’s home. We’ve gone for so many years, we’ve become friends with the woman who owns it. One year, she wanted to give me a gift, so she gave me a butter dish that had belonged to Julia. It’s one of my favorite possessions.

What are you most grateful for? My family.

What is the one thing you’ll accomplish by the end of the year? Two things: becoming a person who wants to exercise and getting my life in balance.

What was your best subject in school? All of them. Well, all of the ones that had nothing to do with math or science. I was a communications major at OSU.

What’s not all it’s cracked up to be? Aging!

What’s the last thing you lost? My keys. I lose them daily. In fact, they’re probably lost right now.

What’s on the horizon for ICS? We’ll be launching a pilot program October 1. It involves a new mobile unit that will go out to about 10 sites to deliver necessities for babies. We’re very excited!