Building on a Concept - 405 Magazine 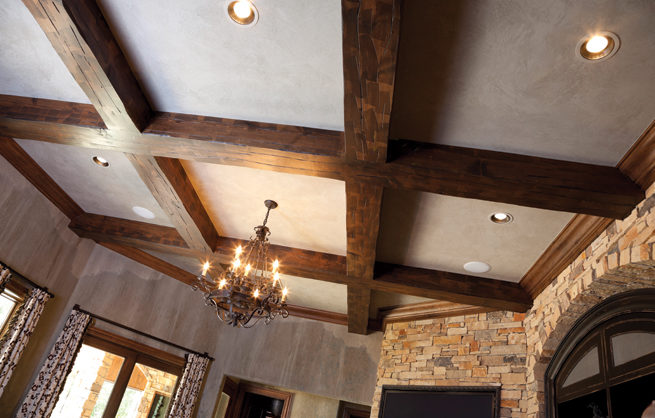 Homebuilders and craftsmen, like professionals in any field, seek opportunities to create something of lasting value. It is a desire to contribute, to be a part of a project that will endure. And in the business of homebuilding, the projects are real, tangible objects that provide spaces for real families – often for many generations.

Still, there is also the lure of a good challenge and the chance to participate in projects that go above and beyond the average home. When the opportunity to work on a “concept home” arises, the builder knows it will be a challenge, but at the same time a true showcase. It is a time to shine.

Each year the News 9 Concept Home features a domicile spotlighting the latest trends in design and construction, while raising funds for a metro area nonprofit agency. This year the designated recipient was Variety Care, and for several weeks in August, Oklahomans were able to tour not one, but two new homes displaying the work of local builders and craftsmen.
Wayne Griffiths, builder of one of this year’s Concept Homes, considers it an honor to participate in something that shows his work and benefits a great cause. “Contributing to that is a good feeling, and we get to meet a lot of good people,” he says.

Of course, any good homebuilder knows that the quality of the home is only as good as the quality of the people who do the work. Both of the 2012 News 9 Concept Homes feature outstanding touches by a wide array of talented local professionals in a variety of disciplines. From trim carpenters to metalsmiths, roofers to painters, these craftsmen represent the best Oklahoma has to offer. It goes without saying that they reap professional benefits from being associated with such a project. But a more subtle note is the personal pride each brings to his work. It is an honor to be chosen – it is a higher honor to do the job well.

Design Oklahoma caught up with two of this year’s craftsmen on the job to gain some insights into the process, and the experience of working on these projects.

This housing development represents the trend of “smaller but nicer,” according to builder Mark Gautreaux. It is a high-end home concept, in what Gautreaux calls a “manageable size.” At 3,200 square feet, this home features an open, spacious living area on the main level, and 18-foot ceilings. Beam and ceiling detail in the kitchen and living area are of exceptional quality, thanks in part to the exacting eye of painter Benjamin Cuellar.

With 15 years of experience, Cuellar began in the painting business by working for his uncle, and now runs his own crew of three. The distinctive kitchen ceiling in this home is made of pecan wood, and it called for a special finish.

Cuellar used three different glazes on this ceiling to achieve the desired look. He began with white as a base, then added raw umber. For the third coat, he mixed the first two in order to strike a delicate balance and achieve the final color. It is a success – the kitchen ceiling is one of the most impressively unique elements of the home.

The cedar beams in the great room give the distressed look that has become so popular in home design. The stain on the beams complements the walls, a thoughtful color with the whimsical name of “Agreeable Gray.” When asked if the beams presented any special challenges, Cuellar gives a modest smile and a shrug and says, “A few.”

Cuellar has an eloquently simple take on his participation in the Concept Home: “It feels good,” he says. “I am proud of our work.”

In contrast to the Abbey at Fairview Farm home, this Stonemill home is designed for a growing family – in this case, a husband and wife and their three young daughters. Built by Wayne Griffiths Homes, it is 7,000 square feet with five bedrooms, two studies, an exercise room, movie room, butler’s pantry and laundry rooms on both levels.

For some of the most nuanced finesse work in this home, Griffiths turned to Mike Taylor and his crew from Sooner Cabinet and Trim. That finesse and expertise is most evident in the home’s front doors. Griffiths found the doors, which are more than a century old and from Europe.

“One of the trickiest things for a trim carpenter is when someone comes dragging in a couple of 130-year-old doors,” Griffiths observes wryly. “It’s a challenge, and a lot of trim carpenters won’t even touch it.”

“It takes what it takes,” Taylor says. “We work at it until we get it right.”

In this case, getting it right meant essentially disassembling the reclaimed doors, then putting them back together again. The back sides of the doors had no detail, and Taylor added a design that would complement the original carvings on the front. He used African mahogany for the back, as it closely matched the grain of the original. The doors then had to be fit into the space, with modern weatherproofing added. The results are stunning: the doors are a fine introduction to the home.

Taylor worked on many other areas of the Stonemill home, including distressed pine beams in the family room and master bedroom. One of the biggest challenges? Working around the 500-pound chandelier in the master.

He built a pair of back-to-back bookcases in an upstairs room – bookcases that double as a hidden doorway to an interior balcony. Taylor and his crew also created all the home’s stairs.

Taylor has been plying his trade as a trim carpenter since the mid-1970s. “This is about all I’ve done, all my life,” he says.

That lifetime of experience shows, as does Taylor’s pride in those who work for him. “You’re only as good as your crew.”