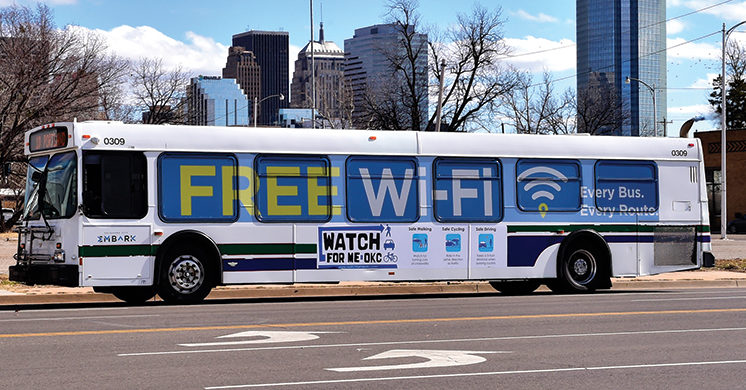 Reggie Wilpon boarded the No. 22 bus at the corner of Martin Luther King Jr. Avenue and 23rd Street. Destination unknown.

Wilpon said he would be searching for a job on this unseasonably warm winter’s day, but didn’t have a detailed plan. He mentioned a friend he will see downtown who might have a lead on a sprinkler installation gig that could turn into a permanent position, but over the last several months, he’s heard of plenty of leads that failed to materialize.

Embark, Oklahoma City’s public transportation system, serves a diverse group of riders, or “customers” as Embark officials prefer to call them. But Wilpon’s status as an unemployed resident boarding in one of the city’s poorest neighborhoods fits with the system’s current status as a service used mostly by the city’s most vulnerable and impoverished citizens.

In a city that champions plentiful jobs and high access to automobile ownership, the rider demographics of Embark showcase an alternative Oklahoma City that can be easy to overlook. According to a 2014 survey conducted in partnership with the University of Oklahoma Health Science Center, nearly 55 percent of riders have an annual household income of less than $10,000, a shockingly low level that had even some Embark officials initially wondering if the survey methodology had some sort of discrepancy.

The same survey also showed that 87 percent of riders have a household income of less than $30,000. Fifty-five percent of riders said public transit is their only option for travel, and 77 percent said they have no access to an automobile.

“We provide an important and critical service for a specific part of our community,” says Jason Ferbrache, director of the City of Oklahoma City’s Public Transportation and Parking Department. “But we also want to be an option for all people.”

Choice Riders Without a car of his own or the income to regularly use a taxi or rideshare service, Wilpon is dependent on the bus, as are most of Embark’s riders, according to the survey. More than 90 percent of riders said the bus is either their only option, their cheapest option or the most convenient way to get around town.

While Embark seeks to constantly improve the service for the riders who depend on it for travel, there is an effort as well to attract “choice riders,” or those citizens who don’t have to ride the bus.

“There is a strategic effort to attract new people to transit,” Ferbrache says. “When we think of choice riders, it’s not based on income, but it’s people who have a car and normally drive a car. For us, it’s about asking, ‘How can we get them to ride the bus?’”

Over the past few years, Embark has undergone a complete rebranding that sought to embrace a more modern name and color scheme. Buses also have been equipped with free Wi-Fi and other trip-planning tools that can be used on mobile devices. While these enhancements can benefit dependent riders, Ferbrache hopes these improvements to the system will draw the attention of the city’s choice riders.

“Some of the things we have done, like free Wi-Fi, we see those as wins no matter what,” Ferbrache says. “It helps our current customer base, and it makes it better for them, but hopefully it’s the extra thing that can get people who have never ridden public transit before to give it a try. We keep all customers, current and future, in mind when we develop and try to grow the system.”

It’s nothing new for non-riders to have a stigma about bus travel, as cities across the nation are increasingly seeking ways to attract choice riders who may have a negative impression of public transit. One of the more popular steps is to increase rail-based service, such as a streetcar line like the one expected to open in Oklahoma City in 2018.

In an article for The Atlantic titled “Race, Class and the Stigma of Riding the Bus in America,” Amanda Hess presented studies that showed affluent commuters are more likely to ride rail-based transit than buses, even if buses provide quicker and more efficient service.

John Johnson, executive director of the Association of Central Oklahoma Governments – the agency helping to create a regional transit system for the metro – acknowledged that the addition of commuter rail and streetcars can be more attractive for choice and affluent riders. But he also believes having a strong bus system will be important to commuter rail and streetcar success.

“I think [transit systems] have to be very holistic, and I think we can’t just think about the sexy sizzle of rail and just appealing to that group,” Johnson says. “Because once you get off [the commuter rail] at the Santa Fe transit hub [in downtown], how are you going to get to your final destination?”

Ferbrache also acknowledges some non-transit riders might give Embark a shot once the new streetcar system opens.

“I think that will put us in front of a new customer base,” Ferbrache says. “But I also hope those new riders will then start to wonder where else they can get on public transit. Maybe they start riding the streetcar and enjoy it, and then consider taking a bus to another destination.”

Factor in the addition of on-board Wi-Fi and increases in frequency of routes by 30 percent over the last two years, and it could be fair to say that public transit in Oklahoma City is undergoing a level of momentum not seen since the interurban trolleys were dismantled in the 1950s.

“We’ve seen our average frequency times over the past few years go from 53 [minutes] to 42 minutes to less than 37 minutes,” Ferbrache says. “We’ve also almost doubled the amount of bus shelters over the last two years. We do feel compelled to point out some of the progress we are making, but we’re the first to admit we have a long way to go.”

Ferbrache said the new streetcar line would be a great addition to Embark, and his office is also exploring additional expansions, such as bus rapid transit along Northwest Expressway. He also hopes to work closer with the region’s largest employers in an effort to introduce employees to public transit and the improvements being made.

But customer service remains a high priority for the Embark team, especially considering the vital service provided to many in Oklahoma City who literally would be stranded without local bus service.

“We always talk about focusing [on a rider] as an individual who is paying a fare and should get top quality service,” says Michael Scroggins, Embark’s marketing and public information manager.

As Embark continues to expand, with current support from city leaders who have approved transit budget increases in recent years, there is a goal to create a public transportation system that works for all types of people.

“We are not naive, we know we are not the choice for everyone, and that’s okay,” Scroggins says. “But we want to show that there are options. We just want to provide enough options, and we want to create supporters, whether you use it or not.”