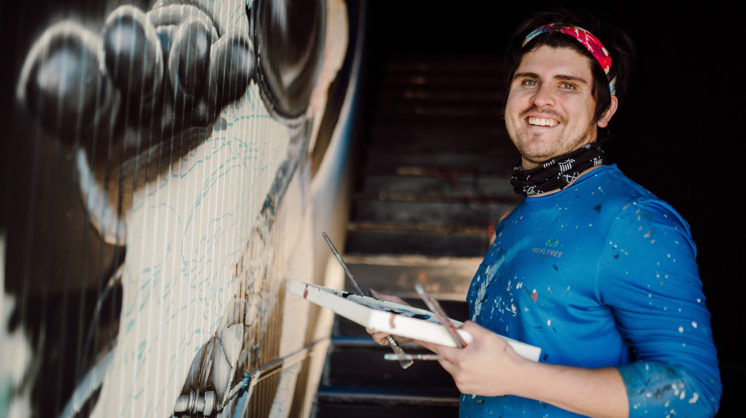 Carlos Barboza’s family moved to El Reno from Costa Rica when he was 10 years old. He’s lived about two-thirds of his life in Oklahoma now, most of it in Yukon.

“The initial move was a crazy cultural shift,” Barboza says, “but Oklahoma has been home ever since, except for a short three- to four-year stint in California.”

Barboza works on a large, colorful scale. If you haven’t seen one of his murals yet, you will soon enough, because he’s busy.

“Being a professional artist wasn’t realistic for me two years ago,” he says. “I’ve been at it all my life – my mom enrolled me in a cartooning class when I was 7 – but I wasn’t sure how I’d ever make a living at it.”

A friend called and asked him to paint a mural for the friend’s business. People saw it, heard about him, sought out a muralist – lots of routes – and the phone kept ringing. “I just thought I’d try this till people stopped calling,” he says. “They’re still calling.”

Working with murals means he’s usually creating an ad or a public art piece, and the two are vastly different things. “For advertising, you want colors that pop, that draw the eye,” he explains. “For other subjects, like historical figures, you want more somber, serious, even reverent tones. For my own palette, I love purple and yellow because they can really capture that golden-hour magic.”