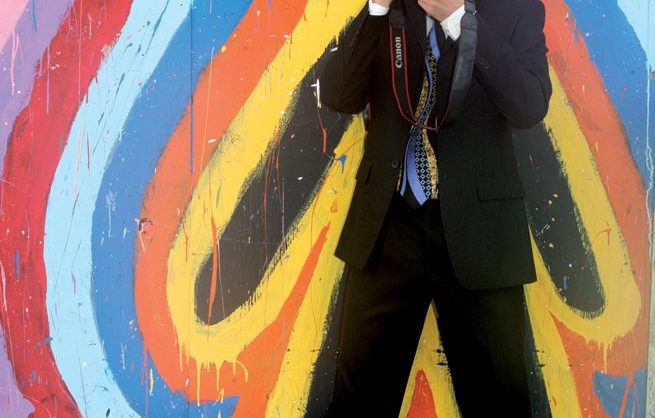 One might argue that a good story is a good story, but the ability to tell a story well is a gift, and a compelling storyteller is just as important as the story itself. Most fine storytellers draw upon imagery they’ve seen and experienced in a lifetime spanning several decades, so when a storyteller as young as Alexander Knight pulls you into his art, you know there’s more to the recent high school graduate than meets the eye.

A wunderkind? Yes, but it’s probably fair to say that Alexander Knight was genetically predisposed to becoming one of the region’s most promising young filmmakers. His mother, M.J. Alexander, is an award-winning photographer and journalist whose book PORTRAIT OF A GENERATION The Children of Oklahoma: Sons and Daughters of the Red Earth is beautifully captured in a promotional video that Alexander created and brought to life with a stirring musical soundtrack (“Beneath the Crimson Moon”) composed by his father, Ed Knight, director of music composition at Oklahoma City University.

Although Knight, like a true artist, maintains that inspiration can come from anywhere, he’s particularly drawn to old movies and everyday life experiences, including interaction with people.

And if anything predicts success for this young man, it’s that last part: interaction with people. Not by text. Not by Facebook or Twitter. Not by email. Real, live, face-to-face interaction.

“One of the things I love about my mom,” Knight says, “is her amazing way of engaging with people. I try to take after her in that way.”

Knight accompanied his mother on a journey across the state – a visual odyssey – to interview and photograph the Oklahomans who appeared in Portrait of a Generation. The experience made a lasting impression on Knight. “We met people on the side of the road, and we’d just start talking to them. They all had a story and they were so interesting,” he recalls.

As the product of a generation raised with technology, Knight reveals a more organic philosophy to telling a story. “What makes something timeless,” he observes, “is not done with special effects. Special effects really date a piece. The timelessness of a good story comes from the genuine emotion it evokes, and that’s something that can’t be outdated.”

Whether he realizes it or not, evoking emotion is a hallmark of much of Knight’s work. Sometimes that emotion stems from nostalgia, as in “Catoosa Blue,” a 13-minute documentary about the town’s iconic Blue Whale, a once beloved landmark along old Route 66 that had fallen victim to vandalism and disrepair, and more recently, was lovingly restored to its original glory by the curator whose father had built Blue.

Although the young filmmaker gains even more material for his work on cross-country family vacations, along with his younger sister, stellar oboist Allegra, Knight has a strong sense of connection to Oklahoma and feels a commitment to give back to the community through his art. He recently collaborated with his mother to create a promotional video for the YMCA of Greater Oklahoma City’s capital campaign,  consisting of three mini-videos that highlight several of the organization’s community outreach programs. While his mother took still photos to support the video, Knight provided the video and editing for the piece. “Sometimes we have a different take on what we think the end product will be, but I can usually tell where’s she’s coming from, so I think I have a pretty good sense of how to convey what she wants,” Knight observes.

As Knight happily amasses awards and recognition for his distinctly fresh and often unexpected approach to visual storytelling (including Best of Show citations from Oklahoma Christian University’s Brass Ring Awards and several selected works screened in the deadCENTER Film Festival), he concentrates on his future, as most recent high school graduates do.

This month, the brand new Bishop McGuinness alumnus will add the joyfully quirky “Monkey Business” film short to his deadCENTER Film Festival repertoire and will participate for his fifth year at the Oklahoma Arts Institute at Quartz Mountain, collaborating with other promising visual and performing artists.

Veteran Oklahoma City videographer and producer Rick Lippert of Lippert Media echoes many professionals in new media with his high expectations for Knight. “Knowing that film is a collaborative art, I’ve been impressed that Alexander has allied himself with other young talented filmmakers. Together they have made some skillful visual stories,” Rick says.

“I’ve watched hundreds of short films made by high school students as I interview them for their application to the Summer Arts Institute at Quartz Mountain, and Alexander’s films have been some of the most inventive that I’ve seen,” Rick observes. “He’s truly a gifted young filmmaker with a vision.”

2010: Continuous screenings of films “The West” and “You Must Have Graduated With Honors”

Awarded a Best of Show and two golds, one silver and two bronzes in the new media category for the Brass Ring Awards, a national college and high school design competition administered by Oklahoma Christian University. Spring 2010 and 2011.