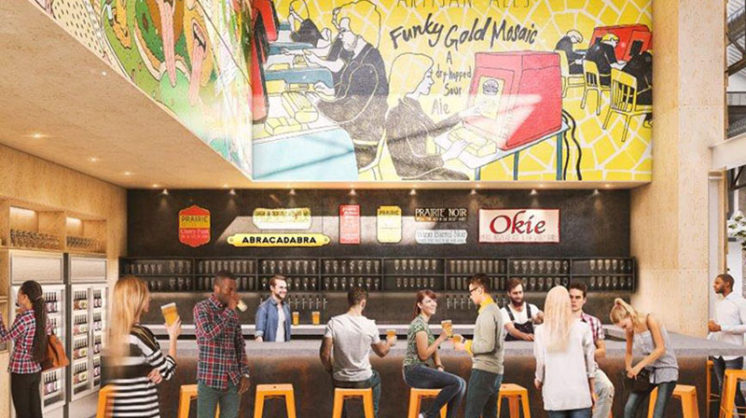 The Tulsa-based brewery will also offer a creative space for artists in the former warehouse building at 3 NE 8th Street. General manager Greg Powell said they plan to offer eight different beers – which will rotate seasonally – focusing on those beers where "freshness is paramount."

He says, "Our new location will be brewing the same styles of beer that Prairie is known for, namely farmhouse ales, stouts and sour ales.

"However, because operating a brewery with a taproom alleviates packaging, storing and shipping concerns, we can focus on beers where freshness is paramount.  To that end, we will be making IPAs, imperial IPAs, pale ales and lagers. These styles are best when fresh, and there's no fresher place than the source."

There will be no kitchen, but guests are allowed to bring food into the taproom, which has around 100 seats, according to Powell.

Architecture firm Allford Hall Monaghan Morris is designing Prairie Artisan Ales' new space in the 1940s building, which is set to open for business four to six weeks after construction is completed – that allows time for the beers to be brewed and ready for opening.

Powell said they have several more breweries to come, adding, "With the law change allowing breweries to sell beer on site, beer lovers can now come experience the process from start to finish.

"Being able to drink beer in the same place it's made, with the people who make it, creates a sense  of community. That connection to the people and process is what makes it special."