Creativity on the Spot in The Elaborate Collaborate - 405 Magazine 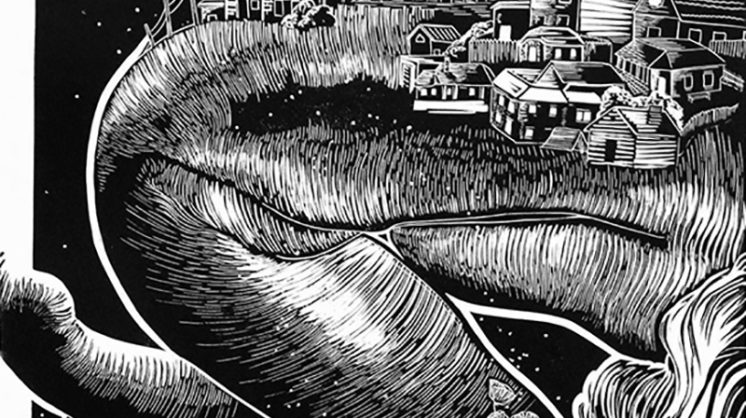 Artist Pablo Picasso Believed That Part Of Art’s Purpose Was To “Wash The Dust Of Daily Life Off Our Souls.”

Stages and schools of art have inevitably built on – and sometimes rebelled against – their predecessors, giving art as a whole an ever-evolving nature, leaving the art lover and the artist both on a constant quest to find new ways of washing off that daily dust.

Curators romy owens and Kelsey Karper have put together an exhibition that they believe will breathe some fresh air into the Oklahoma City art scene, and provide both a new challenge for local artists and a singular experience for viewers.

The Elaborate Collaborate is a cooperative artistic endeavor by 54 area artists, modeled on the “exquisite corpse” method. A spin-off of an old game called Consequences where participants write endings to each others’ sentences without knowing the beginning, the “exquisite corpse” (cadavre exquis in French) was a technique employed by artists of the Surrealist movement.

Paper was folded and each artist in turn drew a portion of a figure, and then passed it on to the next person, who added their own part without looking at the previous work. (The term is thought to have come from a sentence that issued from one of the group’s first experiences playing the word version of the game; “Le cadavre exquis boira le vin nouveau,” or “The exquisite corpse shall drink the new wine.”)

The exquisite corpse served as an almost ideal device for transmitting the ideals of Surrealism, flouting logic and expected order, but it also created another level of art because of the collaborative energy. The man often credited as the founder of Surrealism, André Breton, said of the exquisite corpse, “… We had at our disposal – at last – an infallible means of sending the mind’s critical mechanism away on vacation and fully releasing its metaphorical potentialities.”

By utilizing the exquisite corpse for The Elaborate Collaborate, owens and Karper hope to energize the collaborators (a combination of video, sound and visual artists) to produce an original experience for themselves and the exhibit’s visitors.

“Through collaboration, artists are able to make art that they might not be able to make on their own,” owens says. “Part of the beauty of working with other people is that you’re inspired to try new things and move in different directions, or just explore different ways of making art. That idea drove the whole concept.”

The main body of the work will be on paper, and individual artists have already begun work on their original contributions. These foundational pieces will be installed at IAO in a panoramic ribbon, and then the next phase will begin, with artists going into the gallery over a five-week period, and doing additional work on any of the originals that they choose.

The exhibit’s opening on July 17 will enable patrons to see the beginning stages of the work, but visiting IAO during the weeks that follow will provide the chance to watch the art unfold; artists will come in to work on the piece at various times, and the public is welcome to witness the process (during IAO operating hours, of course).

“I think this access to artists at work is one thing that makes this exhibition really special,” says Karper. “It’s unusual to get that kind of experience in a gallery setting.”

The exhibit also includes a 10-minute video, produced successively by 10 video artists and one sound artist, and on July 30, local poet and visual artist Kerry Shadid will host an Exquisite Corpse Poetry Event.

In choosing artists to invite to participate, owens and Karper say that one of the biggest criteria was a comfort with working on paper. owens says that this meant omitting talented Oklahoma City artists that worked in other media, and also encountering artists that were new to her.

Participating artists represent a diverse range of not only media used (Lisa Jean Allswede uses thread and a sewing machine as part of her process), but scale; Stillwater artist Amanda Sawyer’s drawings are a marvel of detail in their diminutive dimensions, while one of contributor Dylan Bradway’s most recent endeavors was working (along with Yatika Starr Fields and Kristopher Kanaly) on the 9th Street Braid mural.

The variance in style and scope among the artists is sure to create a unique work, and owens and Karper are thankful not only to have the chance to bring an experience like this to Oklahomans, but also to be able to provide it at no charge to the public.

The exhibit’s GoFundMe page (gofundme.com/elaborate) was instrumental in building support for the show to happen, but a grant from the Oklahoma branch of The Awesome Foundation (awesomefoundation.org/) helped the curators achieve their goal, and provided a welcome boost of encouragement. The GoFundMe page is still online to receive additional donations, and also provides a complete list of the artists involved.

“We feel very strongly about the exhibit being free,” owens says. “When there’s a fee associated, it’s only accessible to certain people. We want this to reach the community.”

Sharing is a fundamental tenet of art – works are created by one person and viewed by another – and the desire not only to share exciting offerings with the public, but to deepen the style and meaning of that exchange, is an innovative and noble one. Karper and owens believe they’re bringing something new to the metro’s art environment with The Elaborate Collaborate, and they’re anxious to bring the public into the experience.

“Having the chance for people to see artists at work was important to us, certainly engaging artists in different ways and introducing artists to each other was important, too,” owens says. “Most people’s experience with art is, ‘I made this, you can look at it.’ But this … this could literally change every day. Each time you come to the gallery it could be different. I think it’s really exciting.”

The Elaborate Collaborate will open on July 17 and run through August at IAO Gallery, 706 W. Sheridan Ave. For gallery hours, call 232.6060 or visit individualartists.org.