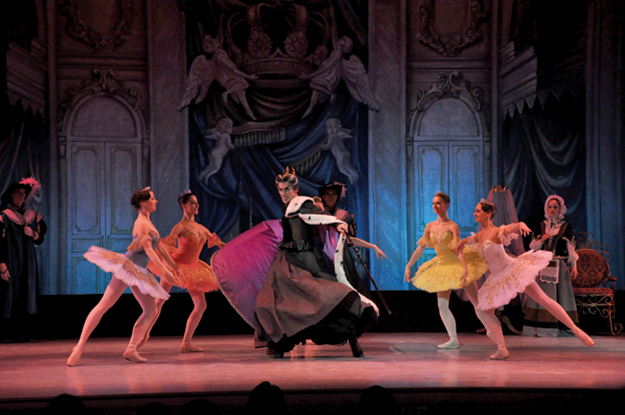 It Was Patterned After The Series of Spectacular Concerts orchestrated by the Ambassador International Cultural Foundation, a string of knockouts that earned the host venue the appellation “the Carnegie Hall of the West Coast.” Its mission, which it’s been pursuing since 1998 and in a palatial facility of its own since 2010, includes “bringing monumental cultural experiences to the heartland of America.” Oh, and house manager Shane Granger believes that “this year’s lineup of performers stands to be one of [its] most impressive yet.” Moving from strength to performance strength has become a reliable joy for audiences, and a matter of course for Edmond’s Armstrong International Cultural Foundation.

The 16th season of mastery at Armstrong Auditorium got underway with an October visit from the Hungarian State Folk Ensemble, which filled the hall with the melodies and movements that have resonated through the souls of its home country for centuries. There’s plenty more to come on the performance slate …

Five guys with matching outfits and shiny instruments do not a world-class ensemble make … unless the players each have virtuosic skill and collectively possess a staggeringly huge repertoire spanning jazz, marches, Broadway tunes, Dixieland, classic American standards, yet more classic Baroque-era compositions and even (as if that weren’t enough) 200-plus wonders of their own creation. Oh, and they’re pretty funny, too.

This is one of life’s guarantees: A 25-year veteran of the Bolshoi Ballet knows a little something about dance. The great Sergei Radchenko founded the Moscow Festival Ballet in 1989 – who better than an internationally renowned Russian company to present Tchaikovsky’s soaring opus “Sleeping Beauty”? And since the 50-member troupe is already set to visit Edmond to start 2014, why not share another wonder choreographed by the legendary Marcus Petipa – Leon Minkus’ “Don Quixote” – the following day?

Among Armstrong’s many amenities, two of the foremost are the Steinway concert grands imported from Hamburg. But a piano, however magnificent, should be more than mere decoration – so Armstrong College faculty members and longtime performance partners Mark Jenkins and Ryan Malone have assembled a Liszt of classical favorites (sorry about that) for an evening of intricately entwined ivory-tickling.

Founded in 1950, the HSO is billed as the most significant musical institution in the north of Israel – and speaking of significance, this is its first ever American tour. The ensemble is working up a catalog of classical favorites as well as a viola concerto by one of its home nation’s foremost contemporary composers; a perfect showcase for star soloist Avshalom Sarid.

The German-born Israeli pianist has amassed one of the most glittering CVs in all of professional music, and at the age of 88 he’s still traveling the nation and the world to share his lifelong passion with music students and rapt audiences. His journey to Edmond is as leader of the New York Chamber Soloists Orchestra, who will perform a Mozart concerto in an evening also featuring Beethoven and Copland. Don’t miss this living treasure.

Blockbuster ensemble performances with glittery costumes and chorus girls and confetti can be electrifying and do have their place in show biz … but sometimes it’s rewarding to give a consummate performer a microphone, a spotlight and a piano and let him be the show. Tony winner and Broadway veteran Mitchell returns to the Armstrong stage with his resonant baritone in an intimate evening of show tunes, solo-style.

An Evening With Midori

In 1982 an 11-year-old Japanese violinist moved to America and made her concert debut with the New York City Philharmonic – and in the three decades since she has steadily ascended in international renown. Fresh off her 30th anniversary tour, the single-named soloist can still perform bariolage with the best of them, delivering haunting beauty, blistering intensity and an evening of sublime melody for her fortunate listeners.

One of Handel’s most powerful compositions concludes the Armstrong Auditorium 2013-2014 season, as the Herbert W. Armstrong College choral union, accompanied by professional soloists and orchestra, will perform the piece in its thunderous entirety – cause enough in truth for a standing ovation.

Hail to the Hall

According to Granger, the quality of Armstrong’s performance schedule is matched only by that of the venue itself. While he might not be considered an entirely neutral observer, he does have a solid case: The 823-seat auditorium is adorned with more than a dozen chandeliers dripping with Swarovski crystals, a seven-foot Baccarat crystal candelabra commissioned by the Shah of Iran, American cherry wood veneers, Spanish marble and Persian onyx. And perhaps most importantly, with only 75 feet separating the stage from the back wall, every seat has an uninterrupted sight line and the benefit of the facility’s perfectly engineered acoustics. To call it “palatial” might actually be an understatement.

Tickets for individual performances, whole-season passes and FlexPass subscription plans for five or more shows are on sale now, and though the magnificent auditorium has a massive feel, it also has finite seating. To secure a vantage point for greatness, visit armstrongauditorium.org
or call 285.1010.