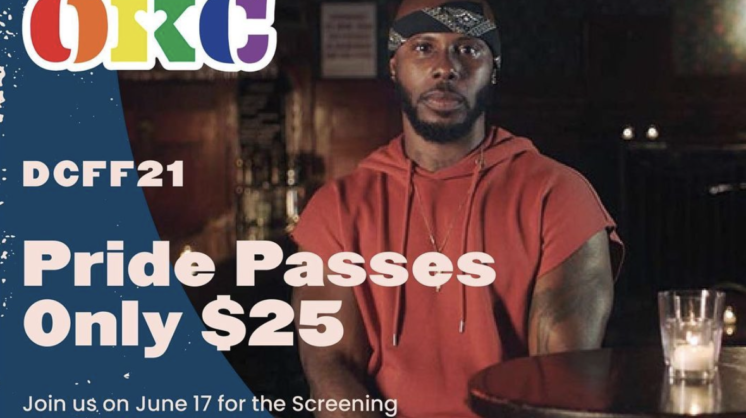 Running from June 10 to June 20 this year, deadCenter Film Festival is Oklahoma’s largest film festival, and it’s celebrating Pride in a major way. The festival has always supported LGBTQ+ creators and showcased movies with LGBTQ+ characters, but new this year, all of deadCenter’s queer programming can be accessed through the purchase of a Pride Pass for $25. In addition to access to the films, Pride Pass holders will be able to attend an in-person Pride happy hour. Purchase of a Virtual Pass, which grants the holder access to all the movies that deadCenter has to offer, will be able to access the Pride Pass perks as well. deadCenter’s queer films were curated by local filmmaker Laron Chapman, and I had the opportunity to speak to him about the Pride Pass, his work, and representation in film.

In 2018, Laron Chapman’s film You People debuted at deadCenter Film Festival and was met with resounding success. You People is a commentary on race and identity, and its story comes from a personal place. The film is about the main character’s struggle with racial identity, but all the supporting characters have some kind of identity struggle as well.

“I was very surprised to see how many people responded to the message of it,” says Laron. “What I was experiencing that I thought was subjective was actually universal.”

The festival has always supported queer creators, but this is the first year that they’re being so prominently centered. The short films selected to be part of deadCenter’s June 17 Pride programming range from nonfiction documentary piece to sci-fi drama, either about the LGBTQ+ experience or featuring LGBTQ+ characters. Half the films are directed by women, and Chapman feels it’s especially important to hear women’s stories.

Representation in film is important for those groups that aren’t traditionally seen in mainstream media, and Chapman emphasizes its importance both on screen and in the writer’s room.

“It’s not just that we have content that people see in front of the camera, it’s the people behind the camera,” he said. “We want to see queer producers, queer directors. That’s how we’re going to get more authentic representation.”

The June 17 slate of LGBTQ+ short films is designed to run close to the day Oklahoma City has its Pride Parade, which is being organized by Pride Alliance. This is the first year that Pride Alliance will be hosting the Pride Parade downtown at Scissortail Park, and the downtown location makes it easier for the parade to connect with a wider breadth of the community.

“deadCenter has always been a huge propoment of diversity and showing films and art that are from queer creators and sharing queer stories,” says Pride Alliance Vice President Ryan Tomlinson. “Get your Pride Pass, expose yourself to queer art, and listen to queer stories.”

deadCenter’s designated Pride programming will be available on June 17 with the purchase of a Pride Pass or Virtual Pass. You can look at the deadCenter schedule or purchase your pass at deadcenterff2021.eventive.org.