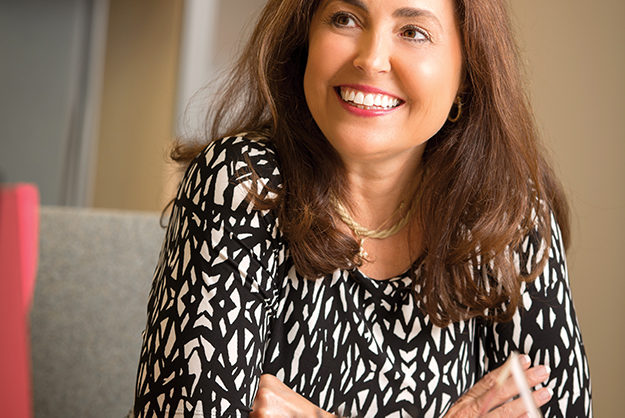 Despite several unforgettable milestones throughout her nonprofit career – among them, the 1995 bombing of the Alfred P. Murrah building, the historic May 3, 1999 tornado and last year’s May 20 tornado outbreak – Hampton’s unshakable optimism and passion for service define the untold ways one woman can make a difference.

What’s your hometown?  I was born in Lubbock, but I grew up in Del City.

How long have you been married to your husband, Mike? 27 years.

What did you study in college? I have a degree in psychology from OU.

Have you spent your entire career in the nonprofit sector? Yes. I was at the Oklahoma Center for Nonprofits as CEO for four years before I came to the United Way. Before that, I was the CEO for the Central Oklahoma Chapter of the American Red Cross for 16 years.

If you weren’t working in the nonprofit world, what other profession would you choose? I can’t even imagine doing something else!

What career did you want when you were a kid? I wanted to be a flight attendant or a teacher. I’d love some peanuts, thank you.

What’s the best part of your job?  The people I get to work with: the volunteers, the staff, the board, the nonprofit agencies and the clients they serve.

Do you have any phobias? Heights.

Any guilty pleasures? Yes. Food and wine. Especially good German food. My mother is German and her homemade German food is the best ever!

What was the best decision you ever made?  Marrying Mike Hampton and having our boys, Christopher and Jonathan.

Who do you think you could be mistaken for? Apparently, a lot of people. People always come up to me and say, “You look familiar … ” I must look like “every woman,” or a stock photo!

What do you wish you’d started doing sooner? Traveling.

Do you have a favorite hole-in-the-wall in OKC? I love Leo’s (the original). That cake is to die for. I’m also a fan of Nomad and Vito’s.

What should everyone try or experience at least once in their lifetime? Volunteering. I promise, they’ll get more out of it than they put in!

What are you currently learning how to do? Think before I speak. It’s not going well. You can count on me to give you my honest opinion.

Which words or phrases do you overuse? I probably say “amazing” way too much, but when I say it, I really mean it. And I say, “I’m confused…” a lot, which my staff now recognizes as code for, “How in the world are you going to pull off something like that?”

How do you define happiness? Being with the people you love and being able to do what you love.

What’s less important now than it used to be? Material things.

If you decided to change your name, what would it be?  I never really liked “Debby.” I was named after Debbie Reynolds, probably like every other Debby/Debbie. I’ve always liked the name Rachel.

Do you have a motto? I always go back to a quote that one of my teachers used to write out every single day in grade school: What you are is God’s gift to you. What you become is your gift to God.
Wow. That’s a lot more inspiring than the motto posted in Larry Hahn’s 7th grade math class, and I quote, “There is a time and a place for everything. This is the time and the place for math.”

What talent would you most like to have? To speak another language and to play a musical instrument – but it would have to be a portable instrument, like a guitar, not a piano.

What day is your birthday? December 19.

What’s the last thing you lost? My mom’s engagement ring. It haunts me to this day.

If it kills you, what’s the one thing you’ll accomplish by the end of the year? That the United Way raises the money needed to fund 128 programs of 61 nonprofits in Central Oklahoma.

What is a risk worth taking? Putting yourself out there. Giving your time or making any change that could make another person’s life better.

What message would you put inside a fortune cookie? Make a difference.